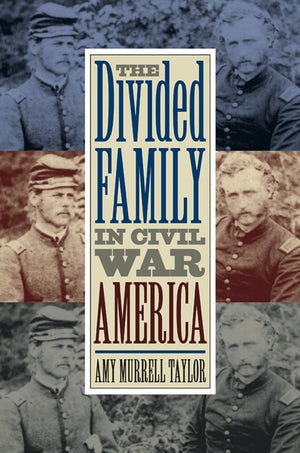 The Civil War has long been described as a war pitting "brother against brother." The divided family is an enduring metaphor for the divided nation, but it also accurately reflects the reality of America's bloodiest war. Connecting the metaphor to the real experiences of families whose households were split by conflicting opinions about the war, Amy Murrell Taylor provides a social and cultural history of the divided family in Civil War America.

In hundreds of border state households, brothers--and sisters--really did fight one another, while fathers and sons argued over secession and husbands and wives struggled with opposing national loyalties. Even enslaved men and women found themselves divided over how to respond to the war. Taylor studies letters, diaries, newspapers, and government documents to understand how families coped with the unprecedented intrusion of war into their private lives. Family divisions inflamed the national crisis while simultaneously embodying it on a small scale--something noticed by writers of popular fiction and political rhetoric, who drew explicit connections between the ordeal of divided families and that of the nation. Weaving together an analysis of this popular imagery with the experiences of real families, Taylor demonstrates how the effects of the Civil War went far beyond the battlefield to penetrate many facets of everyday life.

​Are We Really Facing a Second Civil War?

Two books out this month warn that this country is closer to civil war than most Americans understand. In “How Civil Wars Start: And How to Stop Them,” Walter writes, “I’ve seen how civil wars start, and I know the signs that people miss. And I can see those signs emerging here at a surprisingly fast rate.” The Canadian novelist and critic Stephen Marche is more stark in his book, “The Next Civil War: Dispatches From the American Future.” “The United States is coming to an end,” Marche writes. “The question is how.”

Instigators of civil violence, she writes, tend to be previously dominant groups who see their status slipping away. “The ethnic groups that start wars are those claiming that the country ‘is or ought to be theirs,’” she writes. This is one reason, although there are violent actors on the left, neither she nor Marche believe the left will start a civil war. As Marche writes, “Left-wing radicalism matters mostly because it creates the conditions for right-wing radicalization.”

It’s no secret that many on the right are both fantasizing about and planning civil war. Some of those who swarmed the Capitol a year ago wore black sweatshirts emblazoned with “MAGA Civil War.” The Boogaloo Bois, a surreal, violent, meme-obsessed anti-government movement, get their name from a joke about a Civil War sequel. Republicans increasingly throw around the idea of armed conflict. In August, Representative Madison Cawthorn of North Carolina said, “If our election systems continue to be rigged and continue to be stolen, then it’s going to lead to one place and that’s bloodshed,” and suggested he was willing, though reluctant, to take up arms.

Are we already in a Second Civil War?  I hesitate to use that phrase, because our casualty rates are incomparable to the 600,000 deaths of the first Civil War.  Still, I understand the point.  Ours is a divided nation and the divisions are leaving scars in our relationships and in mental health.   The primary agents of this war are cable news, social media, and partisan politicians.

The war is concentrated in two warring parties, Republican and Democrat.  Members of both parties feel that they are fighting for “the soul of America” and that members of the other party are, at best, misguided and, at worst, morally tainted.  The intensity of these feelings is ratcheted up when partisans couch their feelings in terms of religion.  Each party thinks God is on its side.
​
The civil war sometimes happens at the dinner table.  Often for the sake of harmony, families will talk about sports, food, movies, and school – anything but politics, religion, and the culture wars.  But if, for one reason or another, the divisive subjects emerge in conversation, the results are disturbing.  Family members don’t know how to bracket their convictions, at least for a moment and hear the feelings and perspectives of fellow family members on the “other side.”
Open Horizons