"The only way to weave happily through this two and a quarter hour fantasy is to surrender to the tantalizing, playful, disjointed interactions and embrace the wildly unusual joy of letting go of reason and judgment."

“I’m Thinking of Ending Things” feels like a movie that could be hurt by the Netflix model. It’s not something that should be watched while being distracted by your phone. It demands attention to allow its mood to find its way under your skin or it really won’t work. It has a remarkable cumulative power, even as it narratively seems to make less and less sense. You have to give yourself over to it, and you'll be moved by some of its later imagery even if you have no idea how to explain why. Kaufman is trying to find a storytelling approach that goes beyond simple plot, conveying the loneliness and relative stasis of human existence. It’s a movie in which the two leads spend most of the film in a moving car and yet it feels like they can’t get anywhere. One says, “you slide into the onslaught of identical days,” which doesn’t just have added meaning in 2020 but seems essential to Kaufman’s approach. Yes, of course, all days are identical, because we are the ones who bring meaning to them, sometimes falsely and sometimes because we have to in order to survive these identical days. The title starts to turn in on itself. You can’t end things. Nothing ends. It just goes on. And even thinking of ending things could actually break the world in front of you.

Are you ready? The inimitable Charlie Kaufman has created another enigmatic, creative, and ambitious film which even goes beyond the screenplays he wrote for Being John Malkovich, Adaptation, Eternal Sunshine of the Spotless Mind and his direction of Synecdoche, New York and Anomalisa in its psychological complexity and macabre explorations of joy, sadness, love, family, memory, madness and fantasy.

I'm Thinking of Ending Things is based on the scary acclaimed novel of the same title by Canadian Iain Reid. Kaufman takes the ordinary events and things of our lives and makes them both universal and singular.

We are drawn into the experience of a young man taking his girlfriend for a first time visit to meet his parents on their family farm. We feel in our senses the eeriness of driving in a car on a deserted country road during a snowstorm. We squirm through the social awkwardness at the dinner table. We share the girlfriend's desire to snoop around Jake's childhood bedroom with its bizarre mixture of toys, DVDs, and books. We identify with their mixed-up accounts to his parents about how they met. After an unappealing look at the animals on the farm, a horrible story about the death of some pigs, and a descent into a grungy basement, we are as eager as the girl to leave the farm and go home!

Throughout this psychological thriller, we identify with Lucy (Jesse Buckley) who has been dating Jake (Jessed Plemons) for perhaps seven weeks. She is an aspiring poet who works as a waitress. In her voice-over narration, she expresses her admiration for his niceness but admits she is seriously thinking about ending their relationship. He bores her with his lectures on every subject under the sun.

Getting increasingly confused, Lucy doesn't know what to make of Jake's creepy parents (Toni Collette and David Thewlis) who are both crazy and irritating, not to mention their ability to shape shift from old to young. When Lucy finally convinces Jake they need to leave, we are as baffled as she is to find a Tusley Town Ice Cream store open on a lonely road in the middle of a snowstorm. And, like her, we don't understand why he insists on stopping at his old high school.

Each of us is comprised of a ragtag band of identities, roles, and personas. In order to survive change, we create new personalities. The idiosyncratic characters in many of Charlie Kaufman's films are resilient and fluid characters. American psychiatrist Robert Jay Lifton calls them protean selves. This tendency -- to fantasize aspects of ourselves or assume new identities -- could be what the narrator is referring to when she quotes Oscar Wilde: "Most people are other people. Their thoughts are someone else's opinions, their lives a mimicry, their passions a quotation."

If you want to tap into your protean self, writer and director Charlie Kaufman is your spiritual teacher. Or perhaps you will want to learn a thing or two from the janitor (Guy Boyd) at Jake's old high school, who is one of those isolated persons who plays a larger role than he knows.

After the film is over, you may want to look up these resources, which have shown up in the characters' protean selves:
​
Finally, although it is not quoted in the film, this poem by Rumi speaks to the spiritual challenges facing the characters:

This being human is a guest house.
Every morning a new arrival.
A joy, a depression, a meanness,
Some momentary awareness comes
As an unexpected visitor.
Welcome and entertain them all!
Even if they’re a crowd of sorrows,
Who violently sweep your house
Empty of its furniture,
Still, treat each guest honorably.
He may be clearing you out for some new delight.
The dark thought, the shame, the malice,
Meet them at the door laughing,
And invite them in.
Be grateful for whoever comes,
Because each has been sent
As a guide from beyond.
​
— Jelaluddin Rumi in The Essential Rumi by Coleman Barks 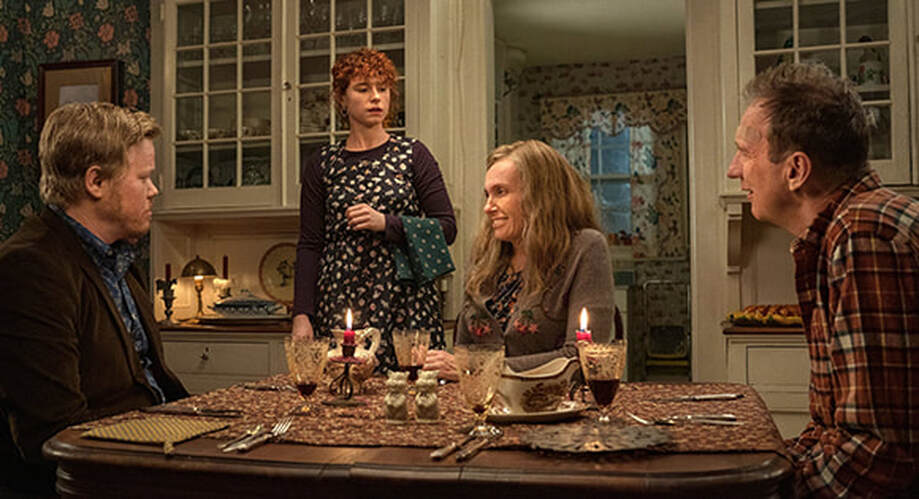 ​That’s the first line of Frederic and Mary Ann Brussat’s review of the film I Think I’m Going to End Things, directed by Charlie Kaufman..

​Having seen the film now, my answer is: “No, I wasn’t ready.”  I wasn’t ready for its inexplicably engaging and macabre presentation of “joy, sadness, love, family, memory, madness and fantasy.”  The film left me wondering what role the gruesome, shocking, scary and strange might have in what some call ‘spiritual integration.’

​I don’t have an answer, but the Brussat’s provide a springboard for reflection.  I quote their paragraph in full:
​

​Each of us is comprised of a ragtag band of identities, roles, and personas. In order to survive change, we create new personalities. The idiosyncratic characters in many of Charlie Kaufman's films are resilient and fluid characters. American psychiatrist Robert Jay Lifton calls them protean selves. This tendency -- to fantasize aspects of ourselves or assume new identities -- could be what the narrator is referring to when she quotes Oscar Wilde: "Most people are other people. Their thoughts are someone else's opinions, their lives a mimicry, their passions a quotation."

​If you are influenced by existentialist philosophy -- Heidegger's in Being and Time, for example -- you may think that there is something inauthentic in creating yourself by mimicking other people and presenting their opinions as your own.  But I wonder if, by contrast, it isn't to some extent inescapable.  How can we separate ourselves from others so sharply that we 'our' opinions are 'ours' alone?  And where do our thoughts really come from?  Only from ourselves?  I doubt it.

And then there is the macabre.  So much of this film is itself macabre, gruesome and a little frightening.  Can we so isolate ourselves from the gruesome that we pretend it is entirely 'other' to us.  When it scares us, doesn't the very fright reveal something about us, too?  Our need to be safe, secure, protected from the gruesome.  Maybe.

​Still, I wasn't ready.  I cannot say that I enjoyed the film.  But I can say I'm glad I watched it and that I'm still thinking about it.  I think that means it was good.