A Spirituality in Playlists

Musical patchworks as lures for feeling 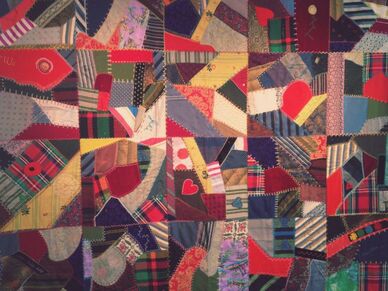 ​People speak often of the song’s unique ability to transform, and I agree with them: songs transform me. They transport me. There are thousands that I love (and many more that I love to hate). Songs have healed me, have broken me, have come to me like an angel at just the right moment and helped me, have become my worn-out personal anthems for one season or one love or one distant place.

Collecting songs and quilting them together into playlists, though, is what my spirit most often craves. I like these collections of songs so much because they can create something larger and more complex than just a song or a single album. A playlist is like a fingerprint because each playlist-maker has a unique set of experiences that makes the way that they feel and make connections between songs vastly different. A playlist is often varied and weird and winding because the person behind it is even more varied and weird and winding. It's like a patchwork quilt: each piece has a unique meaning to the listener, and as the pieces are sewn together their meanings morph and grow to form an intricate whole.

A list of some of the playlists I’ve made, just so you get the idea:

I’ve created dozens upon dozens of them. I'm sure that at least one or two friends have looked at my Spotify page and thought I was a bit obsessive! I will admit that I do spend a little more time on it than I probably should. But I'm not ashamed of it. For me, making playlists is not just a creative or organizational practice; often it becomes a spiritual practice, too. It brings me a feeling of clarity, relief, and satisfaction that few other outlets can provide.

A prayer
A playlist can help me focus my energy and push my thoughts in the right direction--toward contemplation, transformation, gratitude, rest. I collect songs that to me evoke a certain quality and I use this collection again and again. A litany of songs. I'm an anxious flyer, so I made a playlist for plane rides. It’s all sappy love ballads and upbeat songs, free of language about disaster or falling. It feels like the arms of a guardian angel keeping me afloat.

An exorcism
When I make playlists, I do work to name the effect that a song has on me, the need that it fulfills. Sometimes feelings need to be fully felt to be released. Creating a playlist about something that I need to move on from helps me to articulate and understand my feelings until I find a way to feel better again. I have a few playlists that exist as personal histories, journal entries from times in my life to which I would rather not return. I have another that only listen to if I need to lean into my own sadness. I use it when I need to, and I stay away from it when I don’t.

An offering
Sometimes I wish that I'd grown up in a time when it was more common for musical recordings to be things that you held in your hand. I remember the mix CD's that my mother's best friend made for her when I was a child. I remember putting my own voice onto cassette tapes and recording songs from the radio. But I think that in ways beyond the tangible, a playlist can be just as special as mixtapes and CD's used to be. Creating a playlist as a gift for someone I love makes me take time to think about who they are, what they like, what we have in common. I collect songs that I know they love. I rediscover old songs that might trigger in us the same memories. I might take a vulnerable step and offer to them new songs that I love in the hopes that they would love them, too. I do my best to show them that I know them, to give them something that is, to me, less tangible but often more meaningful than material gifts.

I think that the overarching spiritual effect that playlists have on me is a sense of deepening. Working to deepen my understanding of myself, of my emotions, my loved ones, and different seasons in my life through the assembly of unique musical collections. I highly recommend playlist-making to anyone looking for a spiritual practice that can lead many ways--to reminiscing, to hoping, to giving, to moving on, maybe even to a little dancing.

In the spirit of this article, here is a playlist for you of songs that make my soul happy. Maybe you'll find something you enjoy.
​Thanks for reading!
Open Horizons