The repetition of horror numbs the mind: Only 11 days ago there was Buffalo, New York, with a man driven by racism gunning down 10 people at a supermarket. The next day another angry man walked into a Presbyterian church in Laguna Woods, California, and killed one person and wounded five others. And now, Uvalde, Texas — a repeat of what was once thought unfathomable: the killing of at least 19 elementary school children in second, third and fourth grades.

Like everyone else, open and relational (process) thinkers are shaken by recent mass killings in Buffalo, Laguna Woods, and Uvalde. We rightly respond, not with abstract considerations of how God is related to killing, but with empathy, lamentation, anger, collective repentance, and political action aimed at reducing gun violence. The needed wisdom is practical, not theological.

It is only later, in retrospect, that some might also ask more theological questions. Why does God let these things happen? Where is God, anyway?  Here open and relational (process) theologians will predictably say:
​
For some people these ideas will be helpful. But they are blasphemous and best ignored if, in the immediacy of the killings, a consideration of such ideas directs attention away from the victims to God. God can take care of Godself. We need to take care of one another.

The key is to focus on the sixth idea: that God is within each of us as a call toward creative transformation. Toward what are we called? I think we are called toward five things: (1) empathy, (2) lamentation, (3) anger, (3) historical honesty, and, absolutely essential, (5) practical action.

The empathy is the heart of the matter. We need to hear the stories of those who suffer, share as best we can with them. They need to feel our listening, our caring, our companionship. In so doing we participate in the deep listening which is God, and which likewise shares in the suffering.

The lament and anger are as important as the empathy, and they take us beyond bland platitudes we might otherwise fall into. Rabbi Bradley Artson's poem on this page, following the shooting in Las Vegas five years ago, communicates the feelings anger and lamentation:

What is idolatry? Allowing the same sin to repeat again
And again and again. Worshiping the interpretation
Of the law so that killing is frequent,
Widespread, almost normal.
Aren’t we told to live by our faith?

Why does this lament never end?
Because we wring our hands,
offer yet more prayers,
succor the victims,
mouth bland platitudes,

​The historical honesty is also important. We Americans need to understand that our very history is founded on violence, with guns as part of our collective psyche. This violence is sin, pure and simple, says John Cobb below: violence begets violence and guns beget guns. As Cobb explains, we must acknowledge and "turn around"  or repent from our history, not pretending that we are diverging from a golden era of peace. No such era exists. For my part, I look for gun-owners who have the courage to give up their guns in a public way, for the sake of a more loving society. I yearn to see an "I Give Up My Guns Movement" in America, for God's sake.

And, of course, the practical action is important. Nicholas Kristoff of the NY Times offers nine steps we can take as a society. It is tempting to think that the action comes first, but I think the five responses occur together, with persistence, for however long it takes.

​
​And Now Las Vegas:
A Lament That Never Ends

This is a lament that never ends …

Another mass killing
Another person who transformed a weapon
Into the angel of death,
Into the plague of the death of the firstborn
(and then some),
Into a modern herem, the biblical command to exterminate
Men, women, children, all.

This time it was Las Vegas,
Before that it was Orlando,
San Bernadino,
Charleston,
Marysville,
Newton,
Aurora Colorado … and let us say “Amen.”

We could tour the country, bathed in the blood,
But not the blood of the lamb.
These sacrifices don’t cleanse,
They don’t atone,
They don’t renew.

What is idolatry? Allowing the same sin to repeat again
And again and again. Worshiping the interpretation
Of the law so that killing is frequent,
Widespread, almost normal.
Aren’t we told to live by our faith?

Why does this lament never end?
Because we wring our hands,
offer yet more prayers,
succor the victims,
mouth bland platitudes,

​
​​Every now and again, in fact, quite frequently, an incident focuses attention on one of the ugliest features of the American character – our propensity to kill one another with guns. We cannot dismiss it as “human nature,” since we are far more murderous than are people of other industrialized countries. One reason and, one would think, the one easiest to overcome, is the widespread presence of firearms in our society.

Why do we do so little to control the ready accessibility of these dangerous instruments? We blame the gun lobby and perhaps the manufacturers and sellers. But that they are able to block political moves to control the sale and ownership of guns says something deeper about our culture.

Our nation was founded on gun violence. It was with guns that we killed the indigenous people and drove them off the land. Of course, they resisted, and this made settling new lands and living near the frontier dangerous. Of course, we blamed the indigenous people for this danger, and used their resistance as justification of genocide. Meanwhile we expected those living in real or imagined danger from the “savages” to arm themselves. This process continued for centuries.

Often the dangers of frontier living were more from lawless Euro-Americans than from the indigenous people. Long after the latter had been fully subjugated, violence shaped the self-understanding of frontier people. Those who wanted to live peacefully were often exploited by others, and there was often a real need for people to defend themselves. The belief that “law-abiding citizens" had the right to defend themselves came to be a part of widespread American self-understanding.

Even when there were no more frontiers in relation to the indigenous people, there was crime. Often criminals were armed. The need of people to defend themselves against such criminals was partly real, but to a large extent it was a way of justifying attitudes that were no longer appropriate. Of course, those who profited from the gun culture encouraged the continuation and even spread of these attitudes.

There is another factor supporting the gun culture. There are hundreds of thousands, perhaps millions, of Americans who are deeply alienated from government, especially the national government. They see government as inherently the enemy of their freedom. They believe that if the government has all the weapons, there is no way left to defend their freedom and that the government will oppress them more and more.

Since it is unimaginable that private citizens could hold out long against the United States army, this idea that stockpiling weapons safeguards their freedom is hard to take seriously. But at the fringes of American society are those who feel that the possession of military weapons gives them leverage against the incursions of the government. Any effort of the government to restrict their acquisition or possession of these weapons only confirms their suspicions of its ultimate intention. And, of course, the occasional crackdown of the government on particular groups of opponents reinforces the hostility of others.

The majority of Americans know that the gun culture is destructive of their wellbeing and would like to see a great reduction in the availability of guns. But they are not organized with the passion and intensity of conviction that sustains the gun lobby. From time to time the majority is aroused to action, but this public will has thus far proved no match for the persistence and organization of its opponents.

Is change possible? As a process thinker I certainly affirm that it is. Over against the self-fulfilling belief that one is threatened by armed criminals or even the government, there are self-fulfilling moves toward trust and non-violence. When the new “enemy” justifying violent self-defense is racially defined, for example, white fear of black lawlessness, the consequence is often discrimination against black people that in fact leads to an increase of lawless violence. This vicious circle can be reversed when whites treat blacks justly and friendships are established across racial lines. Violence begets violence. Generosity begets generosity. Guns beget guns. Nonviolence begets nonviolence. The choice is clear.

​How to Reduce Shootings

Graphics by Bill Marsh, NY Times, Nov. 6, 2017
​
How to Reduce Shootings By Nicholas Kristof
"More Americans have died from gun violence, including suicides, since 1970 (about 1.4 million) than in all the ward in American history going back to the Revolutionary War (about 1.3 million)."

​How to reduce gun shootings?  Nicholas Kristoff's approach is well worth considering.  He recommends a "public health" approach using auto-safety as a model.  "We don’t ban cars," he writes, "but we work hard to regulate them — and limit access to them — so as to reduce the death toll they cause. This has been spectacularly successful, reducing the death rate per 100 million miles driven by 95 percent since 1921." We can do something like this with guns.  Here are some of the public health policies he recommends.

The first step is to understand the scale of the challenge America faces: The U.S. has more than 300 million guns — roughly one for every citizen — and stands out as well for its gun death rates. At the other extreme, Japan has less than one gun per 100 people, and typically fewer than 10 gun deaths a year in the entire country.

The left sometimes focuses on “gun control,” which scares off gun owners and leads to more gun sales. A better framing is “gun safety” or “reducing gun violence,” and using auto safety as a model—constant efforts to make the products safer and to limit access by people who are most likely to misuse them.

Critics will say that the kind of measures I cite wouldn’t prevent many shootings. The Las Vegas carnage, for example, might not have been prevented by any of the suggestions I make. That’s true, and there’s no magic wand available. Yet remember that although it is mass shootings that get our attention, they are not the main cause of loss of life. Much more typical is a friend who shoots another, a husband who kills his wife — or, most common of all, a man who kills himself. Skeptics will say that if people want to kill themselves, there’s nothing we can do. In fact, it turns out that if you make suicide a bit more difficult, suicide rates drop. Here are the figures showing that mass shootings are a modest share of the total, and the same is true of self-defense — despite what the N.R.A. might have you believe. 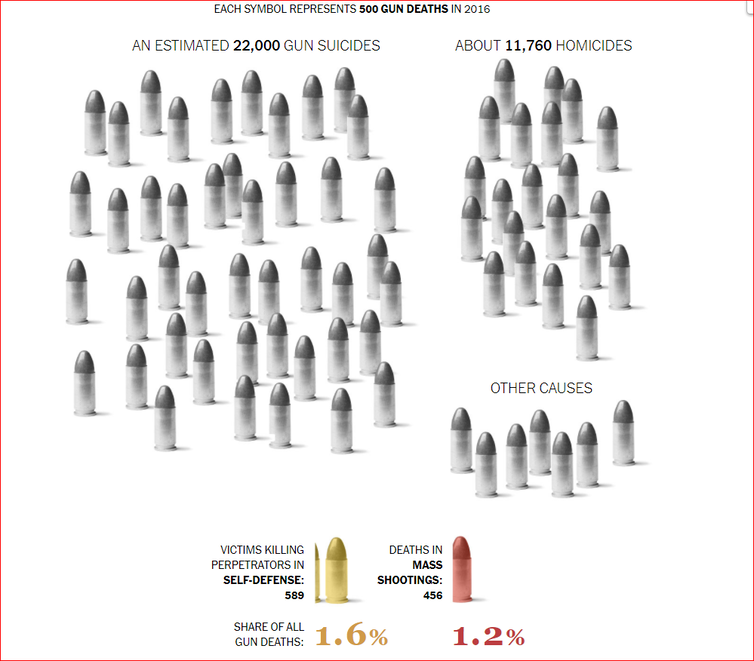