There are physical homelands -- San Francisco, California, and
Marvell, Arkansas, for example -- and then there are musical homelands.

The musical homeland cannot be reduced to one genre or another.
It is instead a lure or aim in the heart: a love of music itself.

This love pulls the musician, like a muse, like a song.
The musician cannot let go of it even if she wants to.

The musical homeland is portable in its way.  It travels
with you wherever you go, adjusting to each situation.

When you meet someone from this homeland, it
doesn't matter where you are from.  You are kin.
​ 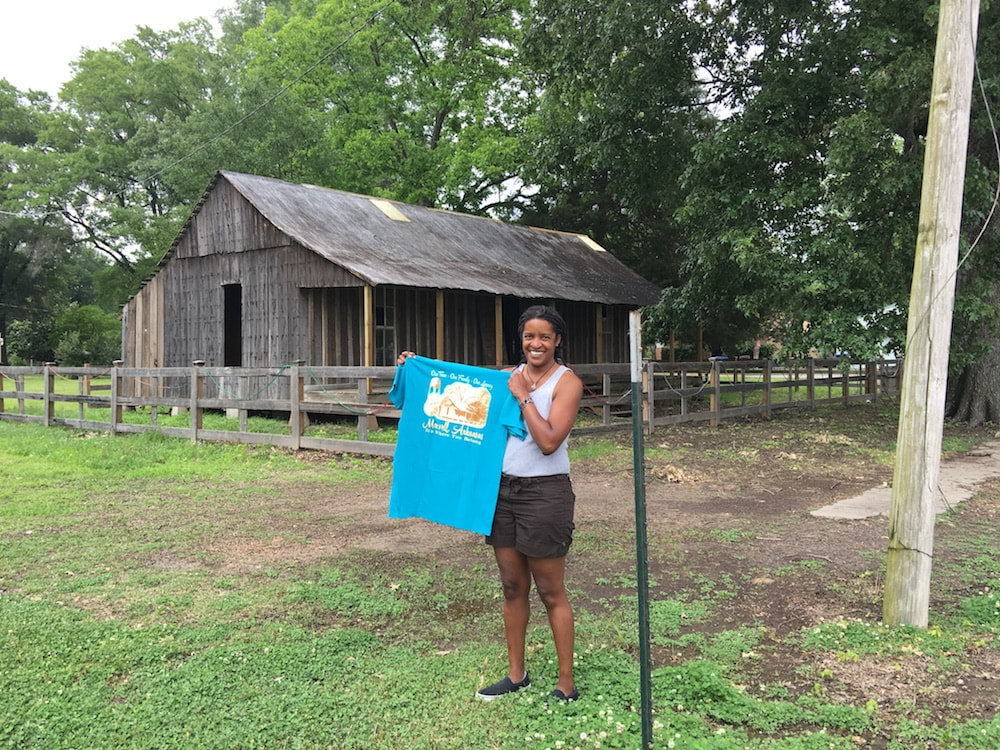 "Amelia Ray is a travelling musician. This California native has been on the road for over 20 years, and has taken her original soul rock music to Iceland, Senegal, Mexico and many cities and festivals across Europe. Her songs have been featured in documentaries and her versions of songs by groups as diverse as Roxy Music, Jellyfish, Squeeze and Toy Love may be found on Burning Sky Records' compilations." (from her website) 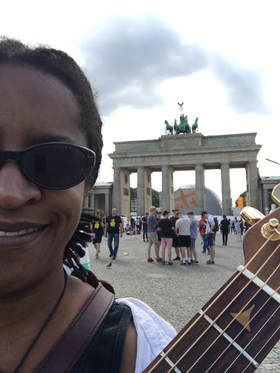 Busking in Berlin (from her Facebook page)
Maybe it seems a little odd to do a story on Levon Helm and Amelia Ray.  He's originally from Arkansas, where I live.  And she's from California.  I was happy and surprised to see that she had taken a pilgrimage to Marvell.  I got the photo from her website.  (Hope that's OK.)

I first heard Amelia Ray on a cruise ship.  She was, as always, a travelling musician, this time in the Gulf of Mexico.

I liked her voice from the outset.  ​She took requests and I asked for three songs: Unchained Melody, To Make You Feel My Love, and Tiny Dancer.   She sang them all.  She called me "Jay from Arkansas."

I asked her to play these songs because I like them and knew her voice would give them life.  I also knew my request might challenge her just a bit:  The chords to Tiny Dancer are a bit complex.  "And oh how it feels so real, lying here with no one near" - there's a shift in key here.  And I wanted to hear her sing "Hold my closer Tiny Dancer."  I wanted to hear the high note.
​
When I first entered the ship, she was singing a song from the 50's by Dion and the Belmonts.  Maybe Runaround Sue?  I can't quite remember.  Then later she did La Bamba.  Or something like that.  Did she do those in Berlin, too?  She looked too young to me to even know those songs; and then I realized that, well, she loves music.  I do, too.
​
It's been a while now, but ​what I most remember now was her smile and also the changes in volume in her voice, especially when she went for a higher register.  I also remember the earnestness of her expression on the more serious songs.

I thought: "I wonder why she is on a cruise ship?"  So I asked her why during a break; and she explained that, despite her yearning for travel, playing on a cruise ship brings in a steady income.  I thought about how difficult it is these days for a musician to make a living as a musician.  I got it.  I told her I'd like to interview her for a longer story on the idea of being a travelling musician, but we never got around to it.  Still, I've been thinking about what it must be like to have been to so many places in the world: to be a "travelling" musician.

Levon Helm would have understood Amelia, too.  Anyone who is on the road for over 20 years needs to love music.  Helm might even understand why Amelia took a pilgrimage to Marvell, Arkansas to see his birthplace.  We need to undertake pilgrimages of body and soul, to places outer and inner, in order to discern who we are, what we want to be, what matters to us.  To recognize our common spiritual homelands.

And when you are a travelling musician like Amelia it becomes especially important to undertake those pilgrimages, because otherwise you can feel in disarray: displaced amid your travels.  You need to remind yourself that you're not crazy.

So here is the point.  I'm guessing that within Amelia Ray as within Levon Helm there is a place invisible to the eye but eminently visible to the heart, and this place pulls you no less than any homeland might pull you.  It is a place where you feel more fully alive than any other place.  For Levon Helm as for Amelia, that place is hearing and performing music.  Almost any kind of music.  La Bamba, yes.  Tiny Dancer, yes.  Lover Lover Lover (see below)?  Yes.  Ana no Potable (see below)?  Yes.  You love music of all kinds, and in this sense you are polyamorous and egalitarian in the highest of senses.

We live in a world where people fight over homelands.  There is a powerful need on the part of many to be "attached to place" and then to claim the place as "ours" but not "theirs."  I see it in the United States, in India, in Europe, in the Middle East.  I also see it in nations where homogeneity is the  rule.  You can visit them, but you sure can't become a citizen.

As a religious person myself, I think that the musical homeland -- the love of music itself -- is a form of spirituality in its own right.  It's a homeland as powerful as Jerusalem, or Mecca, or San Francisco, or Marvell.  A portable homeland.  My own hope is that more people will become attached to music as a spiritual homeland, and a little less attached to physical places.

We need to reclaim our inner nomads.  This doesn't mean that we can't love where we're from.  Levon did.  But it also means that we can love the fact that many places are lovable.  And there's something good about this.

I suspect that this is part of what Amelia Ray knows.  She knows that many places can be loved.  And many times, too. And many languages.  She tells us that in her spare time she likes to learn languages.

Don't we all need to claim our inner Amelia's to some extent.  Wouldn't it be nice if we all, each in our way, were travelling musicians, taking occasional pilgrimages to special places, but loving as many places as possible, without being quite so attached?  Is there time for us to learn this lesson?  Let us pray.