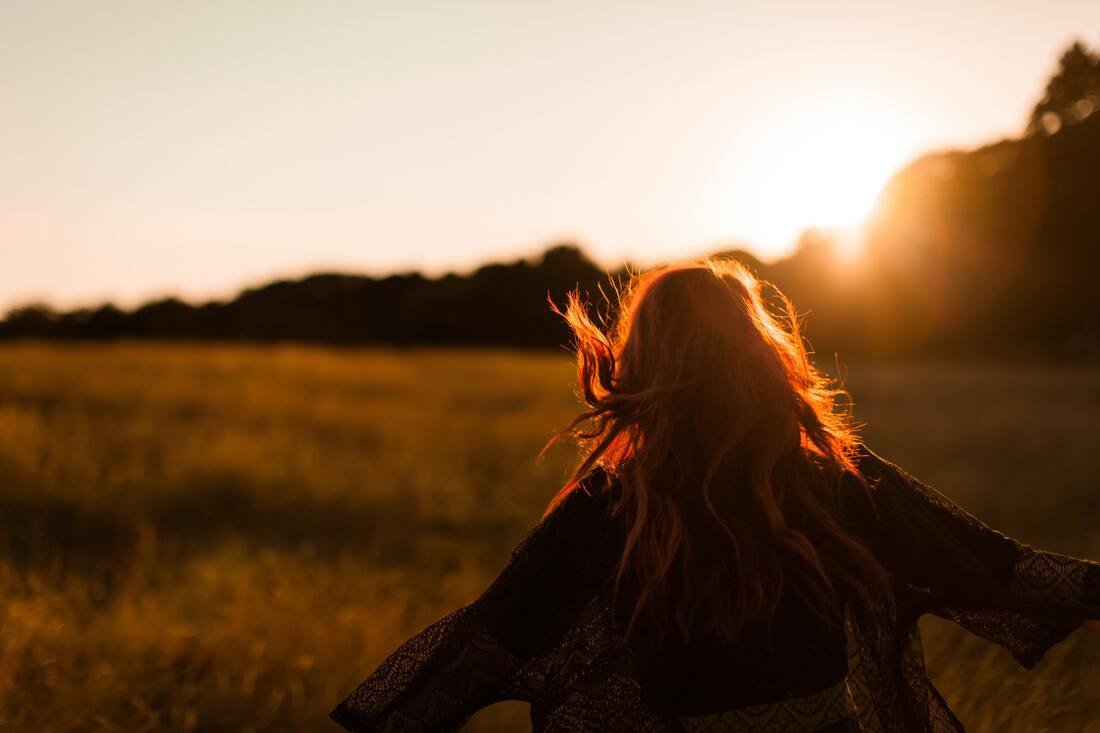 ​
An Intuitive Sense of the Beautiful

God, says the philosopher Whitehead, is the Poet of the World. What can this mean?

Many people think it means God is a creative source of novelty in the world. Perhaps so. But it can also mean that God has the mind of a poet: that is, an open mind that can rest in mystery and uncertainty without irritably seeking after fact and reason.

In his description of the open mind of a poet, the Romantic poet John Keats invites an interesting thought experiment. For Keats negative capability is three activities.

(1) The activity of resting in mystery and uncertainty, allowing ideas to float through the mind without, in Keats' words, "irritably seeking after fact and reason." It is at home with indecision and indeterminacy.

(2) The activity of having an intuitive appreciation of the beautiful.

(3) The activity of being interested in many things, emptying oneself of a fixed identity, so that you can better be sensitive to the world.

A person with negative capability is "not impeded by an identity of their own."

But here let me be honest. I have no idea what divine openness is like from God's own perspective. With regard to God, I myself must rest in mystery and uncertainty myself. The thought experiment above is just that: a thought experiment.

But I do have an idea what openness looks like in human life. Frederic and Mary Ann Brussat of Spirituality and Practice put it this way:

"It is important in the spiritual life to keep an open mind, open to ideas, experiences, people, the world, and the Sacred. Openness is an ability to go with the flow, as Taoism puts it, without expecting predetermined outcomes. It means being receptive to new possibilities, without prejudging them. It is an ability to make yourself available to out-of-the-ordinary opportunities. Indeed, openness to the unknown, the exotic, and the bizarre is usually seen as the mark of a free spirit....You can increase your openness by practicing empathy. Move outside yourself into another's situation. Try to access the other's feelings and ideas. For the purposes of practice, the more eccentric your choice, the better."

If openness of this sort is indeed a spiritual virtue, then a further question emerges. What if theology itself sometimes gets in the way of openness, because it irritably seeks after fact and reason or mental closure. It is too keen on being certain about deep matters,  turning God into an object of the intellectual mastery. In this very activity something is lost: namely the capacity for rest in mystery, indecision, and empathy. Theology then gets in the way of openness and, for that matter, love.

The solution? It is not, I think, to eliminate theology. But it is to recognize that poetry is in so many ways deeper than theology and, as Keats might remind us, more fundamental. Here's to negative capability. Here's to an intuitive sense of the beautiful.

In December 1817 John Keats was returning from the Christmas pantomime with his friends Charles Wentworth Dilke and Charles Brown. On the walk home, he later told his brothers George and Tom, he got into a ‘disquisition’ with Dilke on a number of subjects:

several things dovetailed in my mind, & at once it struck me, what quality went to form a Man of Achievement especially in Literature & which Shakespeare possessed so enormously – I mean Negative Capability, that is when a man is capable of being in uncertainties, Mysteries, doubts, without any irritable reaching after fact & reason – Coleridge, for instance, would let go by a fine isolated verisimilitude caught from the Penetralium of mystery, from being incapable of remaining content with half knowledge.[1]

It is a famous passage; and it is entirely characteristic of Keats that he should come up with one of his most telling phrases (‘Negative Capability’) in such an impromptu fashion, without preamble or lengthy explanation. His language is not immediately clear, but richly suggestive and idiosyncratic.

What does Keats mean by ‘negative capability’?

Clearly, he is using the word ‘negative’ not in a pejorative sense, but to convey the idea that a person’s potential can be defined by what he or she does not possess – in this case a need to be clever, a determination to work everything out. Essential to literary achievement, Keats argues, is a certain passivity, a willingness to let what is mysterious or doubtful remain just that. His fellow poet Samuel Taylor Coleridge, he suggests, would do well to break off from his relentless search for knowledge, and instead contemplate something beautiful and true (‘a fine verisimilitude’) caught, as if by accident, from the most secret part (‘Penetralium’) of mystery. The experience and intuitive appreciation of the beautiful is, indeed, central to poetic talent, and renders irrelevant anything that is arrived at through reason. Keats ends his brief discussion of negative capability by concluding that ‘with a great poet the sense of Beauty overcomes every other consideration, or rather obliterates all consideration’.

Keats never repeated the phrase ‘negative capability’ in his letters. Like similar nuggets found throughout his correspondence, it is of the moment, prompted by a desire to share his latest thoughts with his friends; it is not part of an overarching intellectual structure. But it is prefigured in a slightly earlier letter, written to Benjamin Bailey on 22 November 1817, in which Keats observed that he was unable to see ‘how any thing can be known for truth by consequitive [sic] reasoning … can it be that even the greatest Philosopher ever arrived at his goal without putting aside numerous objections – However it may be, O for a Life of Sensations rather than of Thoughts!’.[2]

And Keats touched again on the idea of the passivity, humility even, of a great writer, in a letter he wrote to his friend Richard Woodhouse on 27 October following year. The ‘poetical Character’, he maintained,

is not itself – it has no self – it is everything and nothing – It has no character – it enjoys light and shade; it lives in gusto, be it foul or fair, high or low, rich or poor, mean or elevated – It has as much delight in an Iago [the villain of Shakespeare’s Othello] as an Imogen [Shakespeare’s heroine in Cymbeline]. What shocks the virtuous philosopher delights the camelion Poet.[3]

The word ‘gusto’ was used by Keats’s contemporary, the essayist and critic William Hazlitt, to describe the power and passion with which an artist creates another form. ‘The infinite quantity of dramatic invention in Shakespeare takes from his gusto’, Hazlitt wrote in the Examiner on 26 May 1816; ‘The power he delights to show is not intense, but discursive. He never insists on any thing as much as he might, except a quibble.’

Keats, who knew Hazlitt and was influenced by his writing, developed this idea. He found an ‘indescribable gusto’ in the voice of his favourite actor, Edmund Kean, who completely inhabited the parts he played. Great poets, argued Keats, had gusto because they were not impeded in their work by an identity of their own, with personal opinions that might affect the independence and freedom of the characters they create: a poet, he told Woodhouse, ‘has no Identity – he is continually informing and filling some other Body’.[4]

Keats recognised the chameleon aspect of his own nature. He would watch sparrows from his window and pick about with them in the gravel. He would imagine the delight a billiard ball might take in its own roundness, in its smooth, rapid motion. More dramatically, he told Woodhouse how, in a room full of people, he would quickly be ‘annihilated’ by the different identities pressing upon him. But that was the nature of poets, of the men of genius Keats habitually measured himself against. He told his friend Benjamin Bailey on 27 November 1817:

In passing however I must say one thing that has pressed upon me lately and increased my Humility and capability of submission, and that is this truth – Men of Genius are great as certain ethereal Chemicals operating on the Mass of neutral intellect – but they have not any individuality, any determined Character.[5]

First among these men of genius, for Keats, was Shakespeare, who possessed negative capability ‘so enormously’. When he was beginning his first long poem, Endymion, on the Isle of Wight in 1817, Keats imagined Shakespeare as the genius presiding over him. The thoughts on literature which he shared in his letters are always deeply interesting, but their power also comes from their urgency, an urgency derived from the single-minded dedication with which Keats pursued his ambition to become a great poet.


* Stephen Hebron is a curator at the Bodleian Library, Oxford University. He has published widely in the field of British Romanticism, including most recently John Keats – A Poet and His Manuscripts (2009) and Shelley’s Ghost (2010).

John Keats' 'Ode to a Nightingale'

​Keats believed in the concept of ‘Negative capability’. By this he meant an ideal of open-mindedness, of ‘let[ting] the mind be a thoroughfare for all thoughts’. He did not want his mind to ‘irritabl[y] reach[ing] after fact and reason’, ‘hungering… after truth’, or ‘always trying at it’. (Letters, II, 213; I, 193, 185).

We should be able, especially if we are poets, to be ‘capable of being in uncertainties, Mysterie, doubts’ and of ‘remaining content with half knowledge’ (Letters, I, 193-4).

It is this idea of ‘half knowledge’, or indeterminacy’ that I would like to inform my commentary on the ode.

In the fourth stanza, the speaker invites the nightingale to fly away - and he will follow. This will not be facilitated by wine (‘Not charioted by Bacchus and his pards’ (‘leopards’)), but by poetry. He sets up an opposition between the ‘viewless (i.e. invisible’) wings of Poesy’ and the ‘dull brain’ which ‘perplexes and retards’.
.
Open Horizons