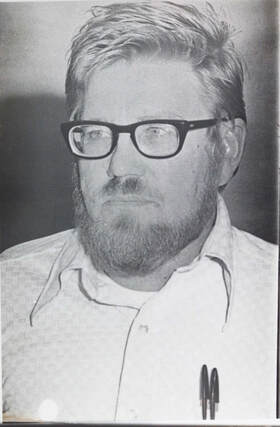 ​Dr. Arthur Albin Johnson, 95, of Conway, passed away on Sunday, October 4. A long-time professor at Hendrix College, Arthur was much respected in the community and beloved by his family.

Arthur was born on February 24, 1925, in Chicago, IL, to Claus Martin Johnson and Esther Marie Youngberg Johnson. A son of Swedish immigrants, he was proud of his Swedish heritage. When he was still a baby, the family moved to a farm in Willow River, MN, and then four years later to Minneapolis, MN, where Arthur remained through high school. Arthur was five when his father passed away. Shortly thereafter, his grandmother (Lotta Larsdotter Youngberg) moved in to help his mother run the household and raise the children. Arthur spoke fondly of his grandmother and what a difference she made in his life and upbringing.

In January 1943, at age 17, Arthur graduated from high school. One month later he turned 18 and registered for the draft. On July 5 that same year he was drafted into the U.S. Army. His tour of duty as part of the 1st Infantry Division took him to England, France, Germany, and Belgium. After his discharge, he used the GI Bill to enroll at North Central College in Naperville, IL. In the second week of classes, he met a coed, Martha Himmel, when she dropped a book in the library, and he stooped to pick it up for her. Before long, the two were inseparable. After his junior year, Arthur transferred to the University of Minnesota to be nearer to Martha, who was working on her Master’s degree at the University of Wisconsin. Upon graduation from the University of Minnesota with a degree in chemistry, Arthur was accepted as a graduate student in the zoology department at the University of Illinois. Arthur and Martha were wed on Sept. 1, 1951.

While Arthur was finishing his doctorate in 1955, the University of Illinois received a phone call from Dr. Matt Ellis, then president of Hendrix College in Conway, Arkansas. Dr. Ellis inquired if there were any Ph.D. candidates in biology who were nearing completion of their degrees. The university gave them Arthur’s name, and he soon received a call asking him to come to Arkansas for an interview. He made the trip by passenger train and was put up in the Bachelor Hotel, the only hotel in Conway at the time. At the end of the overnight visit, Dr. Ellis extended a job offer. That summer, Arthur and Martha - who were expecting their first child - made the move from Illinois to Arkansas where they would raise their family and remain for the rest of their lives.

Arthur taught in the biology department at Hendrix from 1955 to 1990. He served as chairman of the department for a period of time and advised hundreds of students, many of whom were premed. A devoted teacher, he mentored students, advised them and taught them how exciting it was to learn. In 1980, he was named the Harold and Lucy Cabe Distinguished Professor of Biology at Hendrix. After retirement, he kept in contact with biology alumni, taking great pride in their achievements and contributions to education, science, and medicine. Art and Martha also found a second home at the University of Minnesota Forestry and Biological Station at Lake Itasca, MN. Traveling there every summer, Arthur, assisted by Martha, continued his research on the diversity and ecology of parasitic nematode worms, discovering more than 25 species new to science.

Arthur and Martha had five children. He was a loving father and always encouraged learning and new experiences for his children. From taking up beekeeping in the backyard to raising quail in a back bedroom of the house, to capturing and banding blackbirds - life was never dull. The family of seven took many camping trips across the country, piling in one car and sleeping in one tent.

Arthur and Martha were instrumental in the founding of the Arkansas Audubon Society Halberg Ecology Camp, an annual summer camp for young people that features studies in various areas of natural history. They both took pride in the camp and its continued success. Arthur was also involved in his community. He and Martha were members of the Conway Human Relations Council, which in the 1960s supported the integration of the Conway Public Schools. Arthur served as a poll worker for many years and wrote hundreds of letters to elected officials about concerns of the day. Later in his life these letters focused primarily on the threats that gun violence and climate change both pose to the future of humanity and the planet.

The family wishes to extend its most sincere thanks to the staff of Ridgemere Senior Living, particularly the memory care unit, for their kind and outstanding care of Arthur, especially during the unpredictable coronavirus pandemic. In addition, the family is grateful to the Arkansas Hospice staff for their attentiveness and grace in the final days.

Burial arrangements have been entrusted to Larry G. Acklin Funeral Home of Conway. To view the online obituary or offer condolences, please visit http://www.larrygacklinfuneralhomes.com. There will be no public memorial service at this time. A small private graveside service for family will be held, with a public service to be scheduled for a later date. In lieu of flowers, contributions may be made to the AAS Halberg Ecology Camp, P.O. Box 242088, Little Rock, AR 72223 or to the Dr. Arthur A. and Martha Johnson Scholarship at Hendrix College, Office of Development, 1600 Washington Ave., Conway, AR 72032.