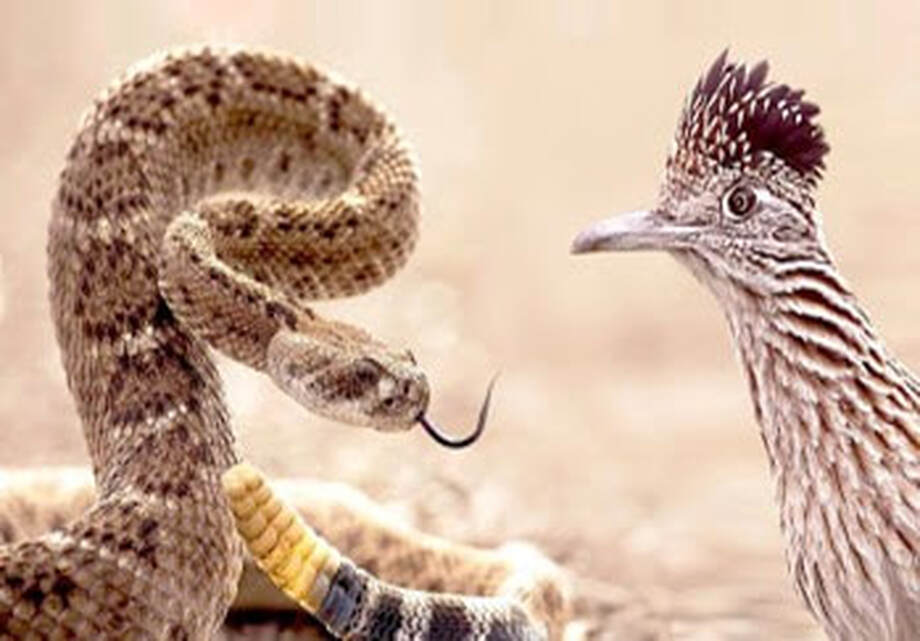 ​Dueling dances of death are not a rare sight in the Big Country of Texas.  Rattlesnakes are plentiful and roadrunners are common.  Roadrunners are some of my favorite birds.  These beautiful birds can run up to 24 miles per hour and can make short work of an attacking rattler.  I have seen this deadly dance in action.  The roadrunner is so agile and fast that it can maneuver in and out until it grabs the snake behind its head only to bash it into submission and death so that it becomes a tasty dinner.  By the same token, I have witnessed rattlers and rat snakes kill and eat entire smaller birds or rodents. It is incredible to watch how such a small mouth can open up to squeeze and swallow its prey.  How does that bulge ever get digested?

Which of these creatures is a beauty and which is a beast?  All have beauty and are connected in the natural and amazing order of creation. If we destroy the delicate balance of our ecosystem, there is a desperate price to pay.

In the creation story from the Hebrew scriptures in Genesis, God says, "Let us make humankind in our image, according to our likeness; and let them have dominion over the fish of the sea, and over the birds of the air, and over the cattle, and over all the wild animals of the earth, and over every creeping thing that creeps upon the earth......God saw everything he had made, and indeed, it was very good."

Ok.  So, if the creation story says that even the creepy crawly things are good, then there must be a certain kind of wisdom to it all. My only question about God's wisdom is putting humankind in charge of it all.  It seems to me the human tendency for power, greed, domination, selfishness, and control have demonstrated a detriment to the beautiful creation we are given.  But wait!  If we are created in God's image and likeness then perhaps, we have the innate capacity to care for all living creatures great and small with love and care.  Perhaps we have the ability to understand the connectedness of all creation and can develop the compassion to protect it and each other.  Just because we are created in God's image, doesn't mean we always honor it and live it out as a human race but we can if we choose to.  Life can be deeply honored if we live out of a love that emphasizes respect and care for all of life.  As Process Theology teaches, if we trust in beauty and a universe of inter-becoming, then we are open to fresh possibilities, delight in diversity, an offer a special care for the vulnerable.

I confess that I sometimes fall short of loving some of the creepy, crawly creatures.  Yes, I, along with the roadrunners, have dispatched a few rattlesnakes in my life.  When it comes to my safety or our puppy dog's life, the hoe wins and the rattler goes to meet its maker. I do my best to frighten them away and let nature BE.  I try to honor the fact that I am only sharing in their habitat and they do a lot of good. Most of the time I let them live another day to go about what they were created to do.

Beauty? Beast? Balance?  It is a journey. In it all, I hope I can seek to remain true to the image and likeness of my Creator whose best hope and invitation to me is to live with care, love, and respect with and for all.  May it be so! 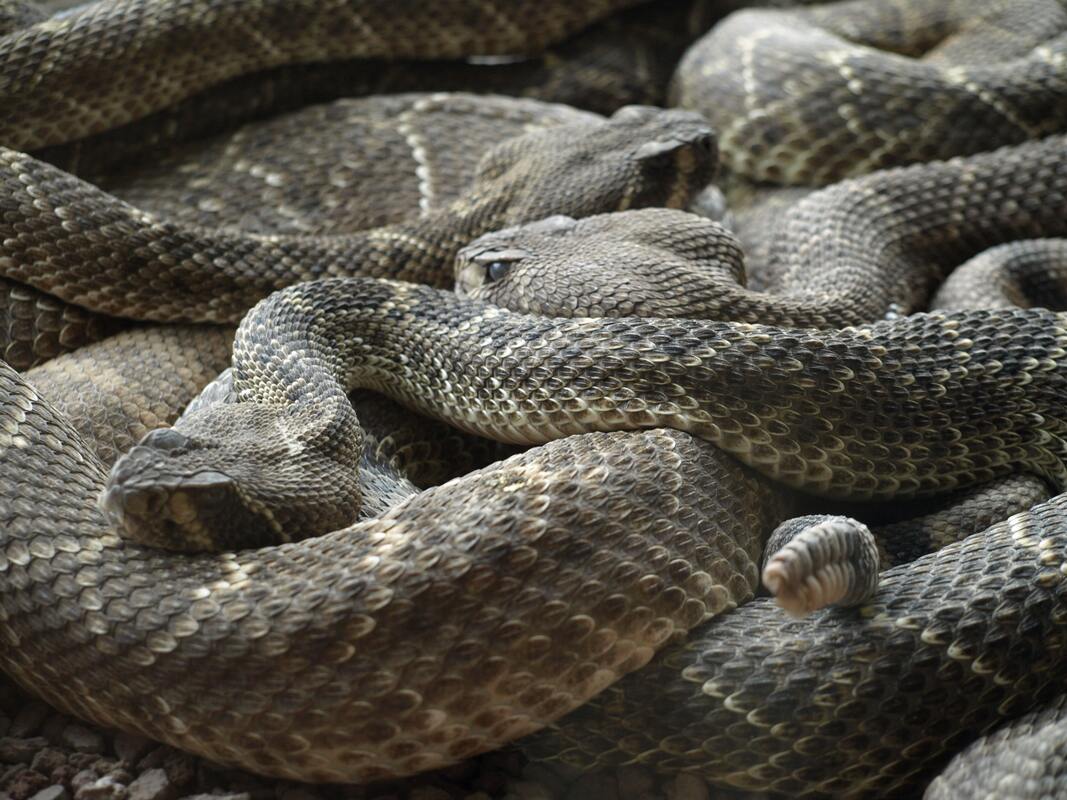 Photo by Fernando Santander on Unsplash

Are there Rattlesnakes in Heaven?​
​
Jay McDaniel
​

What happens when the rattlesnake, as Nita Gilger says, meets his maker?  Are there rattlesnakes in heaven?  And if there are, will they kill small birds and rodents?  Or will they be liberated from their predatorial instincts?  If liberated, would they still have their quickness, their vitality, their beauty?

​The founder of Methodism, John Wesley, offered a third answer: (3) there will be a general deliverance of all creatures in a life to come, and these creatures will be redeemed of what he called their "unruly passions" to eat other creatures, thus returning to the original state of paradise, in which there were no predator-prey relations.  In a sermon called the General Deliverance, he writes:
​

​ The whole brute creation will then, undoubtedly, be restored, not only to the vigour, strength, and swiftness which they had at their creation, but to a far higher degree of each than they ever enjoyed. They will be restored, not only to that measure of understanding which they had in paradise, but to a degree of it as much higher than that, as the understanding of an elephant is beyond that of a worm. And whatever affections they had in the garden of God, will be restored with vast increase; being exalted and refined in a manner which we ourselves are not now able to comprehend. The liberty they then had will be completely restored, and they will be free in all their motions. They will be delivered from all irregular appetites, from all unruly passions, from every disposition that is either evil in itself, or has any tendency to evil. No rage will be found in any creature, no fierceness, no cruelty, or thirst for blood. So far from it that “the wolf shall dwell with the lamb, the leopard shall lie down with the kid; the calf and the young lion together; and a little child shall lead them. The cow and the bear shall feed together; and the lion shall eat straw like the ox. They shall not hurt nor destroy in all my holy mountain.” (Isaiah 11:6, &c.)

For my part as a process theologian, I have always appreciated, but been troubled by, Wesley's suggestion.

Like other process theologians and philosophers. I am inspired by Whitehead's image of Tragic Beauty in Adventures of Ideas.  It is the idea that there is a supreme beauty in the universe, including and encompassing all things, which is, in Whitehead's words, a Harmony of Harmonies.  This Beauty is more than the world we ordinarily see; it is a Truth of feeling not discursive thought.  And, adds Whitehead, the Beauty that is felt includes tragedy as transformed.   For my part, I see predator-prey relations as part of the tragedy.  I know many a biologist who thinks that my view is human-centered, arrogant, and somehow missing the beauty of those relations.  But I can't help but imagine this beauty from the point of view of the individual creature, be that creature predator or prey.  As the fox chases the rabbit, or the rattlesnake the rodent, I want to imagine the universe from the point of view of each.  Does the rabbit find the process of being chased and eaten "beautiful"?  Is the rodent inspired by the idea of a "balance" in nature.  I think not.

Heaven: Two Ways to Think about It

Back, then, to the Beauty of which Whitehead speaks.  Some process theologians imagine this Supreme Beauty as something like heaven: a living receptacle for all the creatures in the world as they, or their experiences, come into being and pass away while on earth.  In this heavenly domain, say these theologians, all of the experiences of all creatures are felt for what they are and woven into an everlasting tapestry of memory.  It's not that the creatures themselves live on, but that their lives are remembered by the everlasting memory of God.  This is called objective immortality in the memory of God

Still other process theologians think that the creatures themselves undergo a continuing journey after death, such that they, as subjects of their own lives, live on in the very life of God, surrounded by divine love and lured into what is possible for them, relative to the conditions of their lives.  Even in heaven, on this view, creatures would continue to receive, and have the capacity to respond to, "initial aims" from God.  This is called subjective immortality in the life of God.

Of course most process theologians consider these two options -- objective immortality in God and subjective immortality in God -- primarily with reference to human beings.  This is natural.  But for those of us who love our pets, or who bond with other animals, we naturally ask about them, too,  Many people hope for a reunion with their dogs in heaven, and are not interested in a heaven that excludes them.   To them, so some process theologians, say: "Yes, there are dogs in heaven.  And cats, too.  And horses as well."

If we seek to live from love, and with a special concern for the vulnerable, how shall we think about this?  One way, true to many ecologists, is to see predator-prey encounters as part of nature's way and then to celebrate the beauty without any qualification.  "If you have the big picture," so this thinking goes, "you realize that the entire system of life competing with life is beautiful."  Some of what Nita says leans in this direction.

She confesses, however, that she also prioritizes a bit: "I confess that I sometimes fall short of loving some of the creepy, crawly creatures.  Yes, I, along with the roadrunners, have dispatched a few rattlesnakes in my life."  Indeed, like most of us, she chooses the life of her puppy dog over that of the rattler....When it comes to my safety or our puppy dog's life, the hoe wins and the rattler goes to meet its maker."

And yet she knows that the rattler, too, has aims to live that deserve respect: "I do my best to frighten them away and let nature BE.  I try to honor the fact that I am only sharing in their habitat and they do a lot of good. Most of the time I let them live another day to go about what they were created to do."

Holy Ignorance
​
I understand her ambivalence completely.  I, too, have a preference for puppy dogs and I, too, want all living beings to live another day, if they do not threaten me or those whom I love.  I can't avoid the hope that all will be well, and all manner of things well, in the heart of God.

Which means that I, too, live with tension.  After reading Nita's essay, I am left with the question: "Are there rattlesnakes and roadrunners in heaven, and do they get along?  Are their interests in surviving with satisfaction harmonized in heaven."  Wesley thought they did get along.  I do not know.  I simply know that, as a Christian, I hope that all living beings find what they are looking for: survival with satisfaction. As to how this hope gets realized, in heaven or on earth, I see through a glass very darkly.
Open Horizons