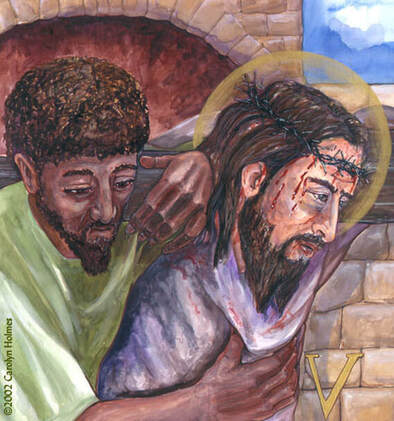 By Carolyn Holmes, used under Fair Use

Simon The Cyrenian Speaks, by Countée Cullen
​
He never spoke a word to me,
And yet He called my name;
He never gave a sign to me,
And yet I knew and came.
At first I said, “I will not bear
His cross upon my back;
He only seeks to place it there
Because my skin is black.”

But He was dying for a dream,
And He was very meek,
And in His eyes there shone a gleam
Men journey far to seek.

It was Himself my pity bought;
I did for Christ alone
What all of Rome could not have wrought
With bruise of lash or stone.

I have read the story of Jesus’ passion – of his trial, suffering, and crucifixion – for years, just like many of you. But this year I found myself strangely drawn to Simon of Cyrene. Simon is spoken of in all three of the synoptic gospels – Matthew, Mark, and Luke. Simon was from the city of Cyrene in Northern Africa, in an area in what is now eastern Libya. Cyrene had a large Jewish population; approximately 100,000 Jews had been forced to relocate there by Greek rulers in the 4th century BCE. There was a synagogue in Jerusalem especially for Jews from Cyrene who made pilgrimages to Jerusalem for the annual Jewish festivals. We can assume that Simon was in Jerusalem for just such an occasion – the Passover.

Simon wasn’t actually looking to carry the cross for Jesus or anyone else that day. Matthew and Mark tell us that Simon was “compelled” to carry the cross, while Luke tells us that Simon was “seized” and the cross “laid on him.” Some have speculated that perhaps Simon showed sympathy to Jesus and for that reason was compelled to carry his cross, but the bible says nothing about that. Still, what happened to Simon that day – his carrying the cross for Jesus – has great significance for our own spiritual journeys. After all, earlier in the gospel of Mark Jesus tells his followers: “If any want to become my followers, let them deny themselves and take us their cross and follow me. For those who want to save their life will lose it, and those  who lose their life for me sake, and for the sake of the gospel, will save it” (Mark 8:34-35). Perhaps it isn’t coincidental that Luke actually specifies that Simon carried the cross behind Jesus – that Luke spells out the fact that Simon literally followed Jesus that day.

If Simon is the first to literally pick up the cross and follow Jesus, what can we learn about Christian discipleship from Simon’s act? Jesus had been beaten and flogged. We can imagine how physically exhausted and injured he must have been. Contrary to what many of us have been taught about God, it seems in this passage that Jesus really does need Simon to do something for him that he cannot do for himself.

We tend to think of our relationship with God as unidirectional – God helps us when we are suffering. In the story “Footprints” that was so popular twenty years ago, Jesus tells a believer who is looking back over his life: “There, where you see only one set of footprints in the sand, it is there that I carried you.” But if the story of Simon of Cyrene tells us anything, it’s that there are also times when the opposite is also true – times when Jesus needs our help,  times when we might be said to carry Jesus as well, times that bear witness to Teresa of Avila’s famous quote:

God depends upon us to do the work of the kingdom; this is one of the ways God empties Godself and becomes vulnerable in this world God has made. Whether it is carrying his cross or feeding the hungry, God works in the world through us.
​
And this brings us to another important facet of discipleship brought to light by Simon’s actions that day in Jerusalem. As disciples of Jesus, we are called to carry not only our own cross, but the crosses of others as well. One person who knows this call in his own life goes by the name “Caesar” to protect his identity. Caesar worked in Damascus for the Syrian regime as a photographer, documenting the government’s atrocities for its own records. Instead of just being thankful that he himself was not the victim of the government’s brutality, the scenes he documented were so horrifying that he could not not do something. The cross of so many Syrians became his own.

Caesar began saving photos to a thumb drive and smuggling them out of the country. The almost 55,000 photos reveal the torture and mutilation of prisoners, the starvation of thousands of men and women, and the inhumane use of chemical weapons on Assad’s own people. Caesar risked his life over and over again to get photos of these atrocities outside Syria, so that sanctions might be imposed on the Assad regime by other governments throughout the world. Now that Caesar and his family have themselves been smuggled out of Syria, he travels the world speaking of the brutality suffered by Syrians who remain. I believe that in carrying the cross of those Syrians abused and dehumanized by Isis and Assad’s regime, Caesar was – like Simon of Cyrene – carrying the cross of Jesus himself.

I have often looked at Palm Sunday as a day begun in triumph, as Jesus enters Jerusalem, and ending in utter despair, with Jesus hanging on the cross. The day has always had a downward trajectory for me. But this year, as I pay closer attention to Simon of Cyrene, the trajectory seems somewhat different. Just as the empty tomb would bear witness to Jesus’ resurrection three days later, what happened to Simon that day would bring newness to his life in ways he never expected. This day forever changed Simon’s life and perhaps the life of the early Church. The city of Cyrene went on to become an early stronghold of Christianity, possibly because of Simon’s ties there. One church tradition holds that Simon was later consecrated as the first bishop in what is now known as the archdiocese of Avignon in France. He is also said to have been crucified in 100 CE, becoming a martyr in the Church. According to tradition, his sons Rufus and Alexander became missionaries in the early Church.

In the coming days of Holy Week, we will walk the way of the cross with Jesus, and hopefully our imaginations will be sparked by Simon of Cyrene. No matter how much our culture may tell us otherwise, no cross belongs to or affects just one individual. Whether we recognize it or not, we are all carrying one another’s crosses, and we all carry the cross of Jesus. When we pick of these crosses with love and compassion, we become followers of Christ.

And so let these questions confront us this Palm Sunday: Whose crosses are we called to intentionally pick up and carry? Do we sense that to do so is to carry the cross of Christ himself? And can we trust that that the way of the cross is the path to resurrection itself?
Open Horizons