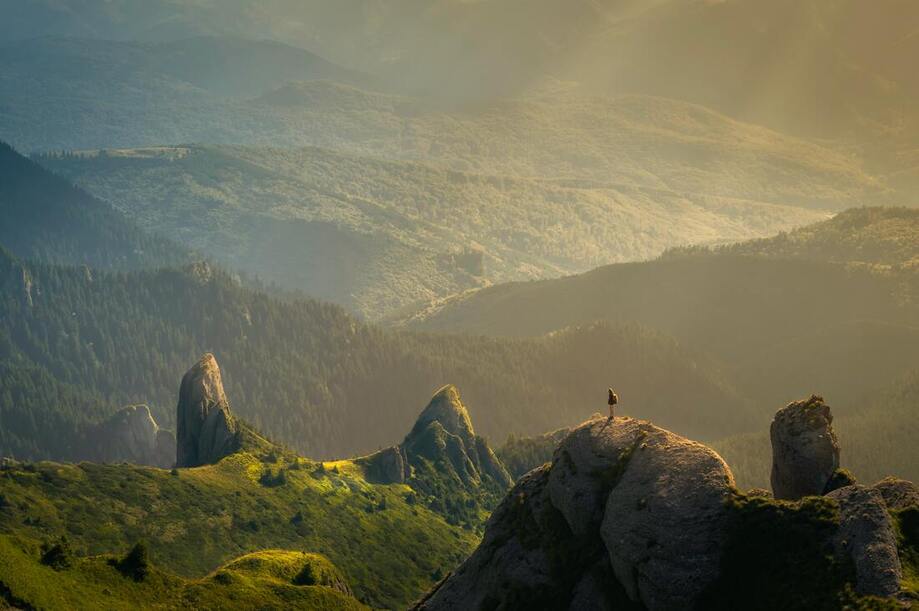 ​
The World is Too Much With Us

The world is too much with us; late and soon,
Getting and spending, we lay waste our powers;--
Little we see in Nature that is ours;
We have given our hearts away, a sordid boon!
This Sea that bares her bosom to the moon;
The winds that will be howling at all hours,
And are up-gathered now like sleeping flowers;
For this, for everything, we are out of tune;
It moves us not. Great God! I’d rather be
A Pagan suckled in a creed outworn;
So might I, standing on this pleasant lea,
Have glimpses that would make me less forlorn;
Have sight of Proteus rising from the sea;
Or hear old Triton blow his wreathèd horn.

The Living Earth Movement
​
​What is the "world" that is too much for us? In Wordsworth's poem it is not the natural world or the Earth community. It is not the hills and rivers, trees and stars. It is the world of industrial civilization: the world of compulsive getting and spending, of being out of tune with the more than human world.

For us today, the world of getting spending is still with us, albeit called post-industrial civilization. It is the world of consumer culture, exploitative capitalism, compulsive busyness, and powerful nations that are not willing to make any sacrifice for the sake of a greater good.

It is indeed too much for us humans, wreaking havoc on our social and spiritual lives, and it is also too much for other members of the Earth community. Witness the rates of species extinction, topsoil erosion, climate change.

We can well understand a desire to recover and reclaim the spirit of paganism: that broad cultural movement, found throughout the world, which knows that the Earth itself is alive with vitality and value. Pagans follow polytheistic, earth-centered religions. You can learn more about their historic roots at the Harvard Pluralism Project website; click here.

With its references to pagan gods, Triton and Proteus, Wordsworth's poem expresses a longing for paganism, and many in the contemporary world have a similar longing.  Thomas Moore writes:
​

​"My prayer at that moment was for an ecumenical spirit not much discussed: a reconciliation of differing life philosophies and not just churches, of religions great and small, and a renewed appreciation for neglected and despised paganism. I don't expect to see this ecumenical wish understood or fulfilled in my lifetime, but I have some hope for the future of the soul's natural religion."

​To be sure, Moore's prayer is being answered today by the many people in the world who identify as pagans. It is difficult to know the numbers; it is a grassroots movement. A study in the United States estimates the number in that country as several million.

The well-known eco-philosopher, Thomas Berry, is famous for saying one of the best things that could happen today is for people all over the world to put their sacred texts in the closet for, say, 300 years and learn again to feel the vital presence of the living Earth and live in healthy, reciprocal relationship with the more-than-human world. Wordsworth for his part, and those of us in the Living Earth movement for our part, sense the wisdom in Berry’s approach. There is a powerful need today to recover our pagan roots: to see Proteus rising from the sea and hear old Triton blow his horn.

This recovery does not require a relinquishment of wisdom from the axial-age religions. For example, John Cobb makes a powerful argument that the way of Jesus, when freed from its colonizing impulses, offers a way of moving beyond economism to Earthism. Similar arguments can be made for Judaism, Islam, Buddhism, Daoism, Hinduism, and others. None of the axial religions are entirely sufficient to our need today to live lightly on the earth and gently with one another, But all can help.

​Wordsworth reminds us that this "help" can come only if we recognize how alienated we are from the natural world and how important to move past our "getting and spending" into something more humane and natural, and, who knows, perhaps more joyful,

Books, Websites and Blogs on Paganism

a small sample from Patheos
​

Animism: Respecting the Living World — A companion website to the book of the same name by Graham Harvey.
The Alliance for Wild Ethics — Resources on cultural ecology, philosophy, and animism from David Abram and associates.

PaganTheology.com — This page, which primarily hosts the writings of a UU-identified Pagan named Porphyry, unfortunately seems to be inactive. Nevertheless, there are some useful introductory essays here (recommended starting point: the misleadingly-titled “Theology Is for Christians“), and more recent work by the same author can be found at PaganPages.org.

​Of course he [Wordsworth] recognises, what no one doubts, that in some sense living things are different from lifeless things. But that is not his main point. It is the brooding presence of the hills which haunts him. His theme is nature in solido, that is to say, he dwells on that mysterious presence of surrounding things, which imposes itself on any separate element that we set up as an individual for its own sake. He always grasps the whole of nature as involved in the tonal­ity of the particular instance. That is why he laughs with the daffo­dils, and finds in the primrose thoughts ‘too deep for tears.’

Some say process philosophy is already pagan. Others say that they belong to two different cultural worlds. I don't know, and I think it's best if pagans speak for themselves. Here's what I do know:


Ideas such as these are important and obvious to pagans, whose rituals embody them in practical, earth-friendly ways.

Process theologians have a social vision, and many pagans do as well. Both are committed to a way of living in the world that is creative, compassionate, inclusive, participatory, humane to animals, and good for the earth, with no one left behind. Process theologians speak of communities embodying these traits as eco-communities and see such communities as the building blocks of an earth-sensitive form of civilization: an Ecological Civilization. Here, too, there are many resonances with paganism.

With these affinities, it is easy to imagine Pagan Process Theology, and there are already examples of this in several works: for example, Carol Christ's She Who Changes: Reimagining the Divine in the World. The She in her title is in reference to a process understanding of God. In process theology God is not a king on a throne or a ruler in the sky but more like a womb-like compassion in whose consciousness the universe unfolds. She is understood in many ways: an eternal companion, a spirit of creative transformation, a lure toward novelty, a timeless mind in whom possibilities dwell, and the universe itself, including the Earth, as interwoven with love. Pagans will intuitively connect with some of these, perhaps recognizing many gods and goddesses as faces (energetic expressions) of She who changes.

And yet many pagans may be quite resistant to any talk of a Pagan Process Theology or, especially, a Christo-Paganism. They see historical Christianity as a cancer on the planet, inherently bent upon imposing imperial rule, and harming many many people in the process. And they hear in the very word "God" a sanctioning of this imperialism. (See the essay on Pagan Theology: The Christians and the Pagans, for more on this.)

There is no need for pagans to embrace a process outlook. There is room on our planet for a multiplicity of traditions, and they do not need to absorb one another.  There is beauty in the differences. Christians (and I am among them) need to humbly accept a place in a larger potpourri of cultures, faiths, and traditions, with pagans as companions in the journey. The process-influenced multi-faith organization, Process and Faith, already includes paganism as among the lineages to be heard and learned from. There are, however, many reasons why process theologians (Jewish, Christian, Muslim, Buddhist, Hindu, Unitarian, Native American or Pagan) can learn from paganism, especially as paganism incarnates the six ideas above. Paganism brings big ideas such as these down to earth and into rituals. It is a ritualism of what some process thinkers call Earthism.

Wordsworth is right: the world of "getting and spending" is too much for us. Pagans can help all of us gain freedom from that world, reconnect with the Earth, and find our way into a more sustainable and loving future, before it's too late.

Links for Whitehead and Wordsworth

​Homesick: A Plea for Our Planet