Pope Francis reminds us of the dignity of each and every person.  Every person deserves respect and care, quite apart from questions of "merit."  Roland Faber reminds us of the countless expressions of this dignity in our world.   This is part of what he means by polyphilia.  No two persons are exactly alike; differences are as important and beautiful as similarities.  New Orleans jazz presents aspects of this dignity in its splendid display of various people making music together, each different, making it up as they go.  The gospel-jazz musician PJ Morton calls it gumbo unplugged.  Faber further invites us to imagine the divine reality as leaving its traces in this multiplicity, but also subtracting itself from the multiplicity, so what we might appreciate the gumbo on its own terms and for its own sake.  One thing is clear.  There can be no ecological civilization, no compassionate community, without gumbo unplugged. 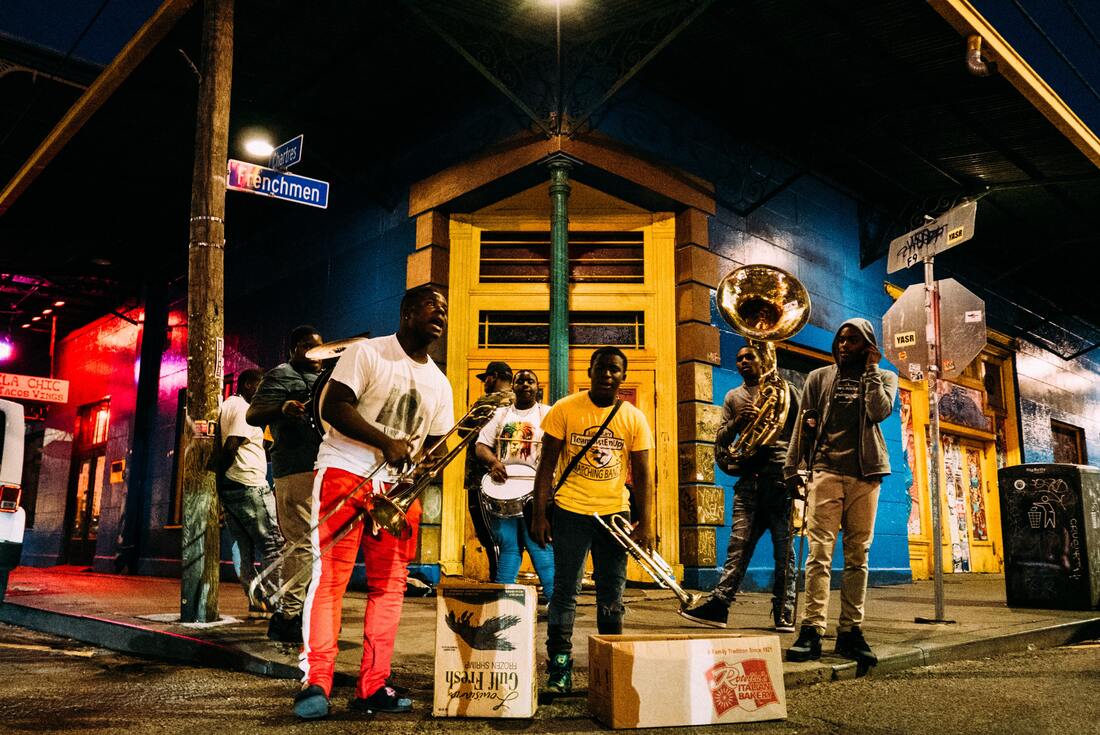 ​"God symbolizes the mystery of their dignity."

At the end of Adventures of Ideas, exploring the profoundly de/constructive implications of the “principle of limitation,” Whitehead’s divine explodes into a polyphilic multiplicity of open concepts in mutual suspension—Supreme Adventure, initial Eros, final Fact, Harmonies of Harmonies, Adventure of the Universe as One, the union of Zest with Peace, final Beauty, tragic Beauty, the Great Fact (AI, 295–96)—where theopoetics becomes both multiple and experimental at the same time.1 As the divine is diffused into the process of the becoming-manifold in such multiple and experimental ways, so does its “poetics” become this multiple and experiential diffusion. The spacing (mapping) of the traces (poietics) of this multiple divine (theios) is the task of theopoetics. The “traces” it leaves sensed in polyphilia; the “map” unfolded as divine comedìa; its expressions steeped in irreducibly many poetics—is theoplicity, “demonstrated” by mapping the symbolic traces of disappearance, “played” on the enfolded exclusion or subtraction. This is the concept of “polypoetics” of the poiesis of the divine in multiplicity.

​Polypoetics in this sense is, however, not a theoretical construct to satisfy metaphysical “games,” but a serious instrument of analysis of our world of power and its “games” of oppression. Polypoetics is a de/construction of such games of power in terms of the comedìa divina, its revolt against a dualism (AI, 190) that, in its many forms, guides or justifies religious, social, cultural, and political violence. The “constructive” mechanism of power either omits the divine in multiplicity (for the free game of power) or controls it with the One, the Two, and the Many (as justification of power). Instead of the oppressive implications of these two alternatives of reduction, abstraction, and legislation, polyphilic polypoetics radically articulates the infinite foldings of becoming for which “God” symbolizes the mystery of their dignity.

​- Roland Faber, "Polypoetics," in Depths as Yet Unspoken: Whiteheadian Excursions in Mysticism, Multiplicity and Divinity

​The human side of Ecological Civilization is gumbo unplugged.  People find their voices and are affirmed in their uniqueness while enjoying a chorus of multiplicity.  They are mutually transcendent and mutually immanent at the same time.

If you have a sense of this multiplicity, a taste for it, you find yourself impatient with metaphysical games that might reduce the world to One or Two or even Many, when such terms become tools for oppression and violence.  Instead you are drawn to a spirit of what Faber calls polyphilia.

Polyphilia includes a receptiveness to multiplicity itself and an intuitive recognition of the mysterious dignity of each and every person.  Polyphilia deconstructs ideologies and replaces them, not with another construct which smothers the multiplicity, but with a disposition, an attitude toward life, that is hospitable and convivial in the deepest of senses.  It also includes a sense that each and all -- the hills and rivers, trees and stars, plants and animal, atoms and molecules -- are forever and always becoming in a "creative advance into novelty,"  They cannot be fixed by our our ideas and concepts into one thing.  There is always more to them: a moreness that can only be understood if he hold our own concepts lightly, with a relaxed grasp.

This "holding lightly" of our concepts is a dimension of what tmystical traditions call apophasis.  Faber interprets apopophasis in a unquely Whiteheadian way/.

...Whitehead’s reorientation of the apophatic makes all the difference. While for classical negative theology, apophasis categoreally or apodictically addressed the unknowability of the essence of the divine or ultimate reality, Whitehead situates the apophatic in the future of becoming, as the source of the novelty of the not yet.21 While the approach of negative theology was to name only what cannot be said about the divine, Whitehead’s nothingness of the future is filled with the infinite potentials for that which is not yet

​
​And where is God in all of this?  For those among us to sense God as one who calls and responds in some way, God plays the role of a band leader, evoking and cajoling, inspiring and provoking, calling forth their response and responding to their call.  No, God is not a literal band leader like PJ Morton in the video, but a spiritual bandleader, the Poet of the world, says Faber.

What is important is to recognize that this very Poet does not seek to control or master, but rather to evoke and inspire; to help people lift up their own voices, play their own instruments, join the ongoing gospel choir.  And it is also important, as Whitehead and Faber make eminently clear, that "God" is not the only name for this Poet.  We can imagine the Poet as a Harmony of Harmonies, the Eros of the Universe, the Final Fact, the Adventure of the Universe as One or, as John Coltrane might recommend, the Love Supreme.  Just as words like "one" and "two" and "many" can be used as tools for violence, so can the word "God."  At some level we best unsay God even as we say God, lest God become our own tool for suffocating the world or remaking it in our own image.

In the video above PJ Morton does not disappear; he stays in the limelight most of the time.  But in the real world, the Poet of the world does disappear in countlessways, leaving only traces.  In the language of Faber, the divine reality subtracts itself from the multiplicity, not only for its own sake, but for the sake of the multiplicity itself, so that we can see it sparkle on its own terms, for its own sake, in its beauty.  This subtraction is part of divine love.  It is an invitation for us to welcome others in a spirit of conviviality and not so focus on the divine that we neglect the sheer dignitiy of this person, this tree, this frog, this tree, this life.  We honor God by not talking about God so much.  And, if we are accustomed to speaking too much, we honor the world by not talking about ourselves so much.  By listening and responding in love.   We subtract ourselves, too, so that others can affirm themselves, leaving a trace of our listening.  In this self-subtraction among the elite, polyphilia finds its joy.  It is gospel music re-invented, neither secular nor sacred in traditional ways, and for that reason ever so holy.