​He Who Saw the Deep

The Epic of Gilgamesh is about many things: "love between men, loss and grief, the confrontation with death; the destruction of nature; insomnia and restlessness, finding peace in one’s community, the voice of women, the folly of gods, heroes, and monsters—and more...It continues to speak to us in many ways." Thus writes Sophus Helle in the introduction to his translation of Gilgamesh. Click here.

The purpose of this page is to offer resources to the Open Horizons community for "opening our horizons" to the Mesopotamian world and the Epic of Gilgamesh. In the epic we meet a self-centered hero who becomes, in his way, a philosopher by the end of the epic. He realizes that he can find peace of mind only by abandoning his existential self-absorption, which includes a quest for personal immortality, and identifying with a wider family. In his context that wider family is the city to which he belongs and its people. In our context it is our local community and family, and perhaps also our city and nation; but it is also the web of life on Earth. The idea of identifying with the web of life is also part of Gilgamesh's journey. At one stage he destroys a forest teeming with life and is punished by the gods. We, too, are destroying our forests.

Still, there is the personal side of Gilgamesh's life, and part of the pleasure of the epic is to identify with it. He knows what it is like to love another man, perhaps sexually, and to have that friend die. We, too, know this experience of loss, whether homosexual or heterosexual. We, too, wonder about the mystery of death.

And, as is expected, Gilgamesh fights monsters, as do we all. They can be outside us or inside us: part of our madness of other and part of our own madness. In short, the Epic of Gilgamesh is among us. In Whiteheadian language, it is part of the many that become one, mythically if not literally. Time to claim our inner Mesopotamia. Claim our inner Gilgamesh. Enjoy. 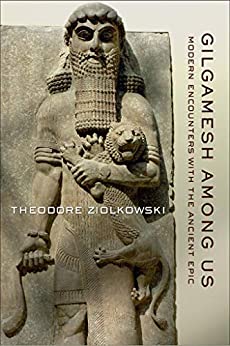 Podcast from BBC's In Our Time
on The Epic of Gilgamesh
​

"He who saw the Deep" are the first words of the standard version of The Epic of Gilgamesh, the subject of this discussion between Melvyn Bragg and his guests.

Gilgamesh is often said to be the oldest surviving great work of literature, with origins in the third millennium BC, and it passed through thousands of years on cuneiform tablets. Unlike epics of Greece and Rome, the intact story of Gilgamesh became lost to later generations until tablets were discovered by Hormuzd Rassam in 1853 near Mosul and later translated. Since then, many more tablets have been found and much of the text has been reassembled to convey the story of Gilgamesh, king of Uruk the sheepfold, and Enkidu who the gods created to stop Gilgamesh oppressing his people. Together they fight Humbaba, monstrous guardian of the Cedar Forest, and kill the Bull of Heaven, for which the gods make Enkidu mortally ill. Gilgamesh goes on a long journey as he tries unsuccessfully to learn how to live forever, learning about the Great Deluge on the way, but his remarkable building works guarantee that his fame will last long after his death.


Andrew George, Professor of Babylonian at SOAS, University of London;

​Frances Reynolds, Shillito Fellow in Assyriology at the Oriental Institute, University of Oxford and Fellow of St Benet's Hall;

Martin Worthington, Lecturer in Assyriology at the University of Cambridge. Producer: Simon Tillotson.

​David Damrosch, The Buried Book: The Loss and Rediscovery of the Great Epic of Gilgamesh (Holt, 2007)

Irving Finkel, The Ark before Noah: Decoding the Story of the Flood (Hodder & Stoughton, 2014) 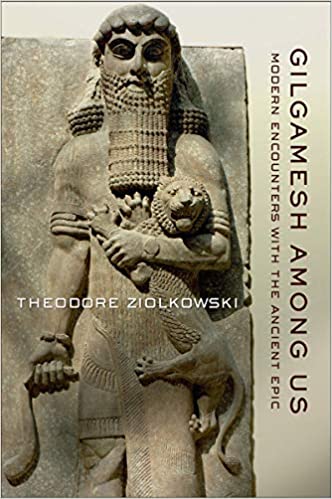 "The world's oldest work of literature, the Epic of Gilgamesh recounts the adventures of the semimythical Sumerian king of Uruk and his ultimately futile quest for immortality after the death of his friend and companion, Enkidu, a wildman sent by the gods. Gilgamesh was deified by the Sumerians around 2500 BCE, and his tale as we know it today was codified in cuneiform tablets around 1750 BCE and continued to influence ancient cultures―whether in specific incidents like a world-consuming flood or in its quest structure―into Roman times. The epic was, however, largely forgotten, until the cuneiform tablets were rediscovered in 1872 in the British Museum's collection of recently unearthed Mesopotamian artifacts. In the decades that followed its translation into modern languages, the Epic of Gilgamesh has become a point of reference throughout Western culture.

In Gilgamesh among Us, Theodore Ziolkowski explores the surprising legacy of the poem and its hero, as well as the epic’s continuing influence in modern letters and arts. This influence extends from Carl Gustav Jung and Rainer Maria Rilke's early embrace of the epic's significance―"Gilgamesh is tremendous!" Rilke wrote to his publisher's wife after reading it―to its appropriation since World War II in contexts as disparate as operas and paintings, the poetry of Charles Olson and Louis Zukofsky, novels by John Gardner and Philip Roth, and episodes of Star Trek: The Next Generation and Xena: Warrior Princess.

Ziolkowski sees fascination with Gilgamesh as a reflection of eternal spiritual values―love, friendship, courage, and the fear and acceptance of death. Noted writers, musicians, and artists from Sweden to Spain, from the United States to Australia, have adapted the story in ways that meet the social and artistic trends of the times. The spirit of this capacious hero has absorbed the losses felt in the immediate postwar period and been infused with the excitement and optimism of movements for gay rights, feminism, and environmental consciousness. Gilgamesh is at once a seismograph of shifts in Western history and culture and a testament to the verities and values of the ancient epic."

The Babylonian Mind:
The British Museum

Unearthed from the ruins of ancient cities in modern-day Iraq, the reconstruction of the epic from fragments of clay tablets has been a labour of love for scholars of ancient Mesopotamia. This painstaking work has brought to life a sophisticated story of adventure, heroism and friendship, as well as a reflection on the human condition.

Today experts are uncovering additional fragments of cuneiform script, and using artificial intelligence to decipher the text and fill in the gaps of this and other stories. Professor Anmar Fadhil from the University of Baghdad tells the programme about the latest discoveries.
​
Bridget Kendall is joined by Andrew George, Emeritus Professor of Babylonian at SOAS at the University of London and author of an acclaimed English translation of the epic; Professor Enrique Jiménez is chair of Ancient Near Eastern Literature at Ludwig-Maximiliens University in Munich, Germany. He has published widely on Babylonian literature of the first millennium BC; and Dr Louise Pryke is Honorary Associate in the Department of Classics and Ancient History at the University of Sydney in Australia. She’s the author of Gilgamesh, a guide to the epic which was published in 2019.
Producer: Fiona Clampin for the BBC World Service

The Gilgamesh Epic
​ for Young People
​