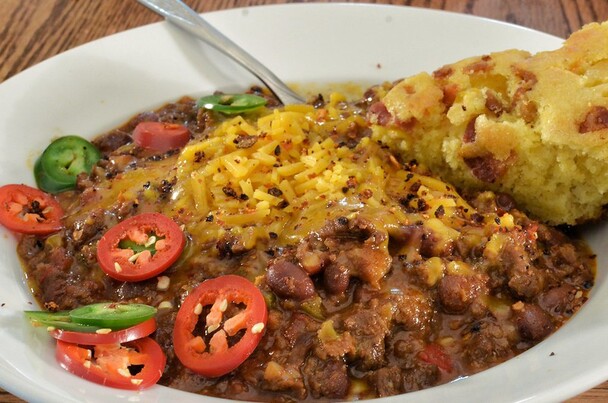 ​How I Got Over Being a
Radical Foodie Southern Health Nut

plus a Recipe for Dennis' Re-Sanctified Cornbread

​Her words hit me like a shock wave.  Wow.  Family traditions.  Cultural foods.  Feeling a heart connection to these foods and a longing.  Wow.  What are the cultural foods from my family?  My mom stopped cooking in 1982, said it was the best decision she ever made, so I grew up knowing diddly squat about how to combine ingredients much less feel a connection between the meal, the place, and the people.  Does Western Sizzlin’ count?  Red Lobster?   Holidays became our landmarks for creating special meals together at home.  I treasure these memories of rockfish, pecan pie, and my brother’s lentil soup.  My Brazilian dinner companion described a different world, shedding light on a curious culinary landscape.  It wasn’t just about food and sustenance.  Every meal was a celebration of her family and traditions, sharing in something special together each day, not just on special occasions.  I carried her words with me for a few more years, continuing on with my China outlook and not entirely sure of how to integrate her wisdom into my own place in the southern United States.  I wasn’t prepared to start eating fried chicken and hushpuppies, both iconic southern foods.   And, what good role models do us food-weary southerners have for ways of cooking?  Paula Dean?  I dare not tread down that road.

All of my well-crafted righteous ways of living came crashing to a halt the day my husband showed up in my life.  Dennis comes from a small town in eastern Arkansas, in the Mississippi delta.  His grandparents were sharecroppers.  Alongside the cotton and soybeans grew a vegetable garden that Dennis’ grandfather cast prayers over each season.   Dennis was raised on collard greens, pinto beans, black-eyed peas, and cornbread alongside sun-ripened peaches, sweet corn, and okra.  He knew the world of heirloom tomatoes before tomato-tasting festivals were hip, and he makes the best cornbread I have ever tasted.  One of the results of marrying him is that I’ve turned into a cornbread snob.  I admit it, even turning my nose up at restaurants claiming to serve Southern food.  You don’t add sugar and white flour to cornmeal.  You just don’t.  I now know what good cornbread tastes like.

My introverted self watches in amazement.  There must be a cooking gene, and he’s got it etched firmly in his genetic code.  When we moved in together, I wondered how my China Diet would fit with Dennis’ ways.  Should I insist on only local, organic, shade grown, non-processed, no sugar, no caffeine, fair trade, bird friendly, and so on?

As if God whispered directly in my ear, I heard the words, “Good Lord, girl, if you want your marriage to be good and have fun, you’ve gotta lighten up.”

“You gotta taste this,” Dennis says as he hands me a wooden spoon steaming with homemade gumbo.  It is perfection.  “The secret to good gumbo is a good roux,” he says, “It’s got to look like a dirty copper penny.”  As Dennis shells the Gulf Coast shrimp for the pot, he grins and exclaims, “I’m so good at this, I can’t stop!”  Lucky for me.

Once I tasted Dennis’ cornbread, I felt a pull in my body.  My heart traveled from China to a territory traced by delighting in cultural traditions my own family lost track of before I was born.  Traditions close to the land I call home.  Traditions rooted in generations farming dark loamy soil.  Of ceramic bowls holding succulent strawberries and sweet, raw onion on my tongue.  Of pickled peppers on beans and tomato gravy on biscuits.  The Chinese call it medicine.  Dennis’ family calls it good food.  While I still care about where my food comes from, I’m also learning the value of not fussing so much about how healthy I’m being, of savoring the incredible foods my southern river delta husband prepares.  I can’t imagine my world without his cooking.  There would be sadness in my heart.  It would hurt too much.
Open Horizons