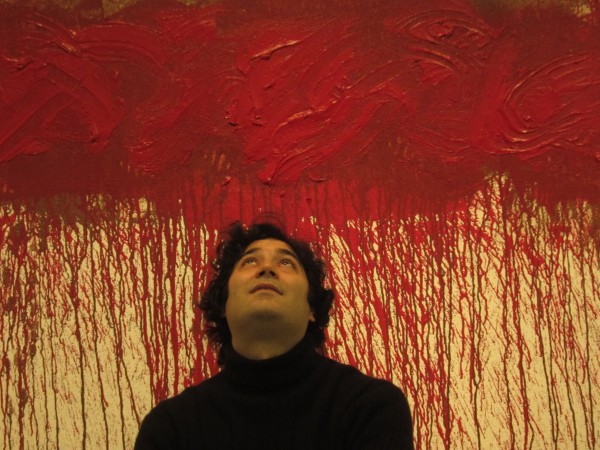 ​Idin Samimi Mofakham: @ MATA website: https://matafestival.org/about-mata/about-us/
​"Idin Samimi Mofakham, Iranian composer and musician, was born in 1982 in Tehran, Iran from one of the most famous Iranian artistic families. His late father, Kambiz Samimi Mofakham, a renowned and beloved children’s theatre and TV director, actor and puppeteer and his mother Hengameh Mofid, a famous children’s theatre dramatist and university professor, is from the most important Iranian artistic families.

Samimi Mofakham began music by learning classic guitar playing at the age 18 and later enrolled at the Tehran Conservatory where he received his B.A. in Classic Guitar; (2003-2005).

At the same time he founded his first music band “Migraine”, an experimental and underground music group, with his sister, Alma as vocalist and his two friends. They performed a few but highly successful underground performances in Tehran; but since there was no way to present the group through any authorized Iranian media, they stop performing for a while. Meanwhile the success of Migraine made them think more seriously about their music talents.

Idin enrolled master classes in Composition, Harmony, Counterpoint and Orchestration and continued his guitar playing with some of the best Iranian teachers at the same time.

Eventually he enrolled at Yerevan State Conservatory (Komitas Conservatory) in 2005 which he received his B.A. and M.A. in composition from the same conservatory in 2011 under the supervision of his teachers, especially Maestro Ashot Zohrabian;
Samimi Mofakham have received several awards and honors for his instrumental and vocal (choir and solo) pieces including Honorary Diploma from Composers Union of Armenia for Monologue for Violin solo, Armenian Young Composers Festival 2008, the First Prize at the Areon Flutes Competition for Pastorale for 3 flutes, International Chamber Music Competition 2009, California, USA; and also selected by CONVERGENCE, a foundation from Switzerland to take part in their master classes and workshops for young composers with Swiss composer Stefan Wirth which held in Georgia. In 2013 he is the Composer in Residence at Festival 4020, in Linz, Austria.

He is a permanent member of Iranian Society of Composers and tutor of Superior Music schools and colleges in Tehran. He is also a founding member of Composition and Music Theory Department at Music Department of University of Applied Science and Technology in Tehran, Iran."
​
Tags: Idin Samimi Mofakham
Open Horizons