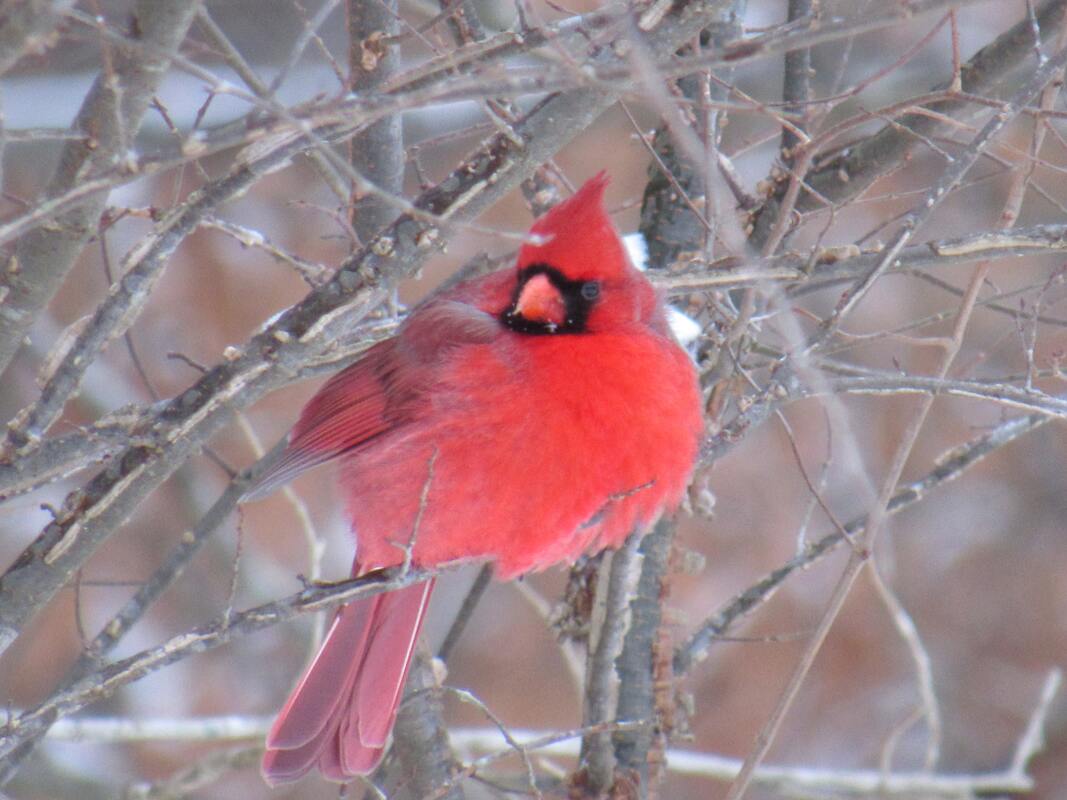 Cardinals Appear When Angels Are Near

Living in an Echanted Universe.
​

​On Christmas Eve I was sitting with my wife Kathy watching a service at St. John of the Divine Cathedral in New York online.  It was a festival of lessons and carols sung by member of the St. John's choir.  We were sitting by a window, thinking about some of the losses of loved ones and the hardships we had faced personally during the year, and of our expectations of the coming year.  The service was absolutely beautiful, and there was one point in it, when the soprano Susanna Phillips was singing O Holy Night, that I thought to myself: "The sheer beauty of this song, and her performance of it, transcends any suffering anyone might undergo."  I think beauty is a sign from God.

About the time the soprano was singing O Holy Night a cardinal alighted on the porch right outside our window and perched for a while.  Kathy shared with me the saying: "Cardinals appear when angels are near."  Kathy, who grew up in a science-oriented family that never really spoke of signs. is nevertheless quite sensitive to signs.  And while I grew up in a more religiously inclined family, my family, did not often talk of signs.  And yet things have changed for both of us: the universe seems more enchanted.  Filled with sadness, to be sure, but also with something magical and beautiful.  With serendipity.  We could not help but see the cardinal as an emissary from a deep and wide place, from God. Was it an angel? Was it one of our loved ones returning?  Was it God?  Of course, we know many people who see such happenings as mere coincidence.  But, like I said, we think differently. We believe that heaven and earth infuse one another and sometimes work together.

In the Christmas meditation below, Rev. Teri Daily (Episcopalian) does not appeal to cardinals as signs from God, although her open and relational outlook on life is open to that.  But I can't help but think of that cardinal and the beauty of O Holy Night as sung by the soprano when I Fread her sermon.  She writes: "There isn’t a place in this world that we or any part of creation are outside of God’s healing love. That’s the promise of the Incarnation."

In this simple sentence she summarizes an important part of open and relational theology.  It sees God's guiding love in the whole of creation.  From the perspective of process theology, this love may well coordinate its guiding impulses across people and even species, working through cardinals to guide and console humans and through humans to make space and provide habitat for other animals: cardinals, for example.  The promptings of God in human life, the lures of the Holy Spirit, to use process language, are in all creatures, not humans alone.

And yet, of course, they are in humans, too.  And some of those lures may well be directed, on God's part, toward revealing the whole purpose of life, which for the Christian is to love and be loved.  In this Christmas message she speaks of signs from God that come from other humans and, more specifically, from a baby lying in a manger.  She believes that, for Christians, this sign is “the promise to which all other signs – from the beginning of time – have been pointing. It is the truth which underlies the foundation of the world."  Its message is that there is a healing and whole-making energy in the world, and a divine life from whom that energy comes, that is more powerful than even the greatest suffering, a self-giving love that is perpetual and divine.  A love that is available to human beings all the time, that was incarnate in a baby lying in a manger, and let us add, in cardinals, too.

​
​Incarnation and Signs from God
​

Human beings need signs. We need confirmation that we are reading the universe correctly. Growing up, I spent most of my summers at my grandparents’ home in southern Georgia.  My grandmother was a good Methodist.  My grandfather was a Baptist, although I (like most of my family) didn’t find that out until it was written in his obituary.  See, the story goes that my grandparents had gotten into an argument – a fairly regular occurrence for them – and my grandfather found himself at a Baptist church service, a revival of sorts.  While he was there, a woman on his pew had a seizure and had to be taken by ambulance to the local hospital. We are not sure if it was the remorse he felt for the argument with my grandmother, or a sense of impending doom generated by the medical emergency next to him, or the work of the Holy Spirit – perhaps it was all three that prompted him to be baptized. But what sealed the deal for him was that he saw this woman’s seizure as a sign from God.

God’s people have always looked for and needed signs of God’s faithfulness – signs of God’s presence, signs that God has not forgotten God’s promises to God’s people, signs that we have not deceived ourselves, signs that what we believe we know about God and God’s dream for the world is, in fact, true. By the grace of God, we are given these signs over and over again.

In scripture, the rainbow becomes a sign of God’s promise to never again destroy the earth by a flood. Isaac’s birth to Abraham and Sarah in their old age is a sign that God has not forgotten the promise that they will have descendants as numerous as the stars in the sky. Jacob’s limp will be a perpetual reminder that he has met God face-to-face. Moses’ face shines when he comes down from Mount Sinai, a sign to the people that the law they are about to receive has come from no one other than God. Again and again God reveals Godself to Israel through acts of provision – a cloud to guide them by day and a fire by night, water that springs forth from rocks, and quail and manna to nourish them in the wilderness. All signs to the people that God has not abandoned them.

God also is not averse to using others to proclaim God’s faithfulness, guidance, and presence. Elijah defeats the prophets of Baal in a show of God’s power. Elijah throws his mantle on Elisha – a sign to Elisha that he is called by God to a prophetic life. As Jerusalem in besieged by the Babylonians, God tells Jeremiah to buy a field in Judah as a sign of God’s promise to Israel that, although she may find herself exiled, God will remain faithful to Israel and she will return someday to the promised land.

God continues to offer signs of promise even on this most holy of nights. An imperial census draws the pregnant Mary, along with her husband Joseph, to Bethlehem – the city of David, the family from whom the Messiah would come. Angels appear to nearby shepherds proclaiming the birth of a Savior and giving them a sign: “You will find a child wrapped in bands of cloth and lying in a manger.” The shepherds do find Mary, Joseph, and Jesus just as the angels had said; and then the shepherds themselves become a sign to Mary – confirming that what she had been told by the angel had really come to pass, that what she knew to be true in her heart was true also in reality.

This child lying in a manger is, for Christians, the promise to which all other signs – from the beginning of time – have been pointing. It is the truth which underlies the foundation of the world. The whole history of the world has been one cosmic story of God giving God’s self to us, of God’s desire for a relationship with us. God shared God’s goodness and love with us first through creation. Then God gave God’s self to us through a covenant with God’s people that was to be a light for all the nations, a way to draw all people to God. And now in the fullness of time, God gives God’s self to us in the form of a baby. In the Incarnation, God gives God’s very self in a bond more intimate than the world has ever known. God takes on human flesh and becomes one with us.

From this day forward, nothing will be the same. Because in the fulfillment of God’s promise in Christ we now find two more promises. First, in this baby born in first century Palestine we see our truest selves. We see that for which we were created – union with God. This night debunks the myth that divinity and humanity are separated by a chasm impossible to traverse; it debunks the myth that divinity and humanity are incompatible one with the other. God neither withdraws from us into a mansion in the sky nor overwhelms our humanity. Instead, humanity is created for communion with God.

Second, if God is willing to be found in a feeding trough, amid the stench and grime of a stable, surrounded by the sweat of travel and childbirth, the fear of being without shelter, oppression by foreign powers, and the stigma of broken societal norms and moral standards – if God can be born in these circumstances – then God can be born in all other places, too. God is born in the chaos of Syria as well as the calm of a fresh snowfall, in the hope of birth as well as the pain of death, in joyful celebrations as well as the loneliness of a pandemic, in a manger in Bethlehem and on a cross in Jerusalem. There isn’t a part of our humanity devoid of God’s presence. There isn’t a place in this world that we or any part of creation are outside of God’s healing love. That’s the promise of the Incarnation.

God didn’t give God’s self to us for a thirty-three-year period two thousand years ago; God gives us God’s self each and every minute of each and every day, in every part of our lives. Spirit and matter, God and creation, are absolutely compatible. It’s a two-fold mystery: the Word became flesh, and flesh was found capable of manifesting the Word. We see glimpses – signs – of this truth all around us. It is God’s promise fulfilling itself over and over again – weaving itself into the ongoing creation of the world for all to see, for all to treasure and ponder, for all to celebrate, for all to live, if only we (like the shepherds) dare venture into the world with hope and expectation.

​​
The Risk of Birth, Christmas, 1973
by Madeliene L’Engle
​
This is no time for a child to be born,
With the earth betrayed by war & hate
And a comet slashing the sky to warn
That time runs out & the sun burns late.

That was no time for a child to be born,
In a land in the crushing grip of Rome;
Honour & truth were trampled by scorn–
Yet here did the Saviour make his home.

When is the time for love to be born?
The inn is full on the planet earth,
And by a comet the sky is torn–
Yet Love still takes the risk of birth.
Open Horizons