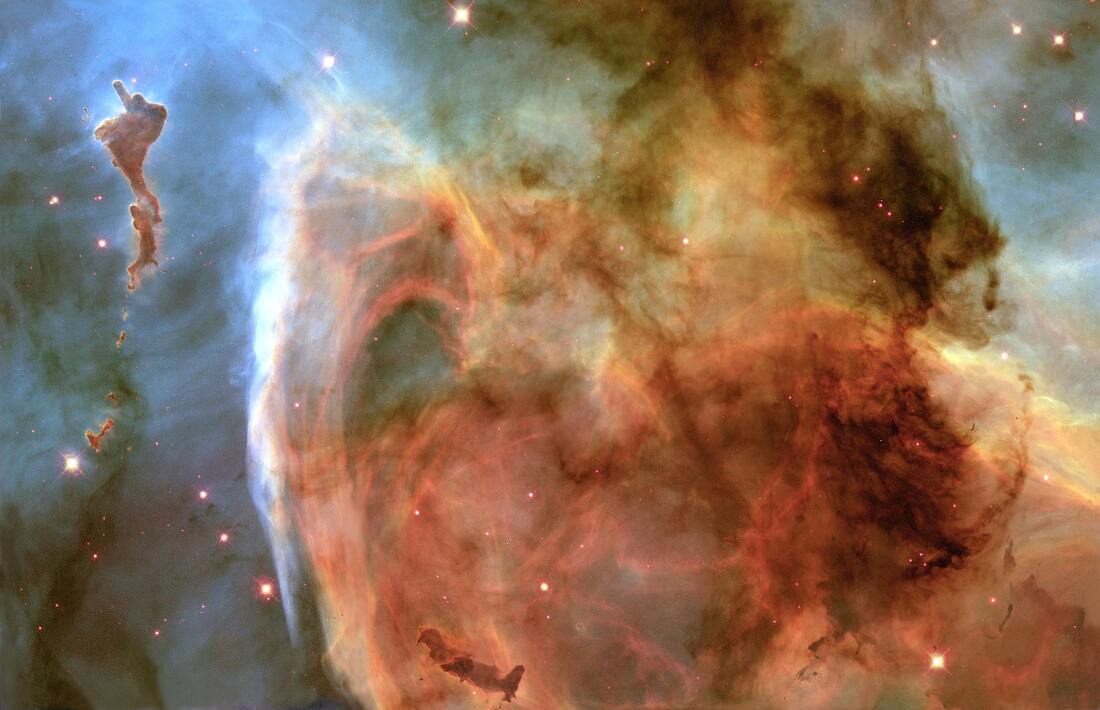 Photo by NASA on Unsplash

Metaphysic Inbred with mystic Ahead of Usain Bolt in windsprint With skill terrific How I'm gonna kick it Is somewhat different I split thoughts in the interim of act and and actual To cut a concept the blade cannot be factual Realm juggled within the Kemetic time machine swervin' Half a swing turnin' the pyramids into the urban Burning my feet with with the speed I escaped flying through the ozone With no poem When pen wave on the page, Death Star Destroyer blown The 100s wild underground kid came back to beats to play Shame you as I rearrange my sword all over your disarray To put in bluntly, you'll never touch me As I hold the mic in trance Take it out of context, counterattack your rap with a Celtic dance You heavy with what Smashin' a gas pedal Man settle Don't force me to that level Or get slashed with glass metal Sharp plastic, stay mellow Or sing falseto hello to a goodbye Said you was dope, that's a lie Thanks for the try, now permanent slumber under the sky No wonder third eye saw the fall of Babylon before the Vatican Open the scrolls of the Priory and found the bloodline was inside of me The return of the righteous side of me Roaring mightily clashing with has-beens and contemporaries Smash legions of domes, and sell bones to cemetaries I wore Templar crosses and waged wars against Islamic forces Nowadays I piss on the cross and sunburn 11 pale horses

Vs 2
​
Tearin' your pen pad Slappin' similies sin bad Hatchets mysery in bath Of symmetry, witchcraft in my history Vicks salve seepin' in to me Extract strengh, bomb enemies Convert the upright to crooks crawling with centipedes Inching like Burple accordions According to the ruling elute We be the kings of the light bulb that suddenly speaks While you fumbled the free at Sub T we machined the N.R.T. Bad decisions dropped you from a skyscraper and broke your productivity Who you know could do it like this When I switch from Shango to Catholic Priest You yell "Gilead's the beast" Godbody numerology sovereignty 6 is equality 7 is God melanin human and wear it modestly But on the low we know the universe is our property And teach the 85ers losin to moonwalk robotically Engrained and stained with the filth of the mainframe's artistry Snatch the Star of David and pass it to Nick Cannon honorably
See also Process and Hip Hop: Jon Gilll

When I taught world religions in college, it became clear to me that, for some of my students, the most important world religion is hip hop.  Granted, it was not included in my textbooks, but hip hop culture has all the characteristics of a religion: community, meaning-making, rituals (rapping, dancing, artwork), myths and stories about the past,  trances and other kinds of ecstatic experience, ethical norms, material culture, eschatological hopes for a new age, and sacred texts, namely the lyrics of hip hop music.

I would sometimes make this observation in the classroom, and some of my students would look at me skeptically.  Especially those who were not very immersed in popular music.  But those who loved hip hop were with me from the beginning. It led me to teach sections on hip hop in a course I taught called "Religion and Popular Music" and to invite speakers from the local community, hip hop artists and lovers, to speak to my classes.

Scholars of Religious Studies today speak of "new religious movements" that are part of "daily life religion" and that are not centered in formal organizations such as churches or synagogues or mosques. These new religions have their home in dance bars and clubs, coffee shops, street corners, and chatrooms.  A large part of their community life is virtual or, as scholars put it, centered in "screen culture."  These new religious movements have their leaders who may not be called "priests" but who in fact function as priests for their communicants, helping create the meanings that informs their lives.  I proposed to my students that, for some, rap artists function in exactly this way.  They are priests or, if you prefer, gods and goddesses, since they not only communicate meanings but create meanings, and enjoy allegiance from their devoted fans.

*
​
As these conversations unfolded in the classroom, I would point to the work of a kindred spirit and process philosopher: Jon Gill and his book Underground Rap as Religion: A Theopoetic Examination of a Process Aesthetic Religion,  It is part of a Routledge series which now has four titles.

Beyond Christian Hip Hop: A Move Towards Christians and Hip Hop
​Underground Rap as Religion: A Theopoetic Examination of a Process Aesthetic Religion​
Kendrick Lamar and the Making of Black Meaning
Australian Indigenous Hip Hop: The Politics of Culture, Identity, and Spirituality

I want to say a further word about Jon Gill's book.

Of course, all communities do this to some degree.  White communies, brown communities, rural communities, urban communities, rich communities, poor communities.  The uniqueness of hip hop culture is its vision of the New Universe and the four media by which it lives out this vision: dancing (b-girls and b-boys), graffiti art, d-jaying, and rapping.  These are its practices.

Some might think that an underground hip hop community is, by definition, all black, but Jon Gill does not think so.  While obviously influenced by black or Afro-diasporic culture, it is, or can be, multiracial and multicultural. See, for example, Australian Indigenous Hip Hop in the Routledge series.  Or, in this website, the page on Afghan Rap.  The meaning-making of hip hop culture today is trans-national and multi-ethnic even as it is also, in so many settings, African-diaspora in feel and mode.

For hip hop enthusiasts, the meanings of hip hop are twofold.  On the one hand, they sp[eak to the meanings of their lives in the present: happy, sad, hopeful, angry, pissed off and too often pissed on, anxious, fun-loving, inwardly free even if outwardly constrained.  On the other hand the meanings are the potential meanings of what Jon Gill calls the Next Universe.

The Next Universe is an alluring and evolving possibility for social and individual flourishing that is always present, at least incipiently, but which is never fully exhausted by any approximation.  Its characteristics include peace, justice, community and fun.

Moreover, says Jon Gill, the Next Universe has a practical side.  The allurement of the Next Universe can result in an after-school program in a local community, a community garden project, a music and arts festival, a small business that serves the community.  These projects are not simply applications of abstract ideas or, for that matter, of hip hop lyrics.  They are creative performances as well: created out of the same energy that propels underground hip hop.

Toward what kind of community does the Next Universe beckon?  In the process world we speak of them as compassionate communities: that is, communities that are creative, kind, participatory, inclusive, diverse, multifaith, humane to animals, and good for the earth - with no one left behind.  These are the units of what we call "Ecological Civilization."

To be sure, such a community is not all about harmony.  It includes zest and competition, kind of like dharma combat in Zen Buddhism:  Who's the better rapper? Who’s the better dancer?  But, as Jon Gill emphasizes there are no fist fights.  The competition is within the orbit of love.

Gill himself is part of the underground hip hop community.  He is a scholar and also an artist: a “scholartist.”  And at the end of his book he explains what the movement has meant to him.

As a part of the community of the “Next Universe” of underground hip-hop for years, I am an eyewitness to several of its wonderful transformations of the context as a result of interpretation and re-presentation. It has brought us all together, enabling us to learn from one another. As the b-girls rotate upon their heads and the rappers perform spoken delicacies transmitted through 500-plus-watt amplifiers, the DJs spin their edited versions of Led Zeppelin’s “No Quarter” on one turntable while blending it with a James Brown break beat on the other. The graffiti artists secretly unsheathe their Sharpies and post-modern hieroglyphics on the side walls of the restroom stalls of the club. It looks like this in several combinations. No one has seen a fist fight yet. We all recline, create, and philosophize together. We are a unity among diversity. We have yet to see the best of it. Our children will relish in this “Next Universe” more than we ever have or will. Peace, unity of all, and all having fun and learning of each other is the scripture rhymed on our lips and spray painted upon our hearts. This is just how the Gods and Goddesses would have it to be. (Gill, Jon Ivan. Underground Rap as Religion (Routledge Studies in Hip Hop and Religion) (p. 169). Taylor and Francis. Kindle Edition)

With all of this talk about peace, unity, and fun, we best remember that it is always in contrast to, for so many, the way the world is actually experienced.  The act of creating many out of one -- whether a community garden or a new set of rhymes -- must be honest about the present if there is to be space for the future.  That honesty can take the form of struggle, humor, anger, hope, prophetic rage, all mixed in with unrealized hope for the Next Universe -- and all articulated in the brilliance of lyrics that conflate any interest in "white" syntax that takes itself as normative.  The subversive nature of hip hop is aimed at subverting conventional norms for the sake of creating post-conventional and for that matter post-colonial space: a space of freedom and joy for each and all, spray painted into the heart.