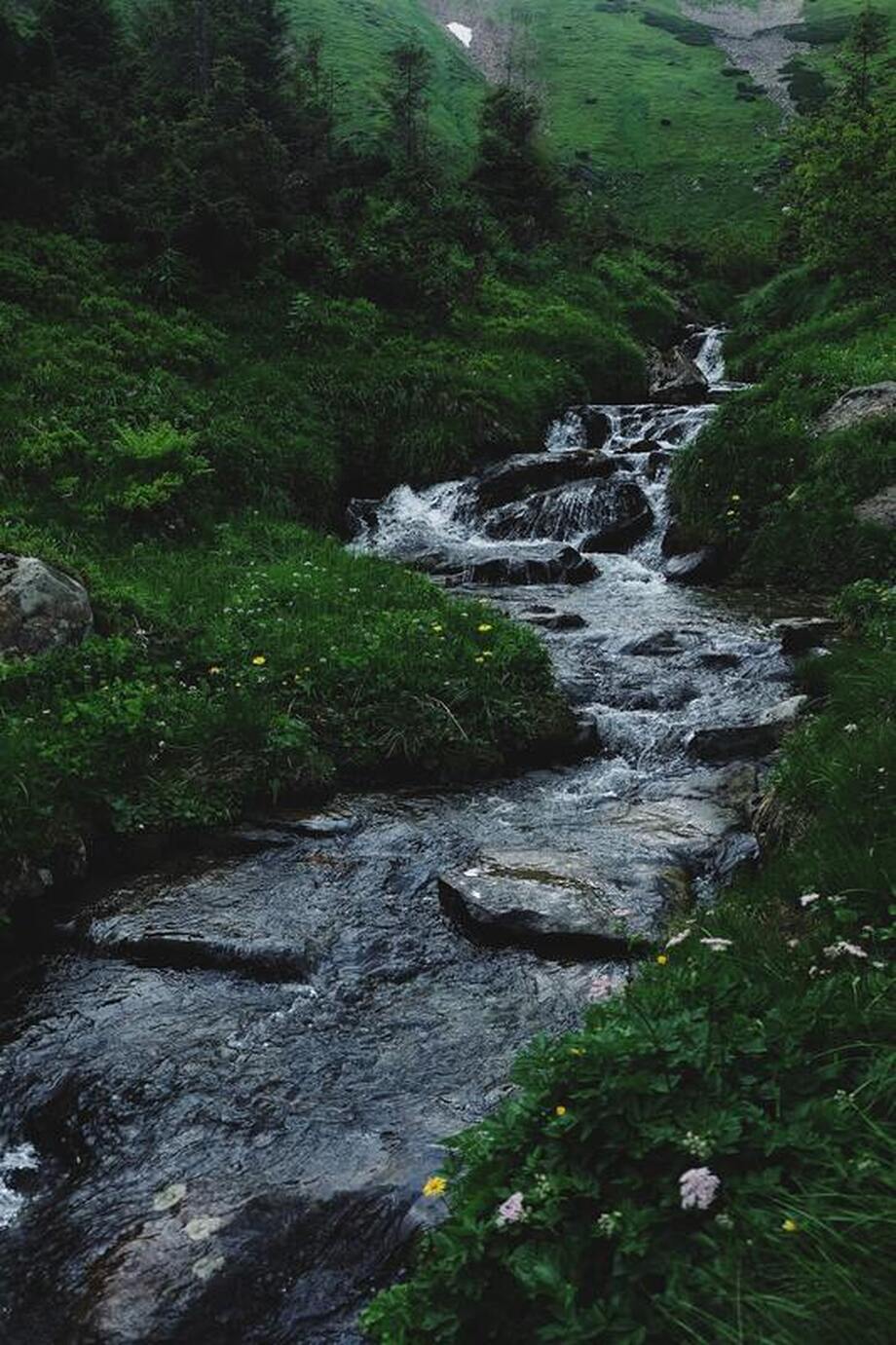 Photo by Oleksandra Bardash on Unsplash
​

All things flow, including religions. They can change over time, for better or worse. They can flourish and decline, live and die. To belong to a religion is not to have a solid anchor upon which to rest your life. It is to swim with others who are also swimming. Or at least to wade. The good news is that God is a river, too. Religions, at their best, are ways of swimming in the Sacred Stream. Let nothing congeal.

from THE COSMIC SPIRIT: Awakenings at the Heart of All Religions, the Earth, and the Multiverse by Roland Faber , Cascade Books, Eugene, Oregon

The flows of things are passageways of life and death. They convey to us what our lives through time reveal about our identity: even if we were a certain stream with a certain name and a defined environment that we could not just abandon without changing the surroundings, nevertheless we would not remain the same. We are a passage of becoming, and, through all of our changes, we still retain our identity as a particular stream of life. It is a gift to look at a river’s flow and, at the same time, to see in a grand vision our life laid out in that way as a stream of experiences and events, situations and forces of flow, and to transcend in such a visualization the simple illusion of personal identity as some kind of thing or substance or fixed essence. Instead, if we become the flow we visualize (that which we always already are), contemplating the whole life we have lived and are in the process of living as such a stream, then we will also realize the deep implication of this grand passage: that all we are, are the events in which we overflow, stream on, and invite the world to become floating, swimming, surfing, diving into us. But we can also see that we thereby mirror the life and death not of ourselves alone but also those of all who or that “trust” to enter it. In a way, we become conscious of our life that lives without the possibility of halting, streaming away its life. What, in this image, can it mean to be persons? We come from wells or rain; and at the end of the stream, if you are lucky and do not percolate in the desert, is the ocean in which we disappear before we rain down again on a riverbed waiting to be filled with life.

The flow of things does not spare religion, too. Religions are such streaming pathways of spiritual transformation. Spiritual paths are such rivers of life and death. We can only be transformed if we let go and enter their stream, dive into them, indicating the death of self and resurrection to a new reality toward which they transport us. But we cannot follow such spiritual paths without being transported to other places. They are streams of change through space and time, cultural and historical relativities, and the relativities of their truth in relation to other such paths. Here, one of the deep meanings of the transreligious nature of religious paths becomes tangible: that no religious tradition or spiritual path can exist only in its own identity, as even such an identity is defined as a flow, a permanent change. No mind sharpened by the memory of history and an eye for the emerging processes of religious becoming can avoid arriving at this insight. Nothing stays the same “in itself,” even if one path is different from another, like two rivers that are not the same.

Also, no path can exist without overflowing and inviting the world into its stream, thereby creating its identity in the first place. All religious paths are in such constant and deep communication with the world and the whole ecosystem of the religious, spiritual universe, as well as with all other “spirits” besides. And religions are passages in another sense: they are born and they die. They rain down like divine revelation or a gift of the universe, always giving birth to new life when the Spirit of life replenishes the cosmic landscapes in ever new springs of becoming. It is these landscapes that produce the different religious traditions and spiritual paths as passageways on their course to either grace the desert or the ocean, where they again disappear into the arid earth or the salty pool from which they will be returning as clouds, rain, and dew, feeding springs and vegetation.

No religious or spiritual path is “better” than the others, even if some of them are mighty like the Amazon, or fecund like the Nile, or holy like the Ganges, or known for religious events like the river Jordan. But why has the mountain brook less value—may it not be closer to the source, the spring, and responsible for mighty rivers to gather together? And there must always be many such streams flowing through a fecund landscape in order to water it or to drain it of its excess and in order to create the ocean from which they all begin as clouds and rain. And while large rivers may carry all the poisonous influences of their territory, of religious or human history, small creeks may be clear and refreshing, fragile but simply enlivening and healing. Eventually, the spiritual seeker, as she gains consciousness of the vast world beyond any limited environment, some kind of universal consciousness, will come to this insight: that the paths of religions and spiritual experiences are expressions of the cosmic Spirit of life that circulates through the processes of renewal symbolized and expressed by the cycle of water transfiguring itself between ocean, clouds, rain, springs, and rivers.

God is a River, Too

A Song from the album Take Heart by Velma Frye
​ - Lyrics by Macrina Wiederkehr, OSB
​