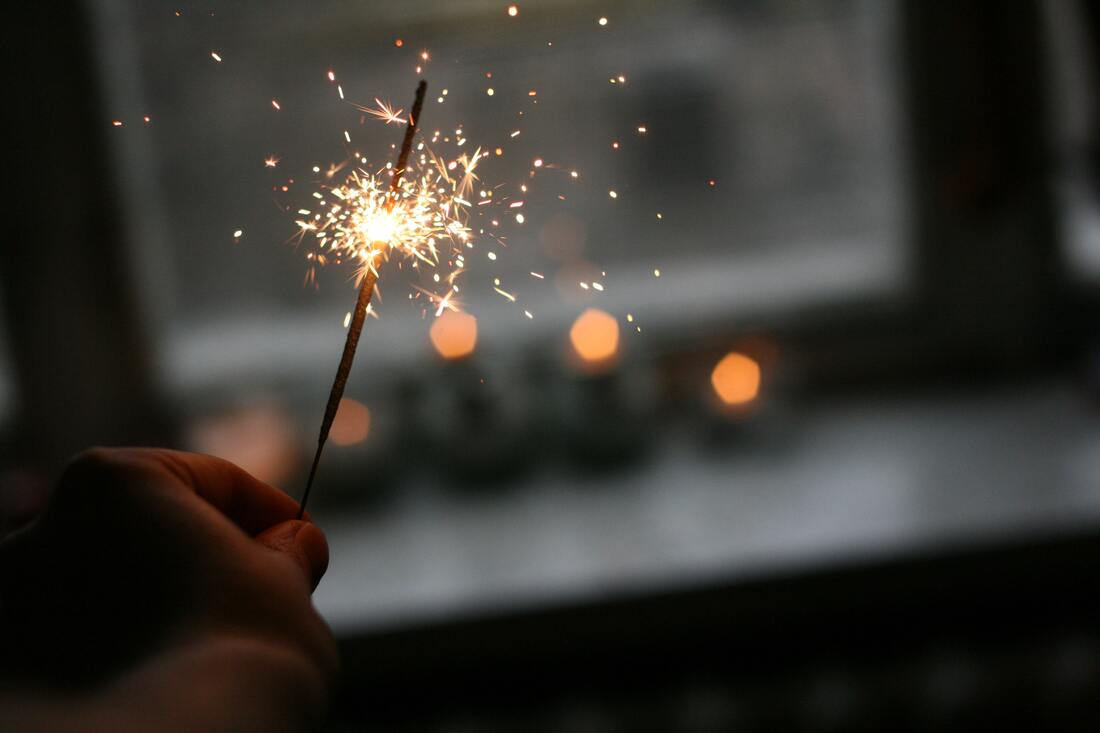 The Hidden Holiness of the Secular New Year

Joy for its own sake, laughter and conviviality without pretext, meeting time's advance with unapologetic delight, raucous noise, good friends — these are nothing less than the eruption of the hidden light cracking the conventional crust of our mature good sense, our dehumanizing obsession with control, our idolatrous reliance on possession as salvation.
​
-Rabbi Bradley Shavit Artson

​
For as long as I can remember, the celebration of the secular new year has been among my favorite of occasions. I loved it when I was an atheist, I loved it when I discovered God and religion now, and I love it still. Despite (or because) of its rampant secularity — its raucous parties, loud horns, gaudy streamers, pointless parades of dazzling loveliness — lend it a "Cinderella-at-the-ball" wonder. What could be more carnal and compelling than champagne's popping corks, the dropping ball at midnight.

New Years celebrations don't recall any great event, any moral virtue, and noble hero. Yet I and countless millions are drawn each year to celebrate for the sake of sheer celebration.

In a world of relentless violence, racism, global destruction of the biosphere, an ongoing war against women, marginalization of those with special needs, suspicion of anyone different, and a growing and pernicious gap between the richest 1% and everyone else, maybe we can see some deep and subterranean light to be refracted in our coming together, in affirming this occasion to rejoice in each other, in our still being alive, in remembering to savor the passing of time.

We live in a world of constraint, distinction, and division. The product of some 14 billion years of energy distilling into space and matter, as cosmogony cooled into physics which emerged in turn into chemistry, then biology, then psychology, then self-awareness, then awe. That last stage is the shocker: that a cosmic system evolved from physical restrictions, risk taking, and lucky breaks should in the end look back on itself with a sense of marvel and of mystery, as though something wondrous were hidden just beneath the surface of its apparent facticity — scattered hints of a buried treasure, a luminous significance illuminating all.

In one of its most alluring hints, the Creation story at the start of the Book of Genesis notes that on the First Day:

For three full days, this luminous light bathes the emergent processes of creation. Only after two days more does God create the everyday light we know from our experience, the sun, stars and moon.

Notice the gap: three days of mystery light, which emerges from nothing in particular yet bathes the entire cosmos in its fecund glow. We might well be tempted to call that light "cosmic background radiation." It powers and illumines the expansion of the entire cosmos, yet today is only seen as a distant memory, an occasional echo of its earlier reverberations. With the concentration of matter igniting into stars, that earlier background light faded away. On the Fourth Day, with the creation of the stars, the sun, and the moon, the only light left, the only light we perceive in our world, is the light emerging from the stars, or from energy released from stars.

Where did that earlier, more expansive light go?

The medieval Kabbalists answer that there was a primordial, cosmic light which suffused the cosmos before the creation of stellar fusion. With the arrival of the stars and the sun, that mystical light was hidden away from clear view, and is now only visible with an inner eye, and only to those who look for it. In the words of the psalmist, "Light is hidden for the righteous, and for the upright of heart (Psalm 97:11)." According to the Kabbalists, our job is to locate those hidden sparks of supernal light, and to set them free. Light, in order to illuminate, must be free to bounce off of something!

Maybe that's the spiritual message lurking just under the surface of the raucous and pointless celebrations of the New Year. We don't need a reason to rejoice. We need each other. We don't need to define a specific event to celebrate; life is sufficient, both as challenge and as gift. In reserving a night to celebrate in formulaic abandon, humanity hoists a lantern which we all can share, a moment we each experience together, an elation that sweeps global humanity like a wave at a stadium of planetary proportions.

Science does indeed adequately account for the mechanisms at play in our cosmic story. But lurking just under the surface of that objective account pulses a living light, made visible in the experiences and emerging consciousness of a cosmos groping toward expression, toward greater compassion and heightened experience. God's lure, the invitation to optimal living, is that hidden light, secreted away and lurking just beneath the facts of our objective world.

Joy for its own sake, laughter and conviviality without pretext, meeting time's advance with unapologetic delight, raucous noise, good friends — these are nothing less than the eruption of the hidden light cracking the conventional crust of our mature good sense, our dehumanizing obsession with control, our idolatrous reliance on possession as salvation.

In this most secular of celebrations lies hidden the most vital of religious purposes. The light is there to be found.

Party on!
Bradley Shavit "Brad" Artson (born 1959) is an American rabbi, author, speaker, and the occupant of the Abner and Roslyn Goldstine Dean's Chair of the Ziegler School of Rabbinic Studies at the American Jewish University in Los Angeles, California, where he is Vice-President. He supervises the Louis and Judith Miller Introduction to Judaism Program and provides educational and religious oversight for Camp Ramah of California. He is Dean of the Zecharias Frankel College at the University of Potsdam in Germany, ordaining Conservative/Masorti Rabbis for the European Union.  His books include: