Listening to the Music of What Happens

Why Poetry is So Much Better than Philosophy, Sometimes
​ 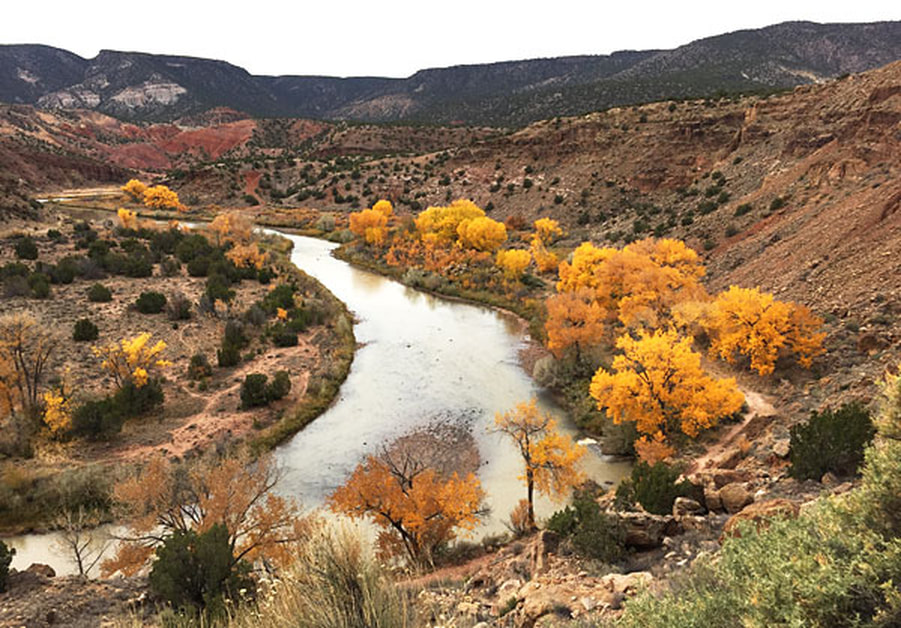 ​To the Chama River Valley *
​by Mary Earle
​

I want to lie down
on your rocky hillside
and pull your dark skin up over my body
like one of my grandmother’s quilts.
I want to snuggle down
with the worms and the beetles
laying my flesh on your flesh,
skin to skin,
listening with a child’s hopeful heart
for an ancient lullaby,
an even older rocking sway,
a tender whisper,
a kiss goodnight.
​
* from ​Abbey of the Arts: Transformative Living through Contemplative and Expressive Arts: https://abbeyofthearts.com/blog/2019/12/04/featured-poet-mary-c-earle/

I have loved poetry since I was a young girl, in part because it sings. Even when there isn’t a rhyme scheme, poetry is the fruit of us humans listening for the melody of the Great Song that sings everything into being. Poetry reminds us to listen. So, when I encounter a poem whose images and phrasing stir something within me, I am both listening to that Song, and invited to share its sacred melody.

So often a poem names something that I need to have named, or focuses my attention on something I’ve failed to see. I write in order to pay attention. I write poems so that I may know what I see. Poetry enhances the practice of mindfulness. Just yesterday I read “Small Kindnesses” by Danusha Lameris for the first time. That poem made me stop, give thanks, rejoice, and resolve to attend to small kindnesses.

​- Mary Earle, as cited in Abbey of the Arts: Transformative Living through Contemplative and Expressive Arts: https://abbeyofthearts.com/blog/2019/12/04/featured-poet-mary-c-earle/

Listening to the Music of What Happens

​Why Poetry is So Much Better than Philosophy, Sometimes
​

As a process theologian I have often wished that process theologians would sound like Mary Earle in "To the Chama River Valley."  Her poem invites us to feel a feeling, to awaken to life, to become mindful of the music of what happens in life.

Indeed, and I'm a little embarassed to say this, because it sounds so judgmental, but I have felt that poets are more mature than philosophers.  Not all poets but some poets; and not all the time but some of the time.  By mature I mean wiser and more helpful, more in touch with the music of what happens. I think of TS Eliot’s career.  He was trained in philosophy and thought for a while that he would teach philosophy, only to be drawn into what, for him and many, was a deeper and more thoughtful world: poetry.

To feel an idea though an image is more, much more, than merely entertaining the idea as an abstraction.  It is prehending the idea, to use Whitehead’s term, in its connection with life itself: the music of what happens.  The image can be a visual image such as barbed wire fence, but it can also be a sound such as that of a guard shouting “stand at attention” or a smell such as that of odor of unwashed prison uniforms.  It is something particular that contains and evokes the idea.

The idea that particulars contain truth was at the heart of the Imagist movement in Western poetry in the early 1920’s.  One of its pioneers was the late (and controversial) poet Ezra Pound.  Pound’s perspective is well represented by David Perkins in The History of Modern Poetry.  Perkins writes:

The pictureless general term lies inert on the page; The images, activating imagination, compel us to undergo something of the experience. Confirming felt knowledge, the images penetrate, hold in memory, formed feeling. They have the suggestiveness and complexity of reality. No wonder Pound distrusted thought that lost touch with the concrete. For Pound it was a question of sincerity, of knowing and feeling that of which you speak we can now, to repeat, particulars, not generalizations.

Back, then, to Mary Earle's poem.  Her images do not lie inert on the page.  They activate our imaginations, confirm a felt knowledge we may already possess in our memories, suggesting the complexity of lived experience.  In this sense they are indeed "sincere."  You sense that the voice who speaks in the poem knows of what she speaks.  And we can know this, too, if we listen.

Mary Earle speaks also of a Great Song that sings everything into being.  She does not say "God," but you get the sense that she could say God if she wanted to.  However, like so many other words, the very word "God" can lie inert on a page or lapse into a cliche.  This is especially the case if God is left to the philosophers and philosophical theologians who then "debate" about God's "properties."  God becomes, in such contexts, an abstract idea resting in their minds, and in their debates they can seem out touch with the concrete world: the world of actual feelings, actual events, actual entities, physically felt. The world of a grandmother's quilt, the rocky hillside of the Chama River Valley, and goodnight kisses.  They are lost in their heads.

Hence the need for poetry to help them, to help all of us, become mindful of the music of what happens by listening to the garden in our yards.

The music of what happens is itself a generality.  The music comes alive only in the actual events of life: the goodnight kisses, the laying of flesh to flesh, skin to skin.  Sometimes it is comforting, sometimes painful, sometimes horrible, sometimes beautiful.  Oftentimes it is all of these things, plus more, mixed together.

I am reminded of Whitehead's words for the concrete.  He coined the term concrescence to say that the concrete is itself something that happens.  It is an event.  And what happens, as he sees things, always involves feelings.  Human feelings, to be sure, but also the feelings of animals, of living cells, and even of the mysterious event in the depths of atoms. All are happening, and all have their own music.

Whitehead also speaks of a deep music, the Great Song what sings the world into existence, moment by moment, not by coercion but by love.  In order to hear this Song we must turn our eyes away from the abstractions, including the very idea of God when it becomes to abstract, and turn toward our grandmother's quilt or the caress of the rock hillside, skin to skin.  In this turning toward the concrete, toward poetry, we find the Song we seek, itself always singing, never quite finished, always on the way, and always in love.  Perhaps this is part of what it means to find our own song.  It is to sing with the Great Song, one kiss at a time.