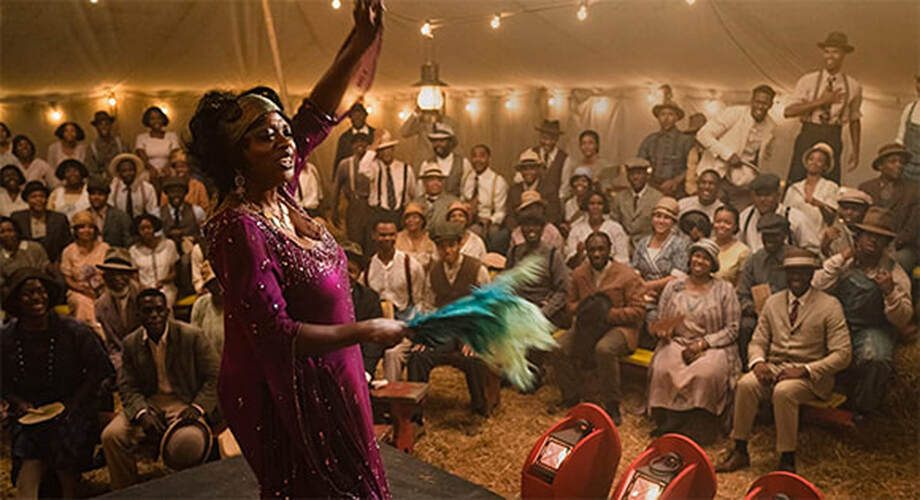 Directed by George C. Wolfe
​
A fierce and poetic study of music, history, and racism.

Film Review by Micah Bucey
reposted from Spirituality and Practice

The United States is still struggling to collectively face the continuing legacy of the lies of white supremacy that are baked into the core of its systematized racism. As some seek and offer anti-racism trainings, others double down on inherently racist ideas, and divisions grow wider. For an issue so intellectually combustible, a visceral encounter is often necessary to enact the imagination. Truth and accountability must be the foundations of unity, and raw, honest art can often be the most effective way to invite an experience powerful enough to move those who are otherwise overwhelmed by our spiritual imperative to dismantle societal assumptions, recalibrate our living histories, and point us in new directions.

Thankfully, Ma Rainey’s Black Bottom, directed by George C. Wolfe and adapted by Ruben Santiago-Hudson from the late and legendary August Wilson’s original stage play, joins a long list of these powerful creations -- offerings that demand to be not only experienced but absorbed until they transform the heart on the way to transforming the mind. It is essential viewing, testifying to harms enacted, lives violated, dreams deferred, and potential faith found.

A description of the film’s relatively simple plot cannot do justice to the depths of emotion tightly stuffed within its short running time. It is one play in Wilson’s Century Cycle, a staggering and lyrical collection of unique stories, one for each decade of the 1900s, that together chronicle the Black American experience throughout time and space. Ma Rainey’s Black Bottom, set over the course of one recording session in 1927 Chicago, finds its foundation in the real-life figure of blues singer Ma Rainey and Wilson’s imagining of a few tense hours shared by Rainey, her bandmates, and two white businessmen. It hums with staggering insights into the enduring creative strength of Black people in the face of the enduring intentional and careless cruelty of their white neighbors.

Every performance is electric, from the smallest supporting player to the two main performances at the heart of the film -- Ma Rainey, portrayed with been-there-done-that bravado by the increasingly vital Viola Davis, and trumpeter Levee, embodied by the equally essential Chadwick Boseman in his final role. One central metaphor explores the tension between Ma’s desire to have her popular music played her chosen and proven way and Levee’s desire to feel his own music in the moment and build upon the themes offered to him, improvising with intimidating agility. It’s a classic exploration of the chasm between generations and tastes, and it’s a spiky score into which the film’s characters contribute their own cacophonous parts, arguing about everything from style to shoes to the existence and silence of God, while they attempt to harmonize their instruments into coherent music. And the music, though there is relatively little of it, is far more than simply coherent; it’s authentic and beautiful.

Surrounding these inside arguments and well-played tunes is the insidious threat of white supremacist systems and attitudes. By the film’s end, the audience will see just how deadly such a fallacious force can be on both the oppressor and the oppressed. Before that calamitous climax, it’s represented in a buildup of microaggressions, from an upsetting encounter with a cop to the ways that the white businessmen try to sneakily cut recording costs around every corner. The death-dealing effects of white supremacy and racism come in jabs both huge and tiny, and the violence is unavoidable, even for ostensibly respected Black artists, shedding stark light on a white-run world in which Black lives only matter as much as their blues can be exploited.

At the end of the quietly harrowing recording session, the music does get made, money does change hands, and life does go on. But the countless moments of psychological and physical violence wound and scar in ways that reflect the ongoing brutality faced by Black people in a system that has been designed to consume their talent, chew up their bodies and minds, and then spit them back out once they have been used and abused.

Ma Rainey’s Black Bottom asks spiritual questions that we have yet to answer, even after centuries of forward and backward motion. It is up to engaged audiences to reflect on whether or not we want to keep singing the same old tune, our progress disappearing again into discord, or whether we are willing to boldly and humbly embark on creative connections that have been calling from the depths of our souls for far longer than many of us would care to admit.
​
Netflix, 12/20