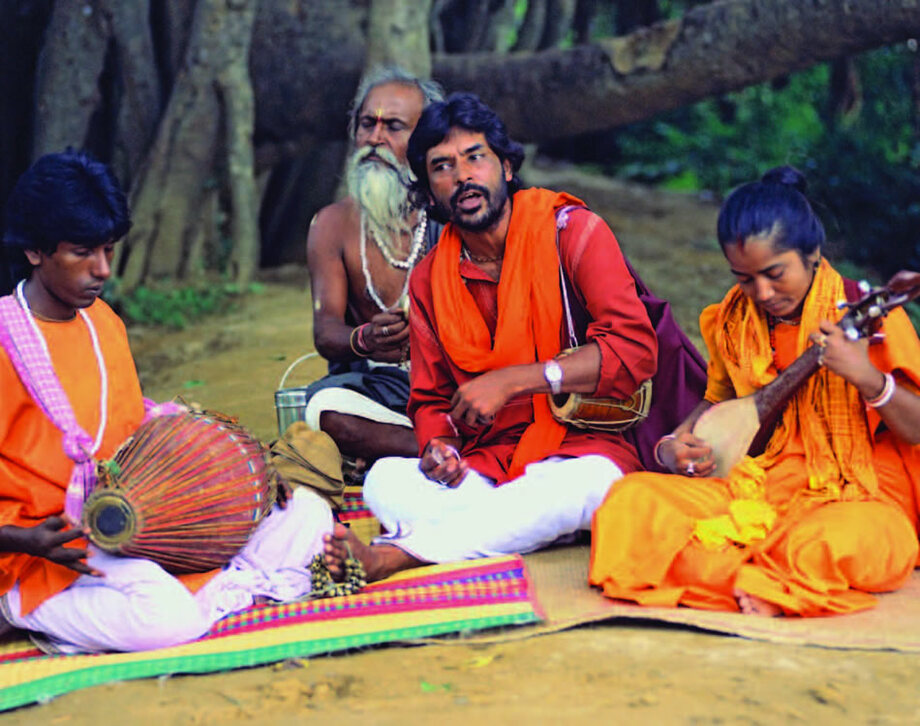 ​ The Bauls of Bangladesh and West Bengal

​Music is my Religion
​

"The Bauls worship music and do not subscribe to any mainstream religion. Their music is heavily influenced by the mixture of cultures which this part of the world has witnessed. The Hindu tantra practises, the Sufi saints of Persia, and elements of Buddhism have all provided an important role in the development of this sect. The lyrics of baul songs are in Bengali language, the local tongue of the region."

Tania Banerjee, The Wandering Bauls Take Music as Their Religion, 14 March 2018
​
"The lifestyle of the modern-day urban Bauls is not necessarily simplistic. Some of the practitioners have even escalated to the status of celebrities, such as Purna Das Baul, Kartick Das Baul. But wandering musical bards, with their heritage rooted in the red soil of rural Rahr Bengal, are not totally extinct. The saffron-robed mystic minstrels can still be sighted in the Khoai belt of West Bengal, walking on the red soil with an ektara in hand. The best way to catch their music live is to attend the village fairs. The weekly fair which takes place every Saturday in the Shonajhuri area of West Bengal is a good opportunity to witness baul performance. In the annual fair of Shantiniketan, known as Poush Mela, the bauls put up a gala concert. They don’t charge for their performance but leaving money on their mat is considered a thoughtful gesture – and a mark of respect for the long history behind their music."

​
​"The Bauls are mystic minstrels living in rural Bangladesh and West Bengal, India. The Baul movement, at its peak in the nineteenth and early twentieth centuries, has now regained popularity among the rural population of Bangladesh. Their music and way of life have influenced a large segment of Bengali culture, and particularly the compositions of Nobel Prize laureate Rabindranath Tagore.

Bauls live either near a village or travel from place to place and earn their living from singing to the accompaniment of the ektara, the lute dotara, a simple one-stringed instrument, and a drum called dubki. Bauls belong to an unorthodox devotional tradition, influenced by Hinduism, Buddhism, Bengali, Vasinavism and Sufi Islam, yet distinctly different from them. Bauls neither identify with any organized religion nor with the caste system, special deities, temples or sacred places. Their emphasis lies on the importance of a person’s physical body as the place where God resides. Bauls are admired for this freedom from convention as well as their music and poetry. Baul poetry, music, song and dance are devoted to finding humankind’s relationship to God, and to achieving spiritual liberation. Their devotional songs can be traced back to the fifteenth century when they first appeared in Bengali literature.

Baul music represents a particular type of folk song, carrying influences of Hindu bhakti movements as well as the shuphi, a form of Sufi song. Songs are also used by the spiritual leader to instruct disciples in Baul philosophy, and are transmitted orally. The language of the songs is continuously modernized thus endowing it with contemporary relevance.

The preservation of the Baul songs and the general context in which they are performed depend mainly on the social and economic situation of their practitioners, the Bauls, who have always been a relatively marginalized group. Moreover, their situation has worsened in recent decades due to the general impoverishment of rural Bangladesh."

Are the Baul traditions independent of organized religion? Much depends on what is meant by organized religion. Certainly the Bauls are influenced by various forms of religion that are organized in many ways: Hindu and Muslim. Some among the Bauls may well identify with one or the other, or both.

Nevertheless, they bring the world an ideal, a possibility, that life can be lived with music as its primary source of spiritual expression, with our without affiliation with organized religion. This is an idea that means much to many spiritual independents around the world, especially those who are disaffected with organized religion and for whom music is indeed a sacrament. Popular music, classical music, folk music, art music. The Bauls don't just sing their music, they typically dance it. They don't leave the body behind, they find divine bliss in the body, as mediated by music.

What struck Tagore was the "emotional sincerity" of their music. A "yearning of the heart for the divine."

In the Spiritual Alphabet offered by Spirituality and Practice, "Y" is for Yearning and "J" is for Joy. Put them together and you have Yearning for Joy. The Bauls would say that the Joy yearned for is itself tasted in the singing and dancing of their songs. and that this Joy comes from a place where sound meets Silence. In the spiritual alphabet "S" is for silence. ​"In this intimate and moving interview of Parvathy Baul by Zaya Benazzo, Parvathy tells of her first meeting with a Baul in a railway carriage in Bengal. She describes the nature of the relationship between guru and disciple and transmission in the Baul tradition, and ends by singing a song of devotion to her guru, accompanying herself on a one-stringed ektar...Parvathy is a part of a living nondual wisdom tradition transmitted from teacher to student for thousands of years, song by song, melody by melody. In every aspect of its expression Baul points to the nondual nature of reality.

Unlike the traditions suspicious of the body and of human experience in general, the Baul tradition celebrates embodiment and sees singing and movement as a way to open the Higher Mind and incarnate it. “Until you experience it in the body, it is not going to stay.” Parvathy explains, ”So we say, bring it down.”

It is difficult to listen to Parvathy's breathtaking melodies without something deep in the heart being profoundly moved. Her singing emerges of deepest devotion, evokes the great longing of the soul, offers a living thread, a lineage leading to the Feet of Reality. Parvathy, is a testament to the nondual heart of devotion. “Make your life into a prayer,” she reminds us in the interview we want to share with you today, “Every action has to come from there.”

Baul Singers and Their
​Music Philosophy
​

Music philosophy of Baul singers is their music itself. They teach through musical experiences. Music is expression of God for Baul singers. There are two creative powers participating in it. They consider the Music as eternal Paramathman flowing to the Jeevathman, the soul. The temporary is not the Paramathman. The singer is jeevathma. While Nada, embodied God is the music . Veena Flute and Drum are representing Nada . They are symbols of the nameless, formless Paramathman. Symbolism and philosophy behind music is communion of God and Man. Philosophy of spirituality of music of the Baul singers of India.
Open Horizons