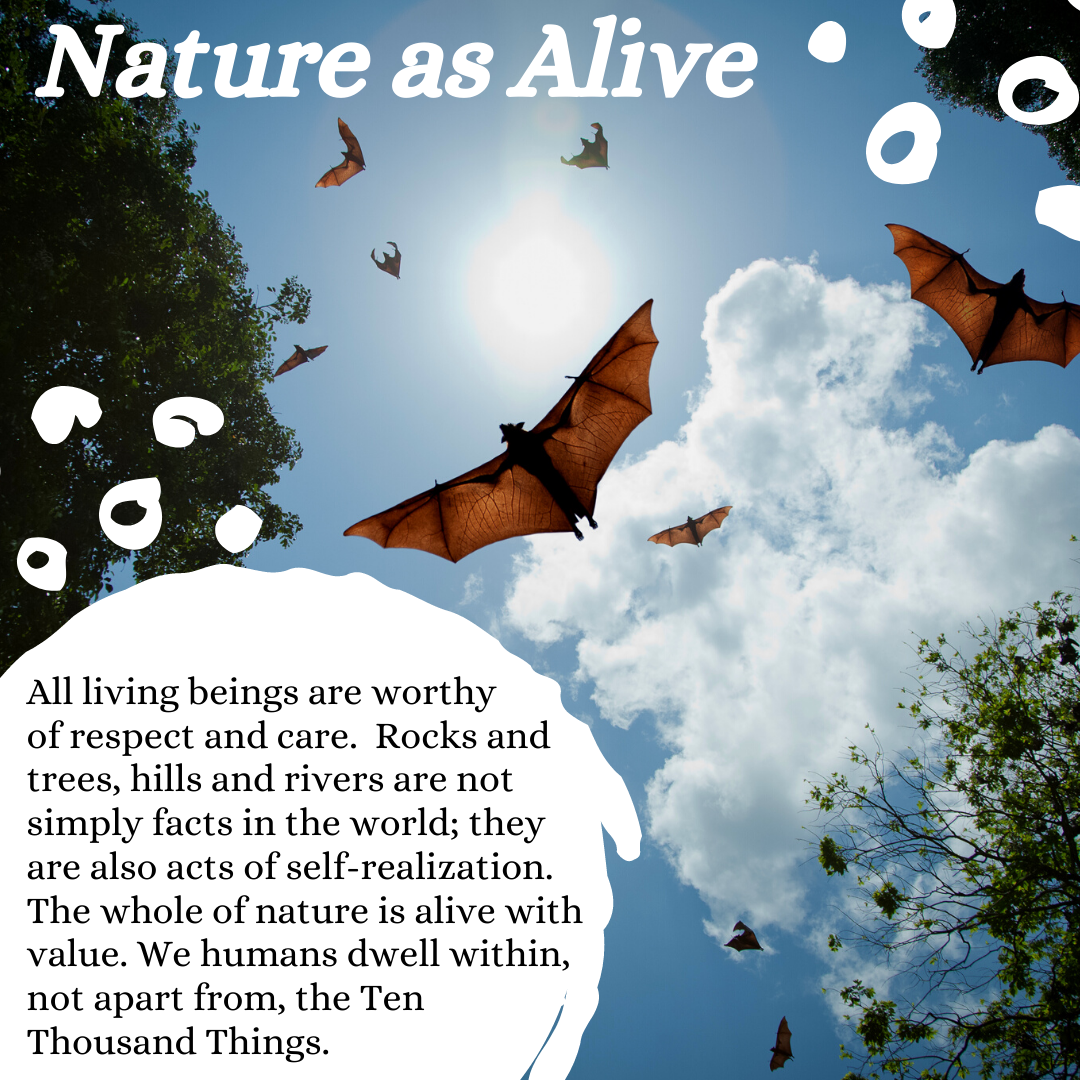 ​One of the twenty key ideas in the process outlook on life is that nature is alive.  Indeed, Nature Alive is the title of one of the chapters in Whitehead’s Modes of Thought.  What can it mean?
​
​What is Nature?

The idea that nature is alive means that there is no utterly 'dead' matter.  To use Whitehead's language in Process and Reality, there are no vacuous actualities.  Everything we see around us and find within us own bodies is bristling with energy and emotion, feeling and value.

Whitehead's particular way of articulating this aliveness systematically is his analysis of momentary occasions of experience.  He proposes that the fundamental units of nature, the building blocks so to speak, are momentary happenings.  John Cobb suggests that the two primary examples we have of such occasions are quantum events within the depths of atoms and our own immediate experience.  Here is how Cobb puts it:

The two clearest examples of actual occasions are, thus, a momentary experience, whether of a human being or of some other animal, and a quantum of energy. By giving them the same name, Whitehead calls attention to what, with all their differences, they have in common. First, we may point out what they are not. They are not “matter” in the Greek or the modern sense. That is, they are not passive recipients of form or action. They act to constitute themselves as what they become.

Second, they become what they become out of a given world. What they are is largely a function of what other things are. In the case of the quantum, it is what it is largely because of the quantum field in which it occurs. In the case of a moment of human experience, it is what it is largely because of the character and content of antecedent human experiences and the neuronal events in the brain. But the principle of uncertainty in the case of the quanta and our awareness of an element of choosing indicate that, however much it is limited by the past, an actual occasion does decide exactly what it will become. Also, in both instances, what it becomes informs future actual occasions. An actual occasion is acted on, it acts in its own synthesizing of its data, and it acts in future occasions. The word “actual” is rich in meaning.

Those who are deeply influenced by Whitehead will see the whole cosmos as consisting of actual occasions of experience.  The Ten Thousand Things will be, in a way, Ten Thousand Happenings.

For Whitehead, feeling is everywhere.  Here the word feeling does not refer to conscious feeling or self-conscious feeling.  Feeling means something closer to what we might mean by perceiving.  It is the act of feeling the presence of something other, and thus taking that other into account from a subjective point of view.   Whitehead calls it prehending.

The other that is prehended may be a memory, a sensation within your own body, another person or plant or animal, a sound, an idea, a hope, an emotion, a fear.  It may be the air around you.  It is other, not in the sense that it is external to your body but in the sense that it is felt or taken into account subjectively.  When you remember something you felt yesterday, you are feeling something other than you in the here-and-now.  This other is both more than you in the here and now  and also, thinks Whitehead, part of you in the here-and-now.  It is the objective datum of your immediate prehension.

Whitehead’s proposal is that something like feeling or prehending is happening throughout the Ten Thousand Things, even in empty space.  This is obvious in other animals and perhaps also in plants.  They are always taking into account their surroundings.  Even very small organisms, microbes for example, are doing this.  But Whitehead believes that something like this is happening in objects we might otherwise consider non-living: mountains and water and air, for example.  He is not proposing that they perceive us in conscious ways or that they have conscious aims and intentions, but he is proposing that they are filled with energy and that wherever there is energy there is  something like feeling and emotion.  John Cobb puts it this way: “He affirms that what we know subjectively as emotion is measured objectively as energy.”

​Whitehead adds that wherever there is feeling, there is value.  Here, by value, he means subjective immediacy or interiority.  This interiority is not feeling along, it is also the act of aiming at satisfaction and enjoying whatever satisfaction is achieved,  He calls it self-enjoyment.  We might also call it self-realization.

​What can this mean for us ethically?  It does not mean that we need to treat bones as they were alive, or that we need to avoid stepping on stones because we might hurt them.  But it does mean that we can rightly sense that there is something like life, like feeling, everywhere.  Nothing is entirely dead.  Things are just alive in different ways.