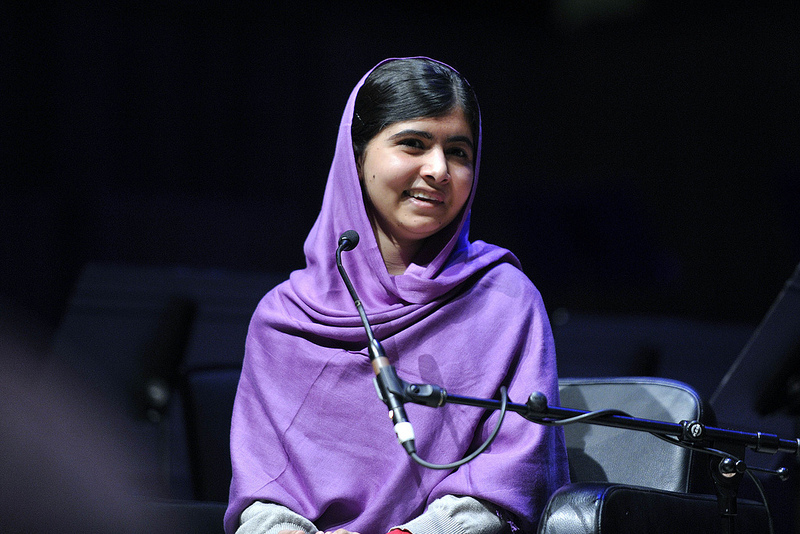 Patricia Adams Farmer offers a Process Appreciation of Malala Yousafzai
​
Just when we thought that the moral courage of Gandhi and Martin Luther King and Cesar Chavez and Rosa Parks was a thing of the past, the world surprises us with a goddess of goodness:  Malala.    The sixteen-year-old Pakistani Nobel Peace Prize Nominee, who survived the brutal shooting by the Taliban for daring to be educated, stands as a model of moral courage for our time.  But what makes Malala Yousafzai tick? Why doesn’t she cower in the corner in fear for her life?  Why does she put herself out there, over and over, preaching education for girls, knowing full well that she stands squarely in the cross hairs of Taliban hatred?

Perhaps the answer lies partly in her faith. We see in this BBC interview with Andrew Marr that her view of God cuts against the grain of Taliban’s view of God.  “They were killing people for tiny issues,” she said, like dancing or not being dressed properly.   “They thought that God is very conservative, God is very tiny.”  She says that at judgment time, the Taliban God would ask about how one is dressed or the length of one’s beard before ushering one into heaven.   But she says no.  God is more concerned about character, about kindness, about how we treat each other.  Malala’s God is more like Whitehead’s God—a big God—a God who values justice and kindness and the power of education.   Learning expands the mind, the soul, the psyche—whatever you call it.  It makes us bigger. Learning calls for courage to move out beyond the impoverishment of tiny values, tiny ideas, and even a tiny God.  Malala believes in bigness and lives it at the risk of her own safety for the sake of all girls and women who live tiny, windowless lives in patriarchal worlds where power lies in the hands of a few.

From a process perspective, we might say that courage--moral courage— comes from a divine place within each moment of self-creation.  That is, against the heavy weight of fear or revenge—natural human feelings – Malala is responding to something rare and beautiful and divine, what Whitehead calls  “the initial aim of God.”  That is, among all the possibilities for self-creation, Malala is responding to a divine lure:  a lure toward the teleology of Beauty in the world, a lure toward bigness, toward intense harmonies made up of diverse people, religions, and cultures.  It is a lure to rise above evil itself to fulfill her own special calling in life.  Her mission for girl’s education is born of her values, her Islamic faith, and her experience of personal freedom through learning.   Is it any wonder she is an inspiration to people all over the world?

I used to teach girls Malaya’s age, and she reminds me of that refreshing idealism in the eyes of teenagers, that natural passion characteristic of youth.  Some youth take those ideals into self-destructive violence as we witnessed at the Boston Marathon. But others like Malala are attune to something much wiser and higher and bigger.  She is a model for Islam, a model for relational/persuasive power over unilateral/coercive power, and a picture of what moral courage looks like.

Malala does not believe in a tiny God, and neither should we.  Perhaps that’s the key to everything.