This page offers springboards for discussion at the intersection of open and relational (process) theology and Tibetan Buddhism, in musical and verbal form, with particular focus on life as a continuing journey after death, the aim of which is to become a fully awakened heart.
​

Rudiments of a Tibetan Process Theology

We live in a multiple-dimensional universe of mutual becoming.  All is in process.

​The aim of life is to have an awakened heart, filled with wisdom and compassion for all sentient beings.

The journey toward an awakened heart began in previous lifetimes and unfolds in this life.

The journey advances to the degree that we realize the preciousness of each moment, the mutual becoming and inter-connectedness of all things, and extend loving-kindness to each and all.

The journey continues after death in one or another of the many dimensions of the universe.

We who undergo the journey are not self-contained substances.  We are ongoing series of experiencing subjects, different at every moment.   In truth, we have "many lives" even in this lifetime.

When we die, the series of momentary experiences continues, because it is not precisely identical with the physical brain.

For a period of 49 days we continue in a bardo state -- an in-between state -- where we can realize enlightenment.
Every moment is a bardo of sorts, a liminal state between past and future.  Liminality is momentariness.  Part of wisdom lies in knowing the bardo-quality of the whole of life.

Reincarnation is continuous.  We don't just go around once in life, we go around many times -- as many as it takes until our hearts are fully awakened.

Amid the journey of our  hearts, we live and move and have our being within a sky-like Mind that is within us and yet more than us.  People in other faiths sometimes speak of this as God.  We call it the Dharmakaya.

However named, the Dharmakaya is the deepest nature of our own hearts and minds.  It is who we are before we were born.  It is, as it were, the primordial nature of God.

The Dharmakaya is also within us as a luring presence, our bodhicitta, our wish for enlightenment.  It is an inwardly felt beckoning to become awakened hearts.

The Dharmakaya is not a king on a throne.  There are things it can't do.  But it is all-compassionate.  It never gives up on us or on anybody.

Bodhisattvas are those who live from the compassion of the Dharmakaya, vessels of love for all.  They are windows to the Dharmakaya.

The Dharmakaya can manifest itself in our imaginations in the form of many different buddhas and bodhisattvas, each of which carry a seed of enlightenment.   Deity yoga is one way that we can practice our faith.

There are many other ways to practice the faith, too: mandalas and mudras and mantras.

It helps to have a teacher, a guru, who can help us practice our faith and who provides a pipeline for the kind of awakening we seek.

The aim of it all is the awakened heart: realizing in thought, word, and deed the sacred quality of all beings and of each moment.

There is no need to postpone the awakening.  We can start right now, through acts of loving-kindness, not only for other people and ourselves, but for animals and plants and the earth.

And we can partner with people of other faiths and people without any faith.  Tibetan Buddhism is a humble way, honoring any and all ways that follow the path of loving-kindness. 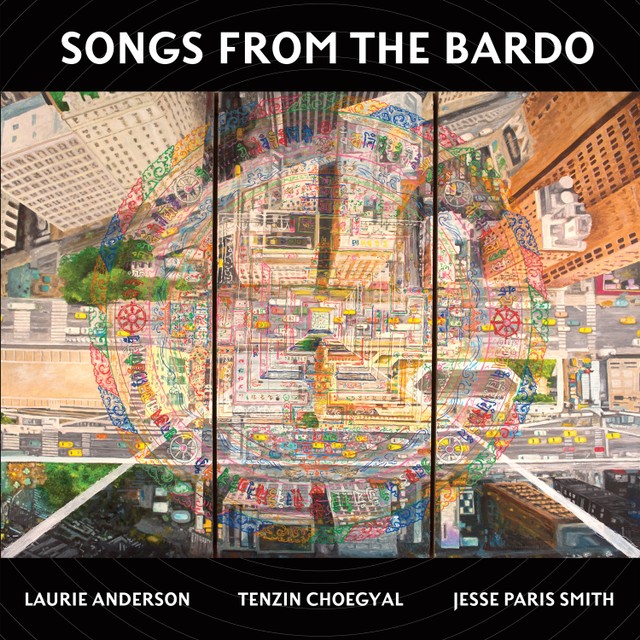 Songs from the Bardo
​

At my grandmother's funeral many years ago, the minister spoke to her even as she had passed away.  Her name was Lillian and I remember him saying: "Lillian, can you hear me?  We want to thank you for all that you are, and we love you."   I was sitting in the pew along with my family and his words meant the world to me.  She has died some three days earlier, but I think she heard him.

I know that some of my academic peers would see the tone and content of the pastor's addressing my grandmother as mere wish fulfillment.  They think that once you die, you die!  Indeed, some of them feel that the very belief in a continuing journey after death is unethical, because it wrongly places our sights on another world.

But, like I said, I couldn't help but feel that my grandmother heard him in some way.  Later that day and in the weeks that followed I spoke to her as well.  She had passed away, moving forward in her journey, and she was not yet at such a distance in her journey that she couldn't hear me.

I found myself then, as I found myself now, reflecting upon the wisdom of the Barto Tothal, widely called The Tibetan Book of the Dead.  Below I offer a couple of descriptions of it, offered by Tenzin Choegyal, from the liner notes of the album above.  Tibetan Buddhists believe that people can hear us after they die for around 49 days, after which they are reborn into another life.   I do not know if my grandmother was reincarnated, except in my heart, but I sure think she was hanging around, in a wonderful and healing way, for at least 49 days.

Still, when people we love die, we understandably wonder: Does their journey continue in anothe plane of existence?  Might the various planes be connected in some ways?  Might we pray for her journey to end in a kind of fulfillment she may have longed for, but did not experience, in this life?

Open and relational theologies are open to these possibilites.  The journeys need not continue forever.  They can continue until fundamental desires for peace and harmony, for wisdom and love, are complete, after which she be reabsorbed into the divine life.

Imagine that the universe has a Mind whose presence is inwardly felt by each living being as a lure, a calling, toward richness of experience in this life and whatever follows.

Imagine also that each living being – your grandmother, for example -- is who she is, and what she is, relative to how she becomes in relation to everything else.  She does not have an ‘inherently existing self’ if that means that she exists independently of all others, all by herself.  Instead she is a process of becomings, of experiencing and responding to the world, again and again.  Each act of becoming is dependent on the entire history of the universe but also carries with it a kernel of freedom, of spontaneous creativity, which enables her to respond to others.  This means that each living being is new at every moment, dependent on countless conditions from the past yet capable of creative transformation in the present and future.

Back to Grandma.  How might we name the cosmic Mind and its presence in your grandmother’s life and, for that matter, your own.

If you are shaped by Abrahamic traditions (Judaism, Christianity, or Islam) and by open and relational (process) theologies, you can speak of the Mind as God and name its presence in her life as her own innermost “initial aims.”  The aims belong to her and to the Mind at the same time.  They are God’s desires for her and her desires as well.

Buddhists might speak of the Mind as the sky-like Mind of the universe itself and its presence as Bodhicitta.  “Bodhicitta is a spontaneous wish to attain enlightenment, found in every person, motivated by great compassion for all sentient beings, accompanied by a falling away of the attachment to the illusion of an inherently existing self.”

​How might this Buddhist idea, presuming that all beings aim toward enlightenment, be understood by people with Abrahamic dispositions?  I suggest that we leave the question open.   Enlightenment itself can be interpreted in various ways; let it simply be a name for whatever is truly liberating and fulfilling in human life, leaving different people to understand it in ways that make sense fo them.  The question is: Might the journey toward this fulfillment continue after death.

Two Views in the Open and Relational (Process) World

For some open and relational (process) thinkers, the answer is “nowhere.”  Their view is the soul, understood as a linear ordered series of experiences, simply ceases with brain death.  If there is a survival of the soul, this survival lies in and only in how it is remembered in that ongoing stream of experience by which the universe itself is gathered together, namely the Mind of the universe or God.  Some imagine further that this Mind recycles the good wishes and deed undertaken by the deceased such that they become fresh possibilities for those who come after them.

However, for other process thinkers, the answer is: “perhaps the journey continues in other planes of existence, at least for a time.”
Here they are relying on Whitehead’s idea that we live in a multi-planed universe of which there are many dimensions, and that the three-dimensional dimension available to the senses is but one of the many.   Some are also building upon the idea, developed by David Ray Griffin, that there is a good bit of empirical evidence for a continuing journey.

For some people in the west, the idea of a continuing journey after death is but wish-fulfillment and thus an escape from the reality of physical finitude.  The more courageous and honest approach, so they say, is to accept the finality of death, physical and psychological and spiritual.   Some among them are also reacting to the deleterious consequences, often foisted upon society by Abrahamic religions, that the final destiny is a “heaven” or a “hell,” with some rewarded by the former and others doomed to the latter.

The Tibetans offer an alternative: the idea of a continuing journey after death, not necessarily everlasting, which provides an opportunity for the departed to attain enlightenment, or an awakened heart, after which there may be a final cessation.  The Tibetan Book of the Dead marks off the various stages the soul undergoes after death, giving grievers a chance to help the soul awaken to the truth of its nature.

The Tibetan Book of the Dead goes well beyond most western perspectives, but carries within it a plausibility for process thinkers of the second type.  They – we – can appreciate and learn from such proposals, finding consolation ourselves, quite apart from whether or not we are self-identified Buddhists.

If we are process theologians, we will also ask how God might be present in life after death.  The answer for most process thinkers is: “In the same way God is present in this life, as an indwelling lure toward creative transformation, relative to the circumstances at hand.”  The presence of God will not be that of a unilateral power imposing “his” will by fiat, but rather a gentle and healing presence, inviting and encouraging a person to grow into whatever forms of wisdom, compassion, and interior freedom are possible.
​
This, then, is one way that open and relational (process) thinkers can take heed of, and learn from, the Tibetan Book of the Dead.  We can recognize that there is continuing journey after death, and we can trust, we can hope, that it is filled with possibilities from God.   We can also make clear that belief in life after death does not reduce our sense the preciousness of this life, but rather enhances that sense.  Every moment is an opportunity, every moment a process of living-by-dying with compassion for all.
I do not doubt that more and more can still be learned about the body.  But I am a believer who is also convinced that more and more can be learned about the amazing capacities of the mind, the soul, and the spirit.  If their influence on the course of events is all considered “miraculous,” then the world we inhabit is thoroughly miraculous.  The events we are likely to call miracles are just the tip of the iceberg.