We Need to Build an Interfaith America.

​Organized religion can help, and so can
a younger generation of interfaith leaders.
​

Interfaith America
'You can bring a dish to the American potluck. You can invite other people to join the event yourself. You can nudge the nation toward being more than what it is and closer to what it might be. Not a melting pot. Not a battlefield. But a potluck where everyone is invited. Where everyone is valued.”

What does it mean to practice open and relational thinking in a interfaith context? It means to have the spirit of potlucks in your heart and to sponsor some yourself. Who knows? You might even imagine the very heart of the universe as a great potluck, yearning to be realized on earth as it is in heaven. 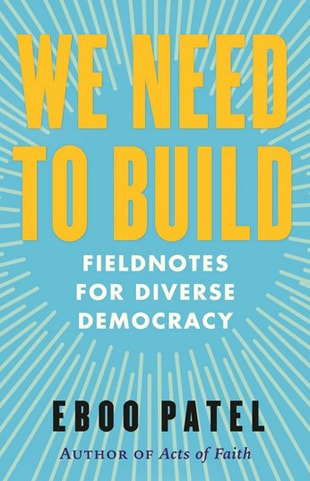 We Need to Build:
​
Field Notes for Diverse Democracy

By Eboo Patel
​
​Book review and interview by John M. Sweeney
for Spirituality and Practice, reposted from S&P website

Eboo Patel has been, for the last twenty years, one of the smartest, most enterprising and creative interfaith organizers in the United States. He is the author of several books, including Acts of Faith and Sacred Ground, but none of them has been as focused on nuts-and-bolts community organizing as this one. He is also one of our Living Spiritual Teachers.

In 2002, he founded Interfaith Youth Core, which focused on organizing young people in order to raise up a generation that would normalize interfaith cooperation. In 2022, the organization evolved into a new name, Interfaith America, reflecting their broadened mission to unlock the potential of religious diversity in the United States.

Patel is an Oxford PhD, but he writes in a very down-to-earth style, with an abundance of anecdotes. For example, in the chapter, “America, the People’s Potluck” he uses the potluck dinner as a metaphor, but he also means potlucks literally, at times, as in: “Potlucks build communities; communities sustain potlucks. It is a beautiful, virtuous circle. But everything starts with a leader.” Patel wants to inspire more people to become local leaders for a vision of democracy that includes all people.

With We Need to Build, Patel wants to inspire and create institutions that recognize and encourage religious diversity and pluralism. He says that a real interfaith America will be defined “as a nation that welcomes its religious diversity from atheism to Zoroastrianism, nurtures positive relationships between those different groups, and engages them in common action for the common good.”

Still, he knows from personal experience that Americans can be racist and ignorant about neighbors who are not white and not Christian. He tells stories from his own life, growing up Brown and Muslim, to illustrate this. He also knows that hatred and bigotry have not simply gone away. But he is a hopeful person. That is, in fact, the great gift of Eboo Patel and this book: He and it help the rest of us see that a just world is still possible.

His vision of diversity and pluralism reflects who we are rather than how we are often described. He explains, “We believe Interfaith America should replace our current understanding of America as a Judeo-Christian nation.” That phrase — Judeo-Christian — began as a civic invention for the good, as a statement designed as a response to anti-Catholicism and antisemitism a century ago; today, it no longer comes close to accurately describing American society.
​
Patel wants to build, and help others build, institutions to do all of this good work. He wants to inspire and train new civic leaders who nurture pluralism and community that is welcoming. People build institutions, he says, and he offers many examples — such as school principals, community integration center directors, YMCA leaders, college student leaders, religious leaders and teachers, children’s center directors, racial-justice experts at the American Civil Liberties Union, and even school bus drivers — who can do this.

His vision is broad, but he also includes small details of what works and what is working. (See the excerpt accompanying this review for an example of an ordinary way that Patel himself, as a young college graduate, modeled building from the ground up.)

Patel defines a strategic institution as “one that instantiates ideals through a web of concrete programs.” He is looking to organized religion to lead the way: “At their best, religions are a network of institutions that seek to make real an inspiring vision that adherents believe was set forth by God, a vision that makes everyone sacred.” He believes that, across our traditions, in all of our communities, we can still do this.

excerpt from We Need to Build

'I know a thing of two about potlucks…. After college I moved to Chicago and took a job teaching in an alternative high school where urban minority youth came to get their GEDs. It was fulfilling but exhausting work, and I was lonely and longing for the kind of community that I had found at the University of Illinois. I had a couple of friends in the same general situation. I lived in a modest apartment that had a small front yard and plenty of street parking. And I knew how to cook exactly one dish — my mom’s famous masala potatoes (made famous by her, not me).

'In the dead of winter in early 1997, I told my handful of friends that I’d cook up a large batch, clean up the kitchen and living room, and put out whatever plates and silverware I had. I asked each of them to bring a dish and a friend.

“From that one winter Tuesday night, the potluck grew and grew and grew. In the spring, we held a solemn ceremony commemorating the passing of the Beat poet Allen Ginsberg. By the summer, well over fifty people were regularly gathering, bringing not just food but guitars, drums, big ideas, and more plates and silverware. A handful of people started coming early to help me prepare the space, and a different crew volunteered to stay late for cleanup duty. It all happened quite naturally — people taking responsibility for their part in the upkeep of the whole.”
Open Horizons