Now Is the Time from National Film Board of Canada on Vimeo.

​On 22 August 1969, the Haida community of Masset, British Columbia gathered for their first totem pole raising in living memory. According to past elders, the small village located on the Haida Gwaii archipelago was once a ‘forest of totem poles’. However, by the 1960s, they’d all been torn down at the insistence of Christian missionaries. Also banned were the Indigenous ceremonies known as potlatches, which, for generations, had been instrumental in building community and passing down Haida traditions. So when the Haida artist Robert Davidson, then just 22 years old, took on the daunting task of carving and raising the village’s first totem pole in nearly a century, and holding a celebratory potlatch alongside it, the occasion sparked a renewed sense of artistic and spiritual purpose among the Haida people.


Written by Tamur Qutab for Psyche 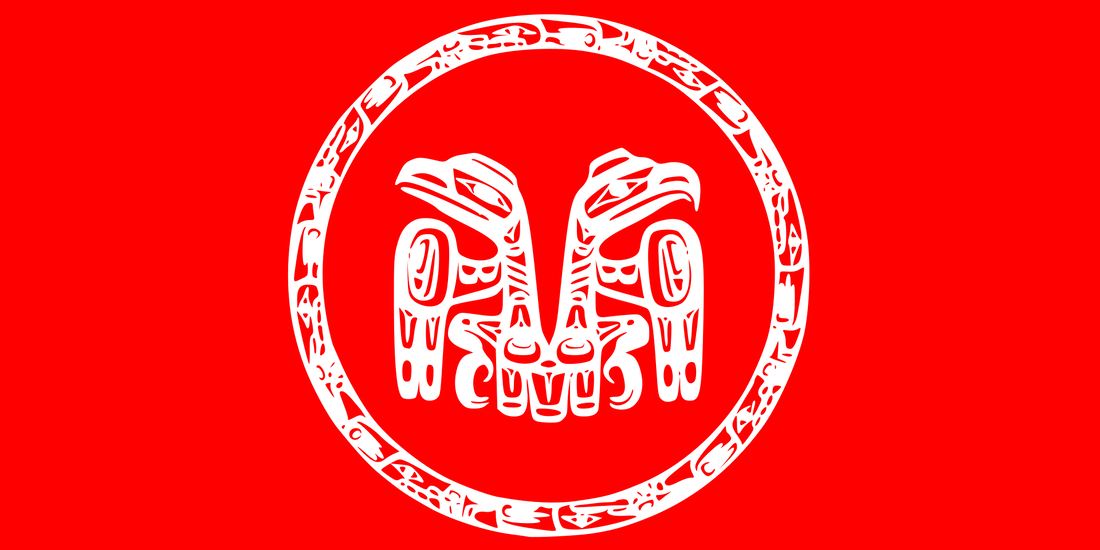 Flag of the Cloud of the Haida Nation

from Wikipedia and Canadian Encyclopedia

"Haida are an indigenous group who have traditionally occupied Haida Gwaii, an archipelago just off the coast of British Columbia, Canada, for at least 12,500 years. The Haida are known for their craftsmanship, trading skills, and seamanship. All Haida belong to one of two social groups — the Eagle or the Raven, sometimes referred to as moieties or clans. Traditionally, Haida always married a member of the opposite group. Clan membership was matrilineal, and each group contained more than 20 lineages. Individuals publicly proclaimed clan membership through an elaborate display of inherited family crests, carved on totem poles erected in front of houses and carved or painted on war canoes, cedar boxes, masks, and utilitarian and decorative objects. Though these cultural and artistic practices are distinctive, they do share similarities with the neighbouring Tsimshian and Tlingit.

"Potlatches were a focus of Haida life. Such ceremonies were a means of reinforcing the social and economic organization, and the interdependence of moieties, lineages and villages. The names of lineages were generally derived from the group’s place of origin. Lineages were property-holding groups. Property owned by a lineage included rights to certain salmon streams, trapping sites, patches of edible plants and tobacco, stands of cedar, bird rookeries, stretches of coastline and house sites in the winter village. Management of the lineage's property was in the hands of the lineage chief. (Canadian Encyclopedia)


"Totem poles (Haida: gyáaʼaang)[1] are monumental carvings found in western Canada and the northwestern United States. They are a type of Northwest Coast art, consisting of poles, posts or pillars, carved with symbols or figures. They are usually made from large trees, mostly western red cedar, by First Nations and Indigenous peoples of the Pacific Northwest Coast including northern Northwest Coast Haida, Tlingit, and Tsimshian communities in Southeast Alaska and British Columbia, Kwakwaka'wakw and Nuu-chah-nulth communities in southern British Columbia, and the Coast Salish communities in Washington and British Columbia.[1]
​
"The word totem derives from the Algonquian word odoodem [oˈtuːtɛm] meaning "(his) kinship group". The carvings may symbolize or commemorate ancestors, cultural beliefs that recount familiar legends, clan lineages, or notable events. The poles may also serve as functional architectural features, welcome signs for village visitors, mortuary vessels for the remains of deceased ancestors, or as a means to publicly ridicule someone. They may embody a historical narrative of significance to the people carving and installing the pole. Given the complexity and symbolic meanings of these various carvings, their placement and importance lies in the observer's knowledge and connection to the meanings of the figures and the culture in which they are embedded." (Wikipedia)

Process philosophy encourages us to recognize the role of the past in the present. The "past" is not simply a set of conscious memories; it is a collective unconscious, alive with its own energies which can, if nurtured, enrich community life in the present. This nurturance is an act of renewing the past through ceremonies and rituals: creating and raising totem poles, for example.

In the creating and raising, in the ceremony, the many become one and are increased by one. The increase is the togetherness, the social bonding, that occurs in the raising. The past becomes a nutrient for the present, thanks to the ceremony, opening the door for a future not yet created.

Thus, a living ceremony is a connection with the past, to be sure; but it also a hope for the future. It carries within its own occurrence possibilities for what can be.

The key is the holistic and bodily nature of ceremony itself, involving all the senses, including the dancing. The nurturant memories of the past are embedded in the body as well as the mind, and they are released by the dancing itself. We don't just think ceremonies, we dance them. The future opens up through the dancing.

Needless to say, not all memories are nurturant. Some are quite traumatic, quite painful. They can be included within a ceremony, as when we dance our anger, but they can also be transformed by the ceremony. The ceremony turns bitter grapes into sweet wine, through the dancing.

It is arguable that the entire universe has unfolded, and continues to unfold, through its movements, its dancing, its ceremonies. The trees dance, the stars dance, the fish dance, the earth dances. Ritual is everywhere. Ceremony is cosmic as well as human. Ceremony is a primary means by which the universe re-builds itself, moment by moment, in a creative advance into novelty.

The "laws of nature" are ceremonies in their own way. They are not imposed from afar; they are habits of nature, recurring again and again and gaining momentum along the way.  They are ways that nature dances. The outcomes of the dancing, the stars and galaxies, the fish, and birds, are the totems. We humans are totems, too. Deep down, the whole of the universe is raising totem poles. Human ceremonies are ways of participating in the larger dance. But it is not only the largeness of the dance that is important. It is the locality of the dancing, the way it renews a particular community worthy of flourishing: the Haida, for example on 22 August 1969.