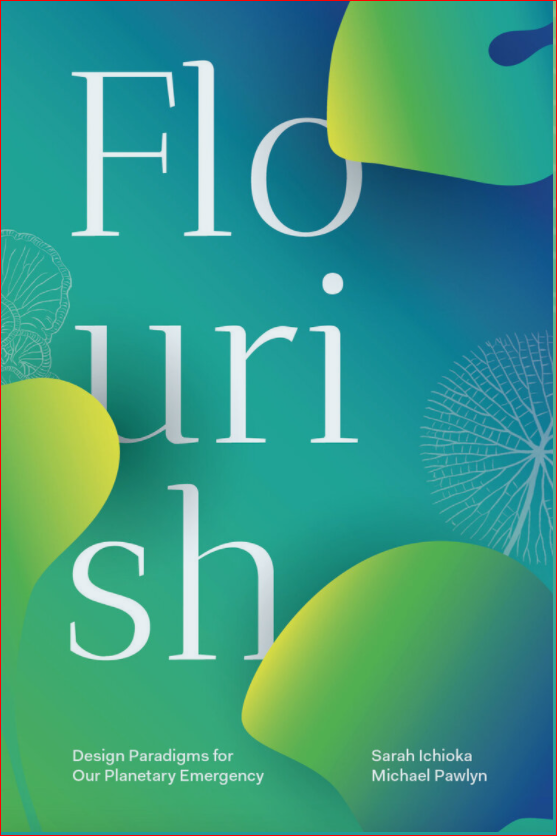 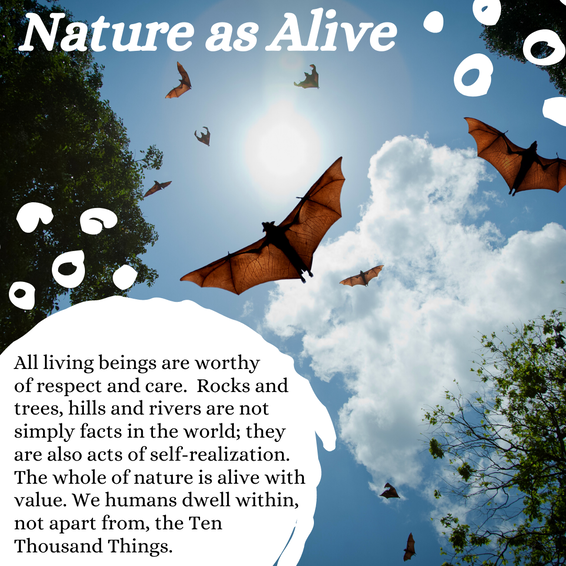 Description of Book
​
​(from Triarchy Press)

"What will it take to restore balance to our world, repair past injustices, and support future generations' survival? Reaching beyond 'sustainability', 'regenerative' practice is increasingly named as a new goal, but what does this emerging term really mean? And which key mindset shifts might enable truly regenerative transformation?

Looking deeply into the web of life that created and supports us, and drawing inspiration from diverse cultural traditions and perspectives, spirited thinkers Michael Pawlyn and Sarah Ichioka propose a bold set of regenerative principles with potential to transform how we design, make and manage our buildings, infrastructure and communities.

Whether you're a built environment professional or client, an activist or a policymaker, Flourish offers an urgent invitation to inhabit a new array of possibilities, through which we can build a thriving future, together."

Introduction -- "...A growing number of people are deeply concerned about our planetary emergency and wondering how we can rise to this seemingly insurmountable challenge. We wrote this book because we believe that the necessary changes lie primarily in cultural, rather than technological, transformation, and that this must occur at the level of mindsets – the shared ideas that determine ... how society works. ...working in the built environment, this (broad) field is our main reference point when defining these shifts and how we might bring them about. We see these shifts as essential to the evolution from ‘sustainable’ to ‘regenerative’ design and development."

Chapter 1: Possibilism: evidence, uncertainty and agency -- "If individuals minimizing their agency can have a contagious effect on others, then it is clear that the opposite can also be true. If we adopt a possibilist mindset that seeks out and assesses the totality of available evidence, that uses creativity to solve problems, that strives to always maximize our agency, that relentlessly challenges norms and myths, could this follow an exponential trend leading to a rapid tipping point?... We are thrilled by the possibility that it could. What we know for certain is that when we refuse to accept the status quo as inevitable and strive to bring about change, we can have a powerful effect in inspiring others to do the same."

Chapter 2: Co-evolution as nature: stewardship and living systems -- "We believe that the way humans see our relationship with nature will be critical to our species’ future prospects, and that addressing the multiple environmental crises of the present moment will require us to completely rethink our position and role on Earth."

Chapter 3: A longer now: deep, cyclical time and holarchic progress -- "It matters which buildings we celebrate. As philosopher José Ortega y Gasset wrote, 'Tell me what you pay attention to and I will tell you who you are'. Whether the focal point of a town is a religious building, a shopping centre or a secular gathering space for public events says very different things about our culture and values. It is therefore worthwhile asking 'What should be the cathedrals of the future?' Could these be buildings that aspire to the deepest reciprocal values, rooted in a deep sense of time and place, sociologically, geographically and ecologically? Could these be projects that in some way enhance our sense of human potential and embody one-planet thriving in beautiful and poetic ways?"

Chapter 4: Symbiogenesis: mutualism, citizen-activism and public luxury -- "A reappraisal of outdated metaphors about survival through competition, and of humans’ innate nature, has created an intellectual space for imagining a new way of living based on symbiogenesis. This conceives of design as a fundamentally inclusive, negotiated and co-creative process that can generate new structures and ways of living. To achieve this will require not just a change of perspective for design teams but also a rethinking of design training, styles of collaboration and forms of governance."

Chapter 5: Planetary health: qualitative development, living metrics and flows -- "Keeping the goal of Planetary Health in mind should make it easier to decide when development is strictly necessary (for instance, to bring poorer parts of the world above the social foundation) and how to distinguish between different types of development. Qualitative, regenerative development that enhances planetary health is possible and we must learn to do better than just mitigating the negative impacts of growth. In a planetary emergency, there needs to be a strong bias towards avoiding unnecessary growth. This will require far more refurbishment of buildings and far less newbuild, designing out waste in all its forms, and pursuing durability and cyclicity in our material use." 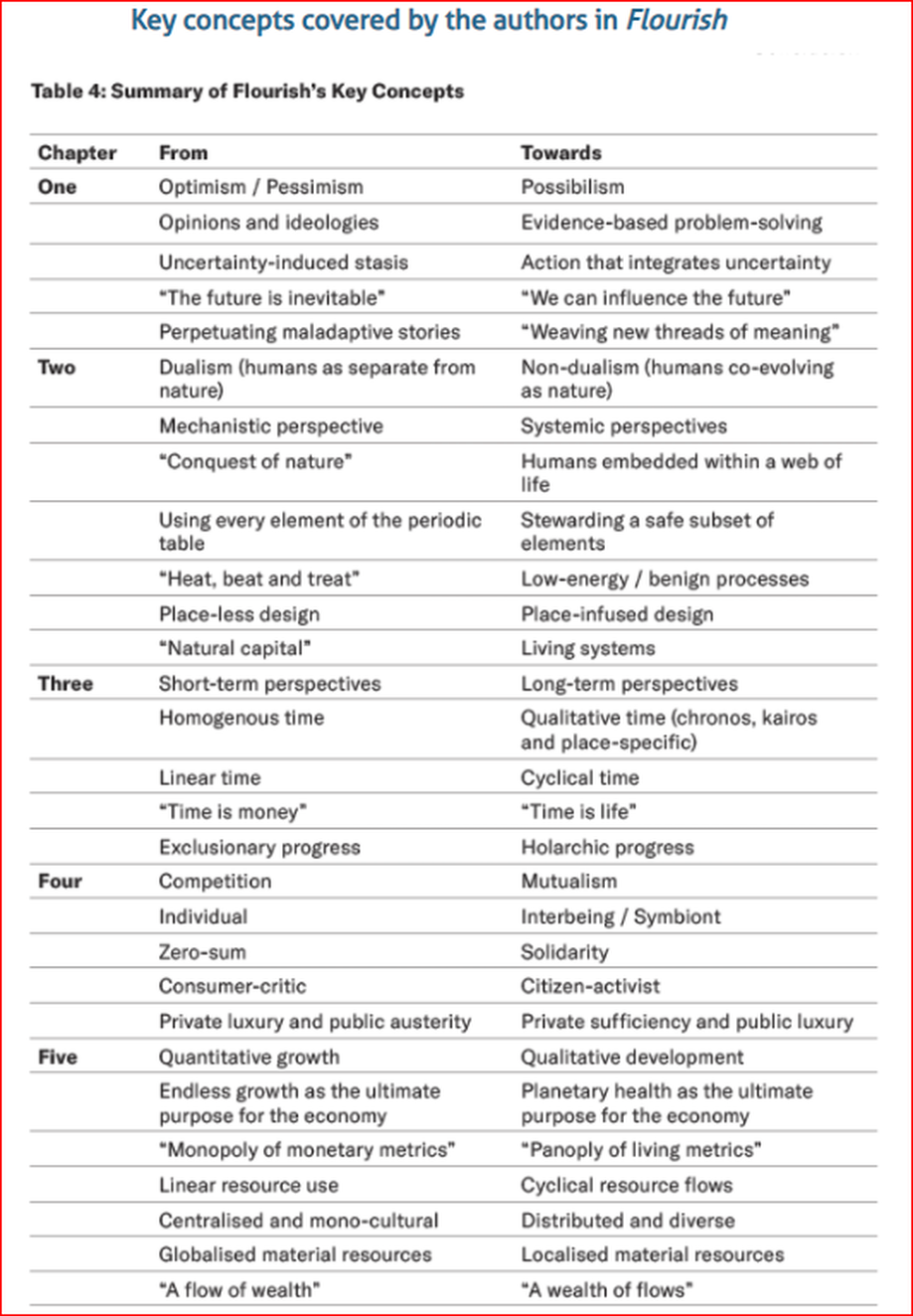 ​​Interview with the Authors

"What will it take to restore balance to our world for future generations’ survival? The focus on sustainable design has led to a great deal of positive change in our shared built environment, but for two visionary systems change thinkers, it’s now time to embrace a radical, regenerative design approach for a truly flourishing future. Michael Pawlyn, founder of the innovative biomimicry architecture firm Exploration, has joined forces with Sarah Ichioka, urbanist and leader of multi-disciplinary strategic consultancy firm Desire Lines, on a new book which maps out key design paradigms in a time of planetary emergency. They argue that as a globalized society, we urgently need to reach the turning point in human civilization where everything we do not only doesn’t cause harm, but actually has a net positive impact on the environment. By embracing approaches that restore ecosystems, reunite divided communities, and reciprocally enhance the interdependent health of people, place and planet, their approach to the built environment may be just what the planet needs."

​Podcasts for the Book

Flourish: Design Paradigms for a Planetary Emergency
​
A Process Appreciation

The philosopher Whitehead once said that the aim of all living beings is to live, to live well, and to live better.  The word “flourishing” captures the spirit of living well and better.   It invites us to imagine and live into a kind of community that is, in fact, better than the kind to which we are accustomed.

​The authors of Flourish, Ichioka and Pawlyn, remind us that, in order to move toward these ways of being together, we need worldviews, mindsets, and paradigms that are conducive to such movement.  One virtue of the book is that they draw from so many sources that can help inspire and articulate alternative, "flourishing" worldviews.

We in the process community believe that a process-relational worldview can also help by affirming and perhaps also integrating many of the sources cited in Flourish.  Here it is in a nutshell:
​
Process philosophers and theologians propose that a worldview such as that offered above, can help people around the world live from four aspirational hopes or aims, which are themselves in process and, at their best, context-nourished and place-based in their approximations.  Here they are:
​
​​
Flourish speaks specifically to three of these four aims: whole communities, a whole planet, and holistic thinking.  It does not focus as much on the first hope - whole persons - but the spirit of the book points toward this hope, too.

​If we consider the hope for "whole persons," two questions emerge: (1) What is a whole person or, to say the same thing, a flourishing person?  Here, inspired by the thought of one process thinker, Bernard Loomer, the process movement offers an image, a springboard for reflection.  It is by no means a final image, nor does it apply to everyone's situation.  But it does inspire further thought at a personal level.  (2)  And what kinds of personal "qualities of heart and mind," indeed spiritual qualities, might we embody in our own lives, if in fact we are flourishing. embody?  Here, inspired by the work of Spirituality and Practice, the process movement offers an alphabet of traits which, taken together, offer an image of the flourishing soul.  These traits are among those that can be animated by religious traditions, ritual practices, and various forms of prayer and meditation.  Like the six characteristics of a flourishing soul, they are springboards for thought, not final anwers.
However, a flourishing soul, thus described, is but one of four aims.  Process philosophy emphasizes that a flourishing soul cannot exist without a flourishing community and a flourishing planet, both of which are partially reliant on forms of holistic thinking such as those identified in Flourish: Design Paradigms for a Planetary Emergency.  And process philosophy likewise emphasizes that, to whatever degree we partake of flourishing selfhood, we are inwardly drawn, by the very Beauty which inspires the universe, to be fully committed to flourishing communities and a flourishing planet.  One of the many values of Flourish is that it shows how many resources are now available for holistic thinking.  To their list let us add Process Philosophy.