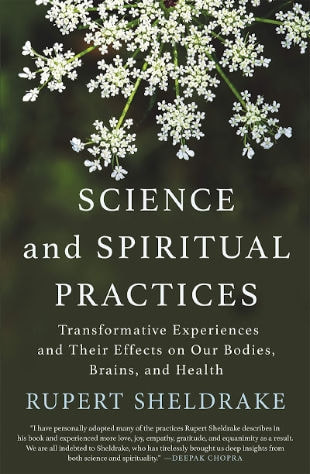 Demonstrating the same respect for science and religion in this new book, Sheldrake focuses on seven spiritual practices:He points out that all of these practices are open to people of any religious tradition or no tradition, including humanists, agnostics, and atheists. They build community and are practical, helpful, and healing in everyday life. Many scientific studies have confirmed their benefits for physical and mental health.
Sheldrake is especially interested in practices that help people connect with the more-than-human world (see excerpt) that scientists regularly explore and explicate. Each chapter ends with two suggested ways for you to have a direct experience with these practices.

​Connecting with Nature through Science
​

"One of the areas in which religious people can learn from the nonreligious is in connecting with the more-than-human world in new ways opened up by science. Even the most atheistic scientists form a relationship with the natural world through their investigation of it, however specialized their field of study. Many religious people lack this sense of connection with the details of nature, and some seem impatient to soar beyond them.

"This is an area with a huge potential for spiritual exploration. The natural sciences have unveiled a universe far larger, older, and stranger than anything previously imagined. They have revealed details about biological life that no one knew before, including the existence of realms of microorganisms around us, and also within us: the vast community of microbes that lives in our guts. The sciences have penetrated into realms of the very large and the very small which our ancestors knew nothing about. The trouble is that the sciences give us vast amounts of data, but it is devoid of personal or spiritual meaning.
​
"By contrast, traditional spiritual connections with the more-than-human world found meaning and significance everywhere, but knew nothing of these recent discoveries of the sciences. To combine these two approaches is a uniquely modern challenge."

​- reposted from Spirituality and Practice

No Need to Articulate Beliefs and Doubts
​

...people can learn spiritual practices and practice them without having to start by articulating their beliefs or doubts. Their practices can lead to a deeper understanding, but direct experience comes first. The same principles apply to all the practices I discuss in this book. All of them are open to Christians, Jews, Muslims, Hindus, Buddhists, animists, neo-shamans, people who are spiritual but not religious, New Agers, secular humanists, agnostics, and atheists. I myself am a Christian—an Anglican—and I take part in these practices in a Christian context. But all of them are practiced by followers of other religions, and also by atheists and agnostics. No religion or nonreligion has a monopoly on these practices. They are open to everyone.

​Over the last thirty-five years I have been doing experimental research on plant growth, morphic resonance, homing pigeons, dogs that know when their owners are coming home, the sense of being stared at, telephone telepathy, and a range of other subjects. From 2005 to 2010, I was the director of the Perrott-Warrick Project for research into unexplained human and animal abilities, funded by Trinity College, Cambridge. The results of this research have convinced me that our minds extend far beyond our brains, as do the minds of other animals. For example, there seem to be direct telepathic influences from animals to other animals, from humans to other humans, from humans to animals, and from animals to humans. Telepathic connections usually occur between people and animals that are emotionally bonded.

Such psychic phenomena are normal, not paranormal; they are natural, not supernatural. They are part of the way that minds and social bonds work. They are sometimes called “paranormal” because they do not fit into a narrow understanding of reality. But the phenomena themselves can be studied scientifically, and they have measurable effects. They are about interactions between living organisms, and between living organisms and their environment.