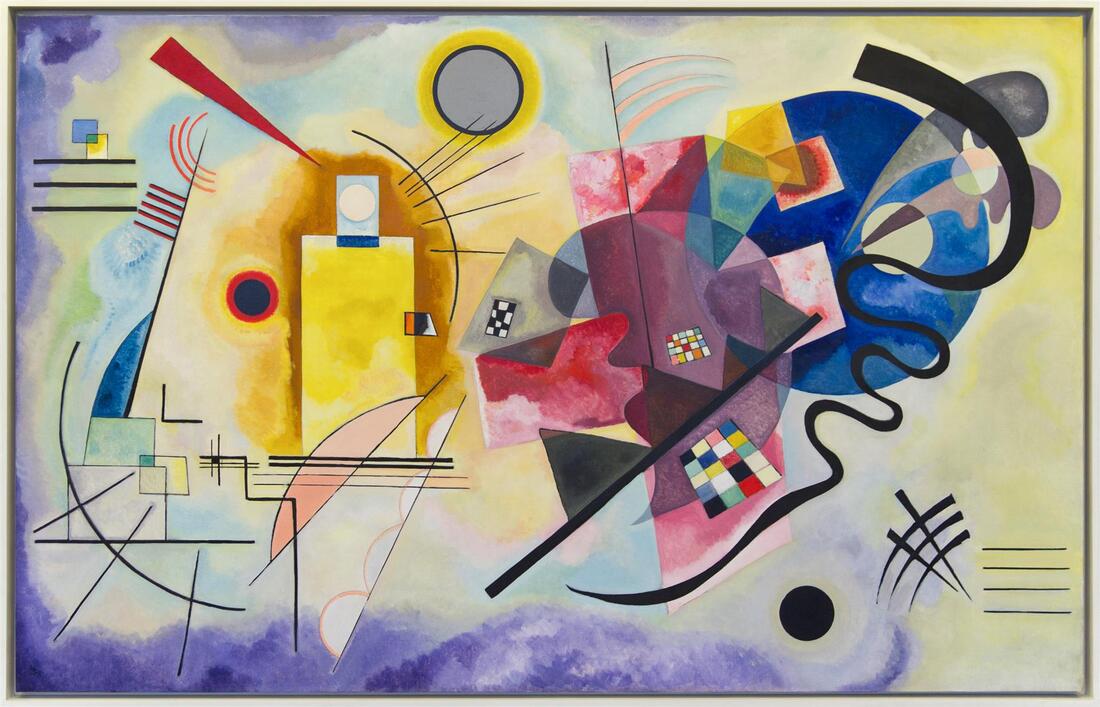 Whitehead's philosophy comes alive when presented in colors. The early German expressionist, Wassily Kandinsky, saw colors as events, and he saw music as a pure form of event-expression. He sought to separate colors from mere representation and present them in their vibrancy, as events in their own right, like music. For him, spirituality begins and ends when we can see all things, colors much included, in event-like terms. Colors are what events look like, and music is what events sound like. Sure sounds like Whitehead. This page is an invitation to consider parallels between Whitehead and Kandinsky, adding some of your own.

Wassily Kandinsky was a Russian painter and art theorist. He is credited with painting one of the first purely abstract works. Kandinsky was a pioneer of abstract art and a leading member of the Blue Rider (Der Blaue Reiter) movement. He was born in Moscow in 1866 and died in Neuilly-sur-Seine, France in 1944. His work is an important part of the history of modern art and has many links with Whitehead.

Kandinsky's desire to separate color from representation, and to show how color itself expresses spiritual values, parallels Whitehead's idea that color is a visual embodiment of what Whitehead called "subjective forms" or emotions. Subjective forms are one of the eight categories of existence that Whitehead highlights in his magnum opus, Process and Reality. Such forms are objective in the sense that they are a real part of the world, and yet their objectivity is subjective, pertaining to the qualities of feeling. They are subjective forms.

Kandinsky's sense that colors are alive with feeling, and thus musical in nature, parallels Whitehead's idea that the whole of the universe consists of events with subjectivity, not static 'things' or, in Whitehead's phrase, "vacuous actualities." Various process philosophers argue that Whitehead's philosophy is best understood in sonic metaphors. Whitehead presents a musical view of reality.

For Whitehead as for Kandinsky, aesthetic value lies in discerning or sensing the aliveness, the vibrancy, of the world: in seeing, to use the language of David Ray Griffin, the pan-experiential nature of reality. If we imagine pan-experientialism in visual form, and further imagine how it might be presented through colors, we have Kandinsky as an example. He paints the colors of pan-experientialism.

In Whitehead's philosophy, even the mind of the universe, even God, carries within its heart pure potentialities for objective spatial relations (eternal objects of the objective species) and for subjective form and feeling (eternal objects of the subjective species). From this point of view, Kandinsky's can help us see into the very mind of God and realize that God is, after all, musical. The vibrancy of pure potentialities, the way they beckon the heart and mind, are one way that God is in the world even as more than the world. This vibrancy is also one way that the world is in God and also more than God. Color itself is where God and the world meet; it is within God and within the world.

Green and other Colors
as Qualities of Emotion

The primitive form of physical experience is emotional— blind emotion— received as felt elsewhere in another occasion and conformally appropriated as a subjective passion. In the language appropriate to the higher stages of experience, the primitive element is sympathy, that is, feeling the feeling in another and feeling conformally with another. We are so used to considering the high abstraction, ‘the stone as green,’ that we have difficulty in eliciting into consciousness the notion of ‘green’ as the qualifying character of an emotion. Yet, the aesthetic feelings, whereby there is pictorial art, are nothing else than products of the contrasts latent in a variety of colours qualifying emotion, contrasts which are made possible by their patterned relevance to each other. The separation of the emotional experience from the presentational intuition is a high abstraction of thought. Thus the primitive experience is emotional feeling,† felt in its relevance to a world beyond.

​"One of the two pioneering movements of German Expressionism, Der Blaue Reiter began in Munich as an abstract counterpart to Die Brücke's distorted figurative style. While both confronted feelings of alienation within an increasingly modernizing world, Der Blaue Reiter sought to transcend the mundane by pursuing the spiritual value of art. Wassily Kandinsky, Franz Marc, Gabriele Münter were the theoretical centers of the group, which included a number of Russian immigrants and native Germans. This internationalism led the group to mount several traveling exhibitions during their brief tenure, making them an indispensable force in the promotion of early avant-garde painting.

“The true work of art is born from the ‘artist’: a mysterious, enigmatic, and mystical creation. It detaches itself from him, it acquires an autonomous life, becomes a personality, an independent subject, animated with a spiritual breath, the living subject of a real existence of being.”

―Wassily Kandinsky
He wanted a kind of painting in which colours, lines, and shapes, freed from the distracting business of depicting recognizable objects, might evolve into a visual “language” capable—as was, for him, the abstract “language” of music-- of expressing general ideas and evoking deep emotions.

- Encyclopedia Britannica, on Kandinsky
For the artist, music and color were two components of art closely intertwined with one another, serving as the basis of the emotional response to art, often joined together in the form of synesthesia, the activation of one sense as the result of experiencing another. Both produce a harmony that influences the soul. The idea of music appears all over Kandinsky’s oeuvre, as he believed that shades resonating with each other produce visual “chords.”

Hearing tones and chords as he painted, Kandinsky theorised that (for example), yellow is the colour of middle C on a brassy trumpet; black is the colour of closure, and the end of things; and that combinations of colours produce vibrational frequencies, akin to chords played on a piano. In 1871 the young Kandinsky learned to play the piano and cello.

Seeing Colors as Sounds,
​Living in a Musical World

more reflections on Whitehead and Kandinsky

​"Synaesthesia can connect any two sensory experiences you care to name (and many you can’t). Some of the most common include seeing coloured letters or numbers (grapheme-colour synaesthesia), seeing colours when you hear sounds or music (chromaesthesia), and tasting words (lexical-gustatory synaesthesia).

There are over 70 types of synaesthesia, which cause associations between different types of sensory input, but what they all have in common is that the associations are involuntary, present from early childhood, and remain consistent throughout life. It is thought that synaesthesia is caused by extra connectivity between sensory regions of the brain, so stimulation of one sense cross-activates the other. (BBC)
​Synaesthesia can be confusing, distracting, and interesting to a synaesthete. There is no need to romanticize it. And yet it also has ontological significance. It is a revelation of the fact that we live in an entangled universe where things are coupled or linked with other things in what Whitehead calls contrasts. Contrasts are the togetherness of disparate items. Synaesthesia is the experience of lived contrasts among sensory modes.

This does not mean that the particular entanglements found in a moment of synaesthesia are replications of entanglements in the actual world.  Yellow might not be the color of Middle C. It means synaesthetic moments are windows into the togetherness of all things: sounds and color, for example.

​The particular kind of synaesthesia that so interested Kandinsky is chromaesthesia: seeing colors as sounds or music. It has special significance in a Whiteheadian context. Whitehead offers what might be called a chromaesthetic cosmology, where sights and sounds emerge from an underlying dynamism he calls creativity.

Whitehead pictures the whole of the universe as feeling. There is something like feeling all the way into the depths of matter and all the way out into the far reaches of the universe. This means that the things we see with our eyes - colors, for example - are expressions of feeling in visual form. Colors are what feelings look like.

To say that the world is music-like not mean that the world is always pretty.  Witness the violence and greed and despair.  Witness the loss of life and the absence of love.  There is too much unspeakable suffering, and too much missed potential, to say that the world is an ode to joy.  Nevertheless, the world is music-like in that it is a fluid and evolving process composed of events that come into existence and then pass away, like musical notes of varying durations in an ongoing concert.  Mountains are events, rivers are events, and people are events.  Some events last longer than others but all arise and then perish.  And each event is a blending of influences from other sources.  It is an act of creative inter-becoming. In its creativity each event transcends the strict determinism of the past.  It displays what the Chinese call a continuous creativity – a qi – which is always here and now, always spontaneous, and always expressing itself in the sheer as-it-is-ness of whatever is.

Kandinky's paintings evoke a sense of the musicality of the universe; its "creative advance into novelty," as Whitehead puts it. His colors manifest qi. At a certain stage in Kandinsky's painting career, he sought to divorce colors from representation so that they might shine on their own, showing their own essences, their own feelings. He may or may not have been right about the feelings that shine forth in particular colors. But he was certainly right about the shining.

What is it that shines? It is the vitality, the feeling. Kandinsky paints the feeling. He brings Whitehead to life. 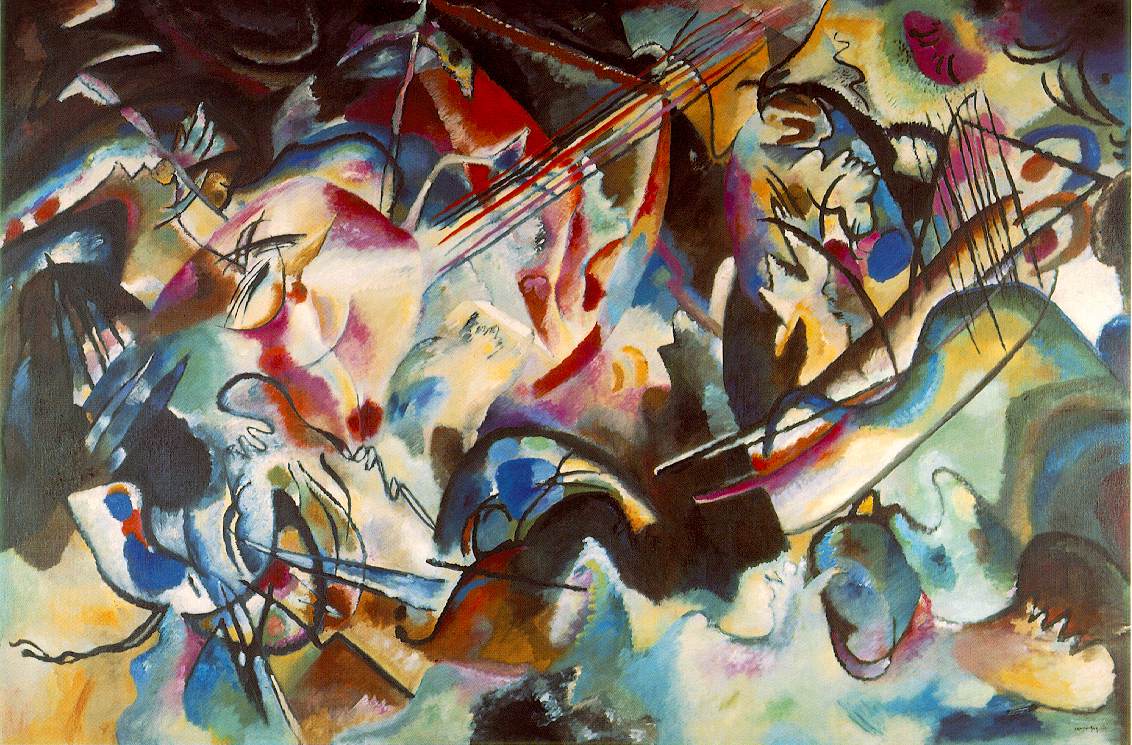 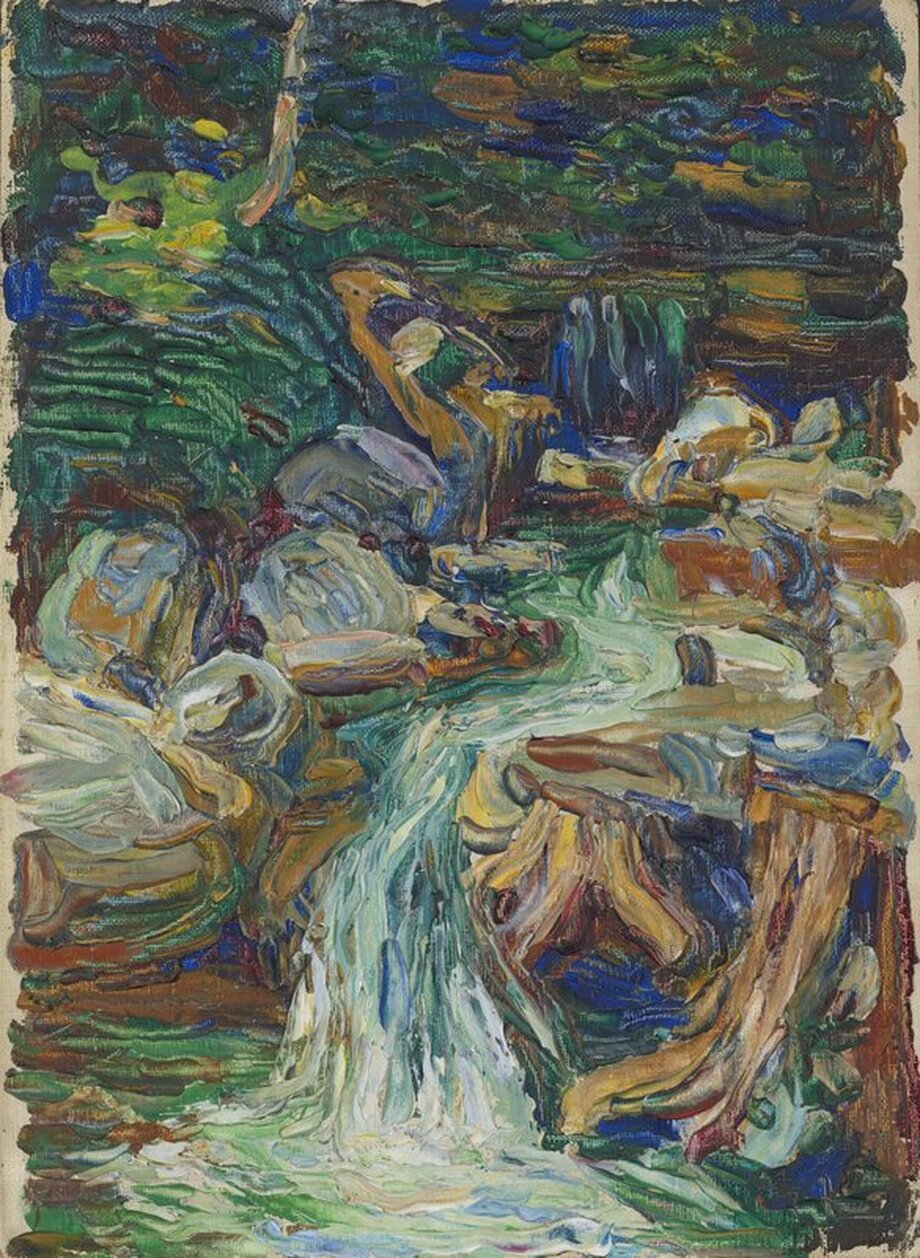 "Synaesthesia is a perceptual phenomenon where stimulation of one sense triggers experiences in another sense. For example, a synaesthete might see colours when music plays, or taste flavours when they speak different words. The word synaesthesia originates from the Greek words ‘syn’ for union and ‘aesthesis’ for sensation, literally translating to ‘a union of the senses’.

Synaesthesia can connect any two sensory experiences you care to name (and many you can’t). Some of the most common include seeing coloured letters or numbers (grapheme-colour synaesthesia), seeing colours when you hear sounds or music (chromaesthesia), and tasting words (lexical-gustatory synaesthesia).

There are over 70 types of synaesthesia, which cause associations between different types of sensory input, but what they all have in common is that the associations are involuntary, present from early childhood, and remain consistent throughout life. It is thought that synaesthesia is caused by extra connectivity between sensory regions of the brain, so stimulation of one sense cross-activates the other.
​
In the 1990s, sound-colour synaesthetes were blindfolded and put into an fMRI scanner. They displayed activity in visual regions of the brain when sounds were played, a pattern not seen in non-synaesthetes. We now know that white matter, which connects different brain regions, is organised differently in synaesthetes’ brains, and they have more grey matter in regions responsible for perception and attention."