from the Harvard Pluralism Project
​

Download File
"Hindus have long worshipped at wayside shrines, beneath the canopy of a tree or beside the waters of a pool. In about the 4th century, however, they also began to build permanent and magnificent temples of stone. These temples are laid out according to precise mathematical dimensions and proportions and erected to be the symbolic dwelling of the Divine on earth. The image of the deity for whom the temple is built is housed in a smaller sanctuary or “womb-chamber” (garbha griha) at the very heart of the temple.
​
Of course, Hindus will say that the Divine is everywhere, like the light of the sun. But the sun will not kindle a piece of paper lying on the earth. Only when a lens is used to concentrate and its power is refracted will the paper burst into flame. So it is that the temples and images of a deity focus and concentrate the presence of God. There are special texts or shastras used by ritual architects and artists to create the space suitable for the embodiment of the Gods...."

Can the God of whom open and relational theologies
speak be experienced and known as a god or goddess?

I am a Hindu with special affection for the mother-goddess Durga.  I believe that the divine is everywhere, including in gods and goddesses.  For me, the gods and goddesses are not just abstract ideas.  They are living images in my mind; and they have a certain kind of agency, not unlike the way in which a character in a movie has agency, or a remembered ancestor (your great grandmother, for example) has agency.  When you think of your great-grandmother, she feels present in her way.  And so, for me, do the gods and goddesses.  They are ambassadors of the divine and lenses through which holy light shines.

In the view of process theolology, can an invisible spirit, Durga, for example, visibilize herself in a statue, such that, when we are in the presence of the statue, and gaze into her eyes, we are, in that moment, seen by her.  And might she be the very God in whom we live and move and have our being, such that, in that moment, we are touched by the very God in whom we place our deepest trust?  And can it be the case that, after this happens, she withdraws from the statue, and that the statue is disposed of, which means that it is “disposable clay.”

I hope so.  In my view, She herself is not disposed of; she continues to exist in her way, available for worship.  And she will visibilize herself again at another time, another festival.  In your view, Is the universe majestic enough, enchanted enough, that it can include Her?

​UNESCO: Representative List of the Intangible Cultural Heritage of Humanity - 2021 URL: https://ich.unesco.org/en/RL/00703 Description: Durga Puja is an annual festival celebrated in the fall in India and Bangladesh. It marks the ten-day worship of the Hindu mother-goddess Durga. Characterized by Bengali drumming, large-scale installations and clay sculptures made from unfired clay from the Ganga River, the festival has come to signify ‘home-coming’ or a seasonal return to one’s roots. During the event, the divides of class, religion and ethnicities collapse as crowds of spectators walk around to admire the installations. Durga Puja is transmitted by families, art centres and traditional media, among others. Country(ies): India © 2011 by Meghdut Rudra and Ramprashad Gain Duration: 00:09:14

A brief but poignant overview of the importance
of this spiritual practice in India. 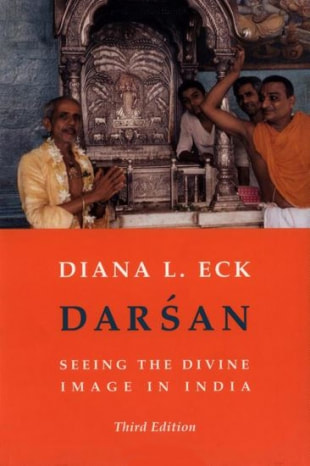 For Jews, Christians, and Muslims, hearing the word of God and responding to it is all-important. In Hinduism, the emphasis is upon the visual — seeing the divine image. Diana L. Eck, Professor of Comparative Religion and Indian Studies at Harvard University and author of Encountering God: A Spiritual Journey from Bozeman to Banaras, has written an illuminating paperback about darsan, the single most common and significant element of Hindu worship. It means religious seeing or the visual perception of the sacred.
​
In this polytheistic religion, Eck notes, "not only must the gods keep their eyes open, but so must we, in order to make contact with them, to reap their blessings, and to know their secrets." The author explores the "aniconic" embodiments of divinity in stones, earth mounds, and other aspects of nature including the Ganges River and the Himalayas. She also examines the meaning of the "iconic" images of Siva, Krsna, Durga, Ganesa, and Visnu that are evident everywhere in Indian life and culture.
​
One of the most interesting chapters in the book discusses the treatment of gods and goddesses in the home as divine guests who elicit the spiritual practices of reverence, nurturing, and devotion. Darsan is also part and parcel of temple worship, pilgrimage, festival celebrations, and the honoring of saints and sadhus. This brief but poignant overview of the importance of seeing the divine image in India is a gem.

"A common sight in India is a crowd of people gathered in the courtyard of a temple or at a doorway of a streetside shrine for the darsan of the deity. Darsan means 'seeing.' In the Hindu ritual tradition it refers especially to religious seeing, or the visual perception of the sacred. When Hindus go to a temple, they do not commonly say, 'I am going to worship,' but rather, 'I am going for darsan.' They go to 'see' the image of the deity — be it Krsna or Durga, Siva or Visnu — present in the sanctum of the temple, and they go especially at those times of day when the image is most beautifully adorned with fresh flowers and when the curtain is drawn back so that the image is fully visible. The central act of Hindu worship, from the point of view of the lay person, is to stand in the presence of the deity and to behold the image with one's own eyes, to see and be seen by the deity. Darsan is sometimes translated as the 'auspicious sight' of the divine, and its importance in the Hindu ritual complex reminds us that for Hindus 'worship' is not only a matter of prayers and offerings and the devotional disposition of the heart. Since, in the Hindu understanding, the deity is present in the image, the visual apprehension of the image is charged with religious meaning. Beholding the image is an act of worship, and through the eyes one gains the blessings of the divine.

"Similarly, when Hindus travel on pilgrimage, as they do by the millions each month of the year, it is for the darsan of the place of pilgrimage or for the darsan of its famous deities. They travel to Siva's sacred city of Banaras for the darsan of the Lord Visvanath. They trek high into the Himalayas for the darsan of Visnu at Badrinath. Or they climb to the top of a hill in their own district for the darsan of a well-known local goddess. The pilgrims who take to the road on foot, or who crowd into buses and trains, are not merely sightseers, but 'sacred sightseers' whose interest is not in the picturesque place, but in the powerful place where darsan may be had. These powerful places are called tirthas (sacred 'fords' or 'crossings'), dhams (divine 'abodes'), or pithas (sacred 'benches' or 'seats' of the divine). There are thousands of such places in India. Some, like Banaras (Varanasi), which is also called Kasi, are sought by pilgrims from their immediate locales.

"Often such places of pilgrimage are famous for particular divine images, and so it is for the darsan of the image that pilgrims come. The close relationship between the symbolic importance of the image and the symbolic act of pilgrimage has been explored in a Western context by Victor and Edith Turner in Image and Pilgrimage in Christian Culture. In the West, of course, such traditions of pilgrimage were often attacked by those who did not 'see' the symbolic significance of images and who, like Erasmus, denounced the undertaking of pilgrimages as a waste of time. In the Hindu tradition, however, there has never been the confusion of 'image' with 'idol,' and in India, pilgrimage is the natural extension of the desire for the darsan of the divine image, which is at the heart of all temple worship.

"It is not only for the darsan of renowned images that Hindus have traveled as pilgrims. They also seek the darsan of the places themselves which are said to be the natural epiphanies of the divine: the peaks of the Himalayas, which are said to be the abode of the gods; the river Ganga, which is said to fall from heaven to earth; or the many places which are associated with the mythic deeds of gods and goddesses, heroes and saints.

"In addition to the darsan of temple images and sacred places, Hindus also value the darsan of holy persons, such as sants ('saints'), sadhus ('holy men'),and sannyasins ('renouncers'). When Mahatma Gandhi traveled through India, tens of thousands of people would gather wherever he stopped in order to 'take his darsan.' Even if he did not stop, they would throng the train stations for a passing glimpse of the Mahatma in his compartment. Similarly, when Swami Karpatri, a well-known sannyasin who is also a writer and political leader, would come to Varanasi to spend the rainy season 'retreat' period, people would flock to his daily lectures not only to hear him, but to see him. However, even an ordinary sannyasin or sadhu is held in esteem in traditional Hindu culture. He is a living symbol of the value placed upon renunciation, and he is a perpetual pilgrim who has left home and family for a homeless life. Villagers are eager for the darsan of such a person, approaching him with reverence and giving him food and hospitality. In The Ochre Robe, Agehanada Bharati writes, 'There is absolutely no parallel to the conception of darsan in any religious act in the West . . .'
​
"In popular terminology, Hindus say that the deity or the sadhu 'gives darsan ' (darsan dena is the Hindi expression), and the people 'take darsan' (darsan lena). What does this mean? What is given and what is taken? The very expression is arresting, for 'seeing' in this religious sense is not an act which is initiated by the worshiper. Rather, the deity presents itself to be seen in its image, or the sadhu gives himself to be seen by the villagers. And the people 'receive' their darsan. One might say that this 'sacred perception,' which is the ability truly to see the divine image, is given to the devotee, just as Arjuna is given the eyes with which to see Krsna in the theophany described in the Bhagavad Gita."
Open Horizons