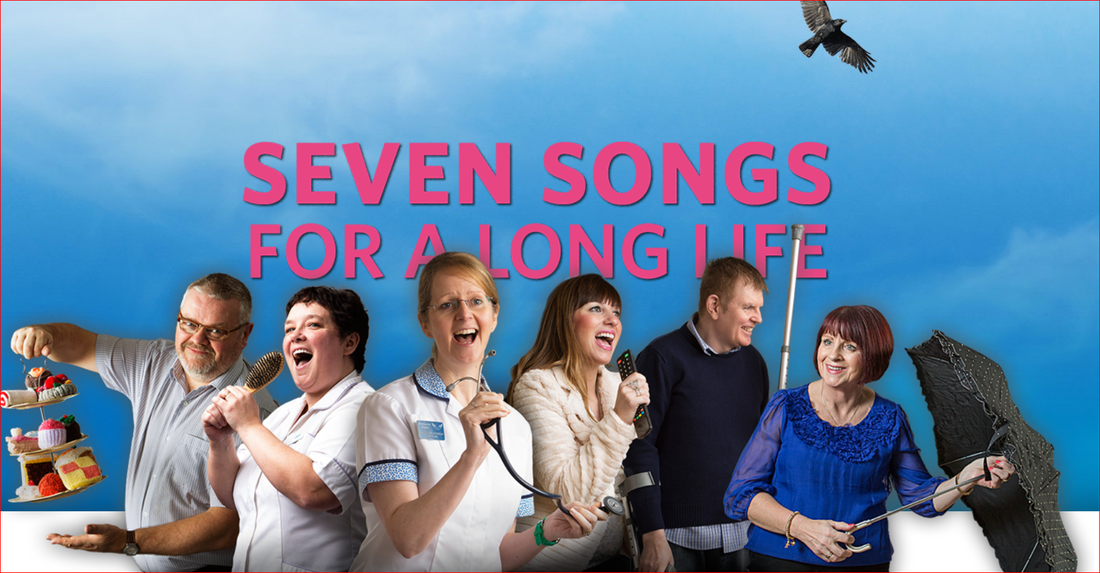 ​Seven Songs for a Long Life

​​
The doctors, nurses, and other staff who work at Strathcarron hospice in Scotland are willing to try anything to meet the needs of their dying patients and their loved ones. The emphasis is upon care that is compassionate and sensitive to the fact that many of the patients are in pain and also dealing with the sobering impact of their impermanence.
Nicola was diagnosed with cancer six years ago and suffers from constant pain that diminishes her will to do much. Iain, a former cycling champion, suffers from the increasing debilitation of multiple sclerosis and has been worn down by the friends who have abandoned him since his diagnosis.

The head nurse named Mandy taps into the healing balm of music. It becomes a key to healing and the creation of community. She explains that in Scotland, music is "a very social . . . part of culture. It is one of the last things to deteriorate." Witness the lively rendition of Frank Sinatra's "I Left My Heart in San Francisco" performed with good cheer by Tosh. Not long after singing this classic, he died unexpectedly. Other hospice patients are busy trying to create good memories for their children by singing with them.
​
Mandy believes that it is not the place of the hospice staff to fix people but to be with them in deep listening and patience. These qualities come to life on the screen as the staff and patients celebrate when one woman's cancer goes into remission and a couple gets married.

Amy Hardie directs this heart-affecting documentary. We were touched by the magical ways in which the singing of songs such as "Wouldn't It Be Loverly" and "Dream A Little Dream of Me" tap into the memories of both those singing and those listening. And then as a special treat, Hardie gives us a closing taste of the beauty and bounty of singing. Mandy and Nicola sing a mesmerizing duet of R.E.M.'s "Everybody Hurts." Its lyrics have great relevance to the ample messages of Seven Songs for a Long Life:

"Sometimes everything is wrong
Now it's time to sing along
When your day is night alone (hold on)
(Hold on) if you feel like letting go (hold on)
If you think you've had too much
Of this life
Well, hold on

​
“Sanders developed a program for care of the dying based on three key principles: pain control, family and community involvement, and engagement with the dying person’s spiritual needs…While the first two of Saunders’ principles have been well-studied, the third, engagement with the dying person’s most deeply rooted spirituality, has been largely ignored in recent years.”   So write the authors Spirituality in Palliative Hospice Care (Bramadat, Coward, & Stajduhar, 2013).

Spirituality is the act of being awake, aware, and well (even at the end of life)

First, it offers a way of distinguishing the spiritual side of a person’s life from questions of theology and religious affiliation.  The spiritual side of life is that aspect of a person’s mind and heart which seeks to be awake, aware, and alive in any and every stage of life, whatever the conditions, including the process of dying.  David Steindl-Rast: “Sometimes people get the mistaken notion that spirituality is a separate department of life, the penthouse of our existence.  But rightly understood, it is a vital awareness that pervades all realms of our being.  Someone will say, “I come alive when I listen to music,” or “I come to lie when I garden, or “I come alive when I play golf.”   Wherever we come alive, that is the area in which we are spiritual.  And then we can say: “I know at least how one is spiritual in that area.” To be vital, awake, aware, in all areas of our lives is the task that is never accomplished, but it remains the goal."  However and importantly, spiritual aliveness need not be conscious or self-conscious in order to be significant in a person's life. Much if not most of our "spirituality" is pre-reflective and pre-verbal.  We human beings are much more than our conscious experience, important as that is. A person who is dying has a spiritual side even as she may be consciously unaware of it.  It is as important to be sensitive to what is implicit but unsaid: the desire to be satisfied in the moment at hand.

Total pain is an obstacle to spirituality.
Palliative care can be an important part of hospice care.

Second, palliative care and hospice care can work together.  Dame Cicely Saunders defined total pain as the suffering that encompasses all of a person's physical, psychological, social, spiritual and practical struggles.  Palliative care, including the use of medicine, can reduce pain and help a dying person claim the spiritual side of her life.  The reduction of suffering and pain is a doorway into whatever forms of spiritual aliveness are available to a person.

Interfaith hospice workers need to understand the many moods of spirituality.
They should know the spiritual alphabet.

Third, open and relational theology recognizes that each person’s life is itself a process of becoming, that this process unfolds over time, and that healthy living – indeed healthy spirituality – will look different at different moment’s in a person’s life.  At a certain age “spirituality” or full aliveness may take the form of enthusiasm for life, whereas while dying it may take the form of “gratitude” for having been alive and the enjoyment of “connectedness” with friends and family.  Frederic and Mary Ann Brussat have created a “spiritual alphabet” which includes one mood, emotion, or ability per letter in the alphabet, and in some instances two: attention, beauty, being present, compassion, connection, devotion, enthusiasm, faith, forgiveness, grace, gratitude, hope, hospitality, imagination, joy, justice, kindness, listening, love, meaning, nurturing, openness, peace, play, questing, reverence, shadow, silence, teachers, transformation, unity, vision, wonder, the X-factor (otherwise called mystery, yearning, you, and zeal. The hospice worker can and should be sensitive to these various moods.

All persons have a spark of inner wellness, a side of their lives that seeks to be well.
There is a spirit of creative transformation at work in the world at work in this inner spark.

Fourth, open and relational (process) theology proposes that there is indeed a spirit of healing, wholeness, and creative transformation at work in a person’s life as he or she is dying, whether recognized or not by that person.  This living spirit is God’s breathing.  It is not all-powerful, it does not cause the dying; but it is real and ever-present.  Moreover, it is omni-adaptive, in that it adjusts to each new circumstance in a person’s life through the provision of what process thinkers call “initial aims” or fresh possibilities for responding to existing circumstances in satisfying ways.  These initial aims are possibilities for being alive in the circumstances at hand.  The calling of the hospice worker is to be a vessel for this possibility, to help us discern the best for the situation at hand.  She does so through palliative care

Hospice care is itself a spiritual practice: the practice of compassion and connectedness.
It begins and sustains itself through listening: feeling the feelings of others.

Fifth, open and relational (process) theology proposes that we humans can feel the feelings of others in direct ways and empathically imagine ourselves inside the lives of others.  We are already connected to one another in unconscious ways; active listening can help us become aware of these connections.   In moments when we are truly present to those at the end of life, we are embodying a form of spirituality essential to the well-being of life.  Hospice care is a spiritual practice. These are but four of many ways in which open and relational (process) theology can assist hospice are.  The points made above are four ideas that can empower interfaith hospice care, when complemented by spiritual literacy of the sort developed by Frederic and Mary Ann Brussat and a wide range of practices developed by hospice care workers over the past six decades.
Open Horizons