The Atheism of Generation Z


​Springboards for Reflection on the Atheism of Generation Z, ​
​Panentheism, and the idea that a Viable Agnosticism can
include Soft Theism and Generous Non-Theism

​Overly Robust Atheism: Certainty that no God exists of any sort,
and that people who believe in God are utterly deceived,
prone to conceptual violence, and bad for the world.

Overly Robust Theism: Certainty that God is powerful and real,
that God is preoccupied with matters of reward and punishment,
and that God, like an imperial ruler, loves to be flattered.

Generously Soft Theism: Trusting in a non-coercive God of love
who embraces the universe with tender care, who is enriched by
multiplicity and diversity, and who is much more interested
in the flourishing of life than in being flattered.

Generously Soft Non-theism: Trusting in a spirit of love or goodness
that is not concretized in a divine agent. but still divine in its way,
and trying to live from its love without pretending to know more.

Spacious Agnosticism: A place of uncertainty in the heart,
open to soft theism, generous non-theism and other perspectives
​as well.  Non-coercive and imaginative.  A space of freedom.

Process Theology: A kind of soft theism, influenced but not limited
to an understanding of God developed by Alfred North Whitehead, deeply
committed the cultivation of beloved communities with ecology added.

Panentheism: the idea that the evolving universe, with its open future, unfolds
within the consciousness of an embodied mind, who loves all living beings,
and whose very body is the universe itself.  One kind of soft theism.

On Hearing the word Atheism for the first time

I can remember the first time I heard the word "atheism."  I must have been about six years old.   My parents told me the story of some friends of theirs whose son had invited a classmate over for dinner.  Their friends were about to say a prayer before dinner, and the son's classmate asked "What are you doing?"  They said that they were praying and he (the son's classmate) said something to the effect: "We don't do that at my house.  We are atheists."

When my parents told me the story, they were confused and sad, but not condemning.  They didn't know anyone who identified himself as "atheist" and I didn't either.   I think they were also a little hurt by the word, as was I.  I'm not sure whether we were hurt for ourselves or for God.  Maybe both.

The God in whom we believed was not a cosmic moralist or a distant clock-maker, but more like an invisible but present friend who was on the side of life and love.  It seemed and still seems a little ungrateful not to acknowledge this cosmic friend.  It would be like having a loving mother and denying her existence and her love.  It might hurt her feelings.

Nevertheless, my family did not believe that this cosmic friend was a punishing sort of spirit, or even that the cosmic friend was especially preoccupied with being acknowledged or receiving gratitude.  The friend was more like a cosmic Bodhisattva in Buddhism: an encircling and loving presence whose very essence is love.  Love does not need to be worshiped, but it can be more effective (so I believe) if we acknowledge it and try to cooperate with it.

Truth be told, atheism doesn't really make sense to me.  It claims too much certainty.  It seems to know, almost indubitably, that the cosmic friend is non-existent.  I am doubtful about this kind of certainty, and I'm also doubtful of certainty on the other side.  I believe and feel that there is truly a cosmic Friend at work in the world, but I am not certain.  I might be wrong.

What makes more sense is agnosticism.  In Religion and Ecology: Developing a Planetary Ethic, a former student of mine, Whitney Bauman, describes his version of agnosticism as follows:

​"Agnosticism is a valid position in many philosophies and epistemologies that suggests we can never get beyond our human perspective to know reality in full.  Historically, in theological terms, it has been a term that navigates between theism and atheism." 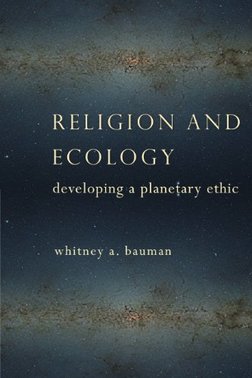 I find myself at home in the space of freedom Whitney names.  Let agnosticism name a place in the heart and mind that is free from certainty and that can, as Whitney emphasizes at the end of his book, reach out in love to others: to people, animals, and the earth.

Some agnostics believe in the cosmic Friend and some do not.  Many are somewhere in between.

One of these in-between places is generous non-theism.   Perhaps this is where Whitney is; I'm not sure.  Sometimes in his book he speaks of divine love and even, metaphorically but positively, a god of the gaps.   Still, he avoids any suggestion that this love is embodied in an agent.  He seems to associate the idea of God as agent with what he calls robust theism, and believes that such theism, in its imperialism and arrogance, leads to conceptual and physical violence through a denial of differences.   I am not clear whether or not Whitney's perspective includes soft theism, but it doesn't matter.  What I like is his agnosticism.

What makes this agnosticism spacious is that it reaches out in love to people, animals and the earth, respecting their integrity and simultaneously recognizing the way that we are all parts of one another.  This agnosticism is inwardly free in that it can partake of many loves; it is polyamorous, not only in its affection for other sentient beings (humans much included) but also its affection for places.   In this sense it is nomadic, even if it happens to reside in one location.  And yet it is also humble.  Always it reaches out from a particular historical situation, a particular embodiment in the moment at hand.  It cannot speak for all places and time, but for its place and time, in a polyamorous, nomaci way.

All agnostics know, with Whitney, that their perspective is limited, and that this force may not exist at all, except in their imaginations.  Still, they feel it and try to live by it.  And they realize, as does Whitney, that just because we "never get beyond" our human perspective doesn't mean that things are given to our experience that our beyond the human: hills, rivers, plants, animals, trees, stars, and maybe also the living presence of a divine Love.  Whitney's point is that when we think about these realities, we inevitably bring our human perspectives into the thinking.   What is given to our experience -- whether natural or ultra-natural, like divine Love (so I believe) -- is always already interpreted by we the experiencers.  And our interprerations change over time.

Back to Generation Z.  The atheists among them are far ahead of where I was when a teenager.  I was much more interested in being accepted and finding my niche among peers than thinking about whether or not God is real.  Belief in God was a default option for me, not a deliberated option.  I respect those for whom it is a deliberated option.  I am Julia's grandmother in some ways, and Julia, too.