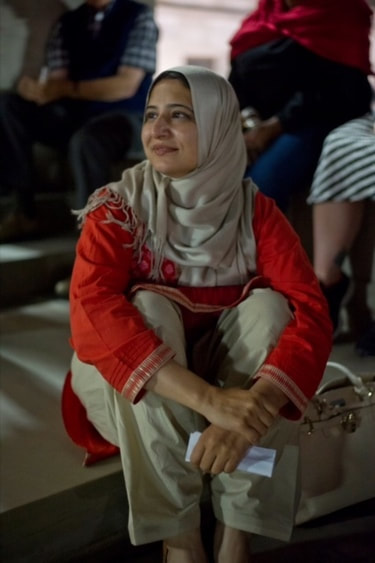 “Shocked, Numb, Dismayed.“ These were the initial feelings that my daughter in her freshman year at college, which she shared with me at 1:30 am Tuesday night.  “I am not coming back home…”  My son texted from Europe; he was away from the country for his study abroad semester. He had similar feelings.

I spent the rest of the night messaging my two smart, enthusiastic, and incredibly talented kids, helping them process the numbness, the void they felt in their world: a deep sinking hole. No one could sleep through the night.  The next day, as I learned later, they stayed in their rooms with other college students, missed classed, in utter despair.

Today, my son tried hard to convince me not to wear my hijab (headscarf) as I got ready to speak at a solidarity rally in response to the elections at the Capitol.  I understand his fear and the fear of so many others in my community, frightened that we will face prejudice and hostility due to the faith we practice.

We, just like Hispanics, African Americans, LGBTQ community, and women are worried. We are afraid of the people who work with us from nine to five, afraid of the doctors, nurses, colleagues, teachers, counselors, bus drivers, HR professionals, lawyers, realtors and all others that we deal with, wondering if they are the silent supporters of Trump, if they think we are less deserving, less intelligent, and should be treated differently. And we are angry that our colleagues, friends, and fellow citizens betrayed us by buying the rhetoric of bigotry and intolerance. Social media is full of stories of this fear and anger.

I refuse to be angry and will not give in to this fear. I have seen how fear has divided my countrymen and women. We are living in troubled times when people are being judged for the color of their skin or their belief system or their gender orientation. I know that in the past year children have been bullied in schools, women have been thrown out of Cafes, professionals have been fired from their jobs, travelers have been kicked out plans, college students have been shot in the head, and civil liberties of many have been curtailed -- only because of the faith that they practice.  And this is not the first time.  We have seen it happen to Jews, Irish, Chinese, African Americans and many other groups in the past.  But in the end, we always overcame and rose higher. This is what America is all about. What happened on 9/11 or 11/9 does not define this nation. Instead how we react to these heartrending events is what defines America.

America is not a static reality resulting from the efforts of the founding fathers, but it is a living reality that evolves and develops and improves to protect its diversity time and again. The America I believe in is not defined by one person in the White House no matter how powerful he might be, instead it is a beautiful story narrated by millions coming from different races, faiths, and backgrounds. The America I believe in is no different from our faith systems asking us to protect not only ourselves but all those who believe in its many freedoms. This is why I find solace in a spirituality that helps us heal and understand the deeper motivations for others’ actions and guides us to react in compassionate ways.

When God tells us to love the stranger for we were strangers too in the land of Egypt (Old Testament) or love the enemy and pray for the one who persecute us (NT) or be a source of mercy to all His creation whether human, animal, or environment (Quran), it is God’s way of telling us that there is a purpose to every being and a reason for each occurrence and we all have a role to play in this divine process. This election is not the end of the world but a small event in the larger scheme of things. Sometime we do not understand the processes that we are a part of, but we still have to play our part of spreading God’s love to others around us.

Even anger can be a teacher.  Our anger over the election results can be a reminder that winning is not always success and losing is not always failure. It is all about progress and there is a lot of room for that, now more than ever before.
​
For me, this election is a wake-up call to action.  It is a call to constructive actions that do not result from fear, but arise from that deep place inside us where all are safe and welcome, a place of love.  It starts with understanding those who acted out of their fears of a vanishing middle class and economic insecurities; fears of immigrants and all others who will change the face of a white America; fears that allowed divisive and poisonous public discourse of Us versus Them.

I refuse to operate from the same divisive energy of Trumpism, although cloaked in a liberal garb. I refuse to continue the dialogue along the lines of college educated versus uneducated, or progressive versus horde minded, or liberal versus prejudiced, etc. I am not frightened.
​
I am full of hope and my call of action starts from healing through understanding and doing what we should have been doing long time ago: finding common ground, taking responsibility for the marginalized, giving voice to the weak, and not staying silent in the face of oppression -- especially when it does not affect us directly. My call to action finds its strength in spiritual and manifest itself through building a beloved community; compassionate, diverse, and inclusive, with no one left behind.  This is why I join my friend, Jay McDaniel, in the statement below, which represents our shared hope that, even amid our anger, we may all find freedom from fear and, yes, freedom for love.

We Side with Love
by Sophia Said and Jay McDaniel

​Something certainly died on Nov. 8, 2016.  What died was not the country we call the United States, but rather a sense that, as a whole, Americans are for compassion, tolerance, decency, and hope for a diverse, inclusive community with no one left behind. Martin Luther King. Jr. called it beloved community.

What disappeared was not the dream itself, which some (maybe many) share; but the sense that it is collectively shared by almost all Americans.  It seems as if half of the American population abandoned it in favor of an anti-dream called Trumpism.
Trumpism is about "us" at the expense of "them" -- about the free use of hateful language -- about going back to a time when men could demean women - about a nostalgic desire to return to an imagined white dominated America of the 1950's. Trumpism masquerades as patriotism, but it is really fear and hatred.

Those who “lost” in the American election are deeply troubled by Trumpism, and also, of course, by the policies that might unfold from it, as enacted by the government.   Many are angry and frightened.   Many feel like victims or potential victims.  It’s not easy to walk on the street if you are ‘different’ from the image of ‘normal’ America carried in Trumpism.
​
Deep down, of course, they – we -- also want to resurrect the dream of beloved community.  We may sense that the resurrection can only occur through a movement of resistance, an ongoing act of protest, against Trumpism.  This does not mean that we hate those who voted for Trump, although indeed we are angry with them.  But it does mean that we know that some among those who supported Trump were not, in fact, Trumpists.  Even Donald Trump may not be a Trumpist – even he may grow beyond with help from good spiritual guidance.  We do not close the door on anybody.

But we need that guidance, too.  As we feel our anger, join the protests, take part in forms of non-violent resistance that make sense to us, we need spiritual sustenance for the long haul: sustenance that can help us avoid self-victimization, frees us from the kind of anger that burns up a soul, frees us for a spirit of generosity that extends to everyone, not just those of like mind, frees us to try to understand the deeper motivations of others, including those who are caught up in Trumpism.  There is always more to a person than fear and hatred, there is also a hope, and we need to hear that, lest we fall into the hatred we resist.
​
Where can we find the sustenance? It most easily comes by drawing from spiritual sources of the better sides of our own traditions whatever they may be: Muslim, Jewish, Christian, Buddhist, Hindu, Bahai, Jain, Pagan and otherwise.  We turn to those sides of our traditions that encourage us to be strong, to live from a deeper faith, to look at things in terms of a bigger picture, to trust in the availability of fresh possibilities.  It can also come from interfaith activity that helps us learn from other traditions.  One value of such work is that is allows us to find nourishment in many sources, trusting that if they lead to goodness, they are from the depths so important to us.

We can respond to these hard times with courage only if, in addition to constructive action and honesty to pain and anger, we also turn to the depths, at the heart of which is love.  For us and for the world, this love is healing balm.  Deep down, there is no other.


Sophia Said is program director of the Interfaith Center of Arkansas.  With a degree in developmental economics from the University of Utah and another in public policy from the Clinton School for Public Service, she has been tireless in her efforts to work for peace in Arkansas, and to promote interfaith work between Christians, Jews, Muslims and other religious denominations.  She was named Peacemaker of the Year 2015 by the Arkansas Coalition for Peace and Justice on February 13, 2016.

​Jay McDaniel is Willis Holmes Professor of Religious Studies at Hendrix College in Arkansas; the author of several books on interfaith work, including Gandhi's Hope: Learning from Other Religions as a Path to Peace; and editor of this website, which is devoted to sharing ideas conducive to a creative, socially just, ecologically sound, interfaith world.

​Said and McDaniel live in different cities but have known each other for many years. This page is a joint interfaith response to the culture of hatred and fear that has come to be called Trumpism. Said and McDaniel know that, deep down, even most Trump supporters are not really Trumpists. There is a place of peace and generosity, deep in the heart of every human being, that touches and is touched by love. Said draws from Muslim faith to say this; and McDaniel from his Christian faith. They know that people of other traditions and no tradition can say the same.

In any case they hope their words might be springboards for people of many different perspectives to find that place within the heart and live from it, each in his or her own way, reaching out to others in what Martin Luther King, Jr. calls the light of love.
Open Horizons