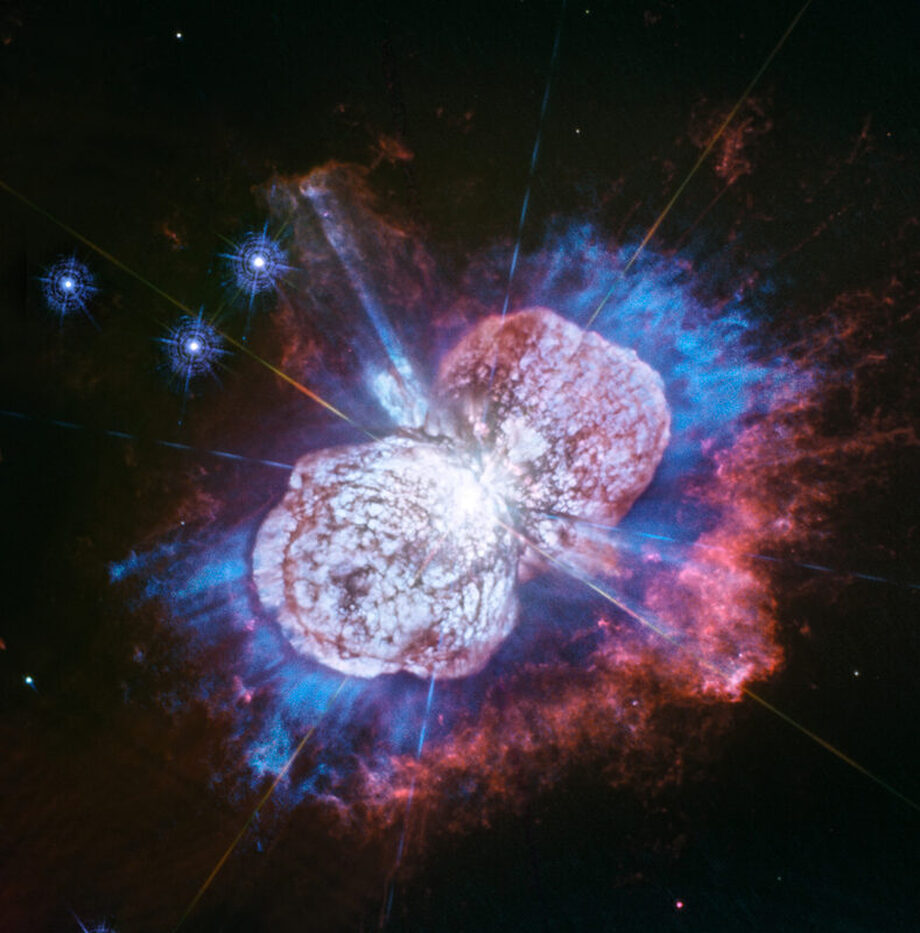 Space in Process: The Birth
​ and Death of Stars

​
The mysterious quanta of energy have made their appearance, derived, as it would seem, from the recesses of protons, or of electrons. Still worse for the concept, these quanta seem to dissolve into the vibrations of light. Also the material of the stars seems to be wasting itself in the production of the vibrations.

Stars don’t live eternally. In fact, they have interesting histories of becoming, and they die...They are the very material we are made of; what is more, they produce this material in the first place. We are—it is already a cliché—stardust, born from exploding, dying stars.


Stars don’t live eternally. They are born and then they die. We do, too. Born from their galactic explosions, we are stardust, indebted to our stellar elders, and inwardly beckoned to add our very small voice to a larger cosmic pilgrimage. This pilgrimage is mysterious, strange, sometimes violent, and very, very beautiful. To gain perspective, we best remember the larger galactic context which we live. Let us also remember the cosmic womb, divine and nourishing, in which the galaxies themselves evolve. There's no need for permanence. Buddhists are right. We must make our peace with impermanence. It is enough to add to Deep, whose wideness includes all journeys and whose nature, so we trust, is love.

​
​The Great Eruption
of a Massive Star
​
NASA
​

How Stars are Born
​

How Stars Die
​
Explanation from NASA

DEATH OF AN "ORDINARY" STAR

After a low mass star like the Sun exhausts the supply of hydrogen in its core, there is no longer any source of heat to support the core against gravity. Hydrogen burning continues in a shell around the core and the star evolves into a red giant. When the Sun becomes a red giant, its atmosphere will envelope the Earth and our planet will be consumed in a fiery death.

Meanwhile, the core of the star collapses under gravity's pull until it reaches a high enough density to start burning helium to carbon. The helium burning phase will last about 100 million years, until the helium is exhausted in the core and the star becomes a red supergiant. At this stage, the Sun will have an outer envelope extending out towards Jupiter. During this brief phase of its existence, which lasts only a few tens of thousands of years, the Sun will lose mass in a powerful wind. Eventually, the Sun will lose all of the mass in its envelope and leave behind a hot core of carbon embedded in a nebula of expelled gas. Radiation from this hot core will ionize the nebula, producing a striking "planetary nebula", much like the nebulae seen around the remnants of other stars. The carbon core will eventually cool and become a white dwarf, the dense dim remnant of a once bright star.


​DEATH OF A MASSIVE STAR

Massive stars burn brighter and perish more dramatically than most. When a star ten times more massive than Sun exhaust the helium in the core, the nuclear burning cycle continues. The carbon core contracts further and reaches high enough temperature to burn carbon to oxygen, neon, silicon, sulfur and finally to iron. Iron is the most stable form of nuclear matter and there is no energy to be gained by burning it to any heavier element. Without any source of heat to balance the gravity, the iron core collapses until it reaches nuclear densities. This high density core resists further collapse causing the infalling matter to "bounce" off the core. This sudden core bounce (which includes the release of energetic neutrinos from the core) produces a supernova explosion. For one brilliant month, a single star burns brighter than a whole galaxy of a billion stars.

​Supernova explosions inject carbon, oxygen, silicon and other heavy elements up to iron into interstellar space. They are also the site where most of the elements heavier than iron are produced. This heavy element enriched gas will be incorporated into future generations of stars and planets. Without supernova, the fiery death of massive stars, there would be no carbon, oxygen or other elements that make life possible.

The Life and Death of Stars

"Melvyn Bragg and guests discuss the abrupt transformation of stars after shining brightly for millions or billions of years, once they lack the fuel to counter the force of gravity. Those like our own star, the Sun, become red giants, expanding outwards and consuming nearby planets, only to collapse into dense white dwarves. The massive stars, up to fifty times the mass of the Sun, burst into supernovas, visible from Earth in daytime, and become incredibly dense neutron stars or black holes. In these moments of collapse, the intense heat and pressure can create all the known elements to form gases and dust which may eventually combine to form new stars, new planets and, as on Earth, new life."

​- BBC, In Our Time Podcast

​The Becoming of Stars

Roland Faber in The Cosmic Spirit
​

​"Of all the potential spiritual uses of the image of the starry heavens, the light, the immensity of the space, the enormity of the numbers of stars (and planets and moons and comets and asteroids, and so on), the diversity of their characters, the stunning multiplicity of forms, sizes, and colors—one fact worth thinking about is captured by the epigraph of Whitehead in this chapter: by shining, stars waste away!

While our imagination has used stars or suns to indicate eternity, greatness, warmth, life, rarified bodies, and spiritual heights, no detractor of such images will, in a scientific age as ours, at least, be convinced of the relevance of these elevating suggestions if we will not, at the same time, also acknowledge the illusion of these projections. Stars don’t live eternally. In fact, they have interesting histories of becoming, and they die…In fact, they are the very material we are made of; what is more, they produce this material in the first place. We are—it is already a cliché—stardust, born from exploding, dying stars.

The chemical and quantum physical as well as relativistic processes and conse[1]quences are well known and make one of the most colorful stories of becoming and perishing of the great and violent realities in the cosmos, a show second to none. These light-shows perform the collective memory of violence and their outcome in explosions, compactifications, apocalyptic end-states, in their long way of dissipation into darkness. The greatest miracles of all are even invisible, as they do not emit light, but only swallow whatever comes their way: black holes are singularities, boundaries of the natural laws, strange objects of dark beauty and mind-bending, light-bending, time and space-bending extravagance.

In a sense, “eternity” appears again, here, in the permanent death of all matter and energy, as its light disappears beyond the event horizon and—never disappears “beyond” it, as everything leaves its imprint on the “screen” of the flat horizon forever; at the horizon where time slows down to “eternal arrest.” That is, as long as the sphere this horizon covers does not itself evaporate, which it does, although in painful slow motion, over 10 to the power of 100 years, maybe longer than the rest of the universe exists if it was not yet swallowed by these long-living sinks of energy-matter and primordial physical forces, space-time and gravity.

Sure, stars come in generations, the old ones show off when they die, the young ones form from what the geriatric elders leave behind. But, literally: what a colossal waste of matter-energy, space-time! The life cycle of stars that light up this vast universe for no reason at all, but following some strange rules of the interaction of matter-energy and space-time, is not a sign of eternity and heavenly light. If it is a sign of anything, it seems, it is one of the immolation of beings for the becoming of other beings, just to contribute again to their violent (exploding) or excruciatingly slow dimming, just stretching out the meaningless time of a universe that, in the end, seems to have had no reason to exist, in the first place, except to indicate (to itself) nothing more than this artistic act of disappearance. Counter to so many of the spiritual impulses that stars have held in the history of human cosmological reflection and religious veneration, the starry heavens are no divine host, but a host of scary figures. Stars are the greatest artists of death and the wonders of disintegration."

Roland Faber, THE COSMIC SPIRIT Awakenings at the Heart of All Religions, the Earth, and the Multiverse

Elegy for a Dead Star
​

Space on a Journey

​Flyby of a Whirlpool Galaxy