Storm Gardner
​
This page is about spiritual connections with animals. Before writing it, it was important for me to think about the amount of time (and how quality that time was) that I spent with the animal, and I certainly knew that it had to be one of my past or present pets. Because of the connections I formed with this specific creature and how I personified her, I knew that I could discuss no other than my chicken, Captain Redbeak. Raising her from a hatchling to a fully functional adult was such a huge responsibility, but I enjoyed every second of it. With growth followed love, development, antics, and sadness. Although she and her other compatriots are long gone from this worldly plane, they continue to exist in my heart and in the bird-heaven beyond as some of my closest friends.

It was many years ago, much too long for me to remember my age or how I was faring at the time. Yet, I can remember arriving home one stark, autumn day to a different feel in the house. It was indescribable, like the crunch of leaves underfoot in a forest, never knowing if the sound came from the leaves themselves or what lie beneath them. Turning the corner out of the kitchen, my parents met me with comical grins on their faces. “Guess what?” they prodded. Receiving word that we were going to raise chickens was exciting news! My sister had been begging for baby chicks for months now, and the dream was finally coming true. So, I questioned where the new additions to the family were, and my father took me into an adjacent room and showed me an odd, humming machine. It did not look like there were any chickens inside, however; there were waves of heat emanating from the contraption. I peered inside the glass window which revealed rows of light brown eggs. Apparently, this was an incubator and the chickens had yet to hatch. A return to my room was framed with disappointed, but little did I know how much these insignificant eggs would pick their way into my conscious.

​As the days passed by, I steadily became more and more aware of the oval-like objects sitting in my living room, soaking up heat. After approximately three weeks, the first beak penetrated the hard outer-shell. My mom hurriedly called us into the room, and a wet, furry blob flopped out of the broken egg; it looked up through the glass and cheeped at me, eyes full of surprise and wonder. I realized that I was the first thing it had set its eyes upon in this new world, which made me feel peculiarly special. Following, the rest of the eggs broke open within the day and the baby birds dried off slowly, becoming fluffier and more defined. It shocked me that they were all yellow with no way to distinguish one from another! It was not until later that they would molt, becoming distinct with their own colorings and patterns.

While the leaves clumped together at the bottom of now barren trees, the chickens stayed in the garage inside a cardboard box. A heat lamp was used to keep them warm during the winter season, and they were given daily water, food, and time to play when we came home from school. At first, they were scared when I would reach in and pluck one from off the ground into the air, but they grew accustomed to my incessant handling and petting. There was one chicken in particular that liked to claw up my arm onto my shoulder; she would sit atop my clavicle and call to her friends below, proclaiming her brashness to the more timid ones. During the awkward phase of gaining new feathers for flight, this chicken developed a beak that shone copper red when exposed to direct sunlight. Due to this and the fact that she sat on my shoulder like a parrot, I christened her Captain Julius Bartolomeu Redbeak III (Captain Redbeak for short).

The captain grew older and more beautiful with each successive molt of her feathers until she was a glorious mismatch of maroon, white, and lager brown. She also became more acknowledging of my presence. Whenever I would saunter downhill to the chicken coop to let the friendly birds out, she would greet me at the door and know that it was her turn to play. Classified as a free-range chicken, the Captain had reign over acres of sprawling pastureland which she explored at will. I thought it liberating to be able to watch her as she danced through the long grass without a care in the world, except for how many bugs she could catch. Through this, she taught me to take life slowly and enjoy the trivial things, however insignificant. Relaxation and thoughtfulness began to take precedence in my life because, without time to review what had gone on during the day, how would I be able to remember the wonderful experiences that had occurred?

By the time she was one year old, an unbreakable bond had been formed between this wondrous creature and myself. As I made daily circuits around the chicken coop to fill their water and food, Captain Redbeak would accompany me with my tasks, jumping on my shoulder as she always did. The view was regal: my leg raised onto a stump as she sat atop and peered into the wilderness. I enjoyed the sway of her body on my shoulder as I walked across the uneven ground, and it was mesmerizing to watch her head twitch back and forth, staying vigilant. Needless to say, mutual trust was a visible connection, like a golden thread stringing through the air between us. She depended on me for companionship and materials needs, and I had a loyal friend who I could count on to cheer me up.
​In her elder years, Captain Redbeak became much more docile, preferring a warm and calming afternoon After sitting myself down in a lawn chair to watch the birds frolic, she would leap into my lap, promptly sit down, and close her eyes, waiting to be pet. I always delivered because I loved to feel her soft feathers run through my fingers and watch her head cock sideways with contentment. Every once in a while, her piercing eyes would emerge from beneath their lids and she would stare into mine. I always felt like she could tell what I was thinking or that she was able to feel the currents of my soul. Regardless of how I felt, I knew that she loved me, but Captain Redbeak couldn’t live forever.

​One day, after I came home from school, my parents broke the news to me. Grief hit my heart like an anvil, and I thought my life had little meaning at that point. What was the point of living without a friend with whom you had built a trusting and respecting relationship? But, then I remembered images of the Captain becoming lost in the tall grass and bathing in the loose dirt behind the chicken coop. She had a full and pleasurable life in which she had many friends, including me, and she wouldn’t want me to have anything less. The freedom of flight is not a liberty of chickens, but they are still able to feel the rush of air beneath their wings as they glide across the ground. In this way, Captain Redbeak escaped worldly confinement into the churning of the universe, touching down every so often to remind me what my life was meant to be about. 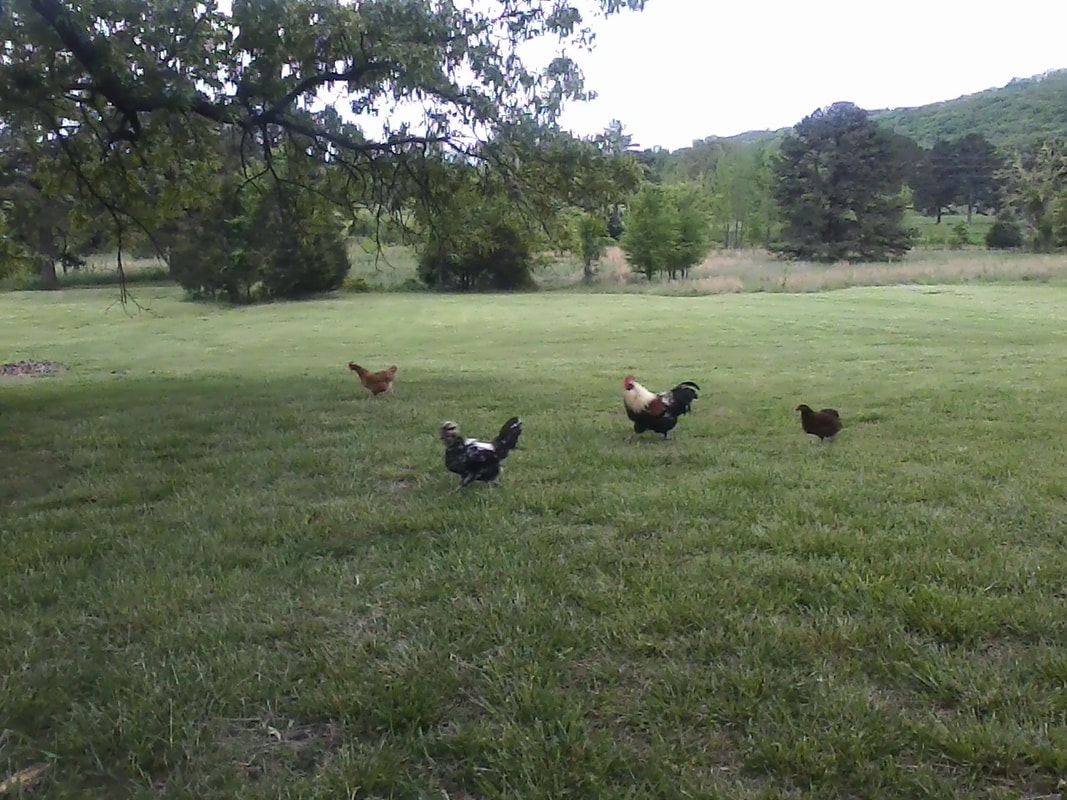