​The religions of the world, every one of them, had a historical origin. Every religion was, at one time, a "new" religion. Even in a godless world, even in a world where any sense of a transcendent sacred is absent, new religions are aborning. Try Harry Potter religion, or wellness (self-care) religion, or technology-can-save-us Silican Valley religion, or right wing alt religion. Often they are remixes of elements of older religions but adding something new: the remix itself. The novelty is not always beautiful, or good, or loving, or truthful. Sometimes it is only about personal fulfillment and private experience, lacking any sense of responsbility to a greater good or something more. But it is new. As Whitehead put it, the many become one and are increased by one. 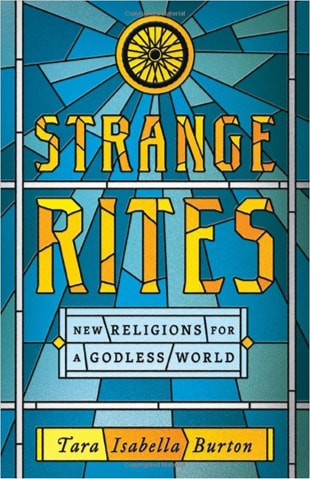 Religious scholars and cultural analysts have been trying to map the complicated phenomenon of the changing landscape of religion in the United States. The numbers of people who call themselves Christians are steadily declining, while the "Nones," those who claim no religious affiliation on polls and surveys, is now the fasting growing group in the population overall. A third of millennials identify themselves as religiously unaffiliated, and about a quarter of American adults overall. We call this group "spiritual independents" because although some do say they are atheists and agnostics, most consider themselves to be "spiritual."

These people are on a quest, like religious people in the past, but they are seeking new forms of community and their own practices and devotions. They advocate intuition rather than institutions. Tara Isabella Burton finds them fascinating, and her book Strange Rites makes for an equally fascinating read.

Burton has the experience, the credentials and the bold imagination to guide us through this unprecedented terrain. She is a columnist on millennial religion for Religion News Service, a contributing editor at The American Interest, and the author of Social Creature, a novel published in 2018. She received a doctorate in theology from Trinity College, Oxford, where she was a Clarendon Scholar, 2017. She also works as a touring expert for National Geographic, lecturing on expeditions in the Caucasus and the Alpe-Adrina.

With energy and panache, Burton dazzles us with her wide-ranging commentaries on the immense transformations taking place in what she calls a post-religion age where culture wars are raging, spiritual anarchy is popping up in strange places, and many of those who have left Christian churches are still yearning to create their own special tribes with a strong and a keen sense of belonging.

Burton takes a detailed look at seven different faith systems which have come alive during the decline of Christianity. She covers the beliefs and practices of fandoms and fan fiction sites with the Harry Potter franchise leading the way; the growing popularity of Wicca and its many neopagan rituals; the wellness culture and its emphasis on self-care, characterized by products promoted by Gwyneth Paltrow's Goop like jade eggs and juice cleanses.

The diversity of "new religions" take adherents on a jaunty quest for meaning, purpose, and ritual. Internet and consumer capitalism have gotten into this post-Christian religious search which excludes an institutional base, creeds, and clergy. Three more options for seekers are what Burton calls the California Idealogy of Silicon Valley; the Progressive Social Justice Movement, and the Atavism of alt.Right culture.

These spiritual orientations offer lively opportunities to think about your view of what it means to be human, to be free, to reside in a hackable future, to think about utopianism, to probe the religious dimensions of extremist groups, and to contemplate the importance of modern justice movements.

It will be edifying to see what kinds of rituals, values, mystical excursions, and philosophies these devotees of "remixed" religions come up with, especially in the face of future environmental disasters, economic woes, more global pandemics, and the ongoing crises facing millions of homeless refugees.

After reading Burton's encyclopedic overview of seven new faiths in America, it comes as no surprise that she is critical of the self-oriented character of these paths and their swerve away from transcendence. What does she call for as an alternative? It is not something you would expect. In an opinion piece for the New York Times, she writes:

"Many of us call ourselves 'Weird Christians,' albeit partly in jest. What we have in common is that we see a return to old-school forms of worship as a way of escaping from the crisis of modernity and the liberalist-capitalist faith in individualism."

By a return to "old-school forms of worship," she means Eastern Orthodox piety and an affirmation of the Latin Mass.

​"By and large, today's new cults of and for the Remixed are what I will call 'intuitional religions.' By this, I mean that their sense of meaning is based in narratives that simultaneously reject clear-cut creedal metaphysical doctrines and institutional hierarchies and place the locus of authority on people's experiential emotions, what you might call gut instinct. Society, institutions, credited authorities, experts, expectations, rules of conduct — all these are generally treated not just as irrelevant, but as sources of active evil. Wellness culture, modern occultism, social justice activism, techno-utopianism, and the modern sexual revolution all share a fundamental distrust, if not outright contempt, for institutions and scripts. Most of these new religions share, too, the grand narrative that oppressive societies and unfairly narrow expectations stymie natural — and sometimes even divine — human potential.

"Today's Remixed religions valorize different forms of emotional experience — a person's perceived energy as a clue to their bad character, a modern witch's sense of divine presence during a spell-casting session, a feminist's lived experience as an authoritative account of the world — as the key to interpreting both meaning and purpose. They value, too, authenticity: the idea that one's actions are in harmony with one's emotions. They're less keen on rules, or doctrines, or moral codes that they dismiss as restrictive or outmoded. They're suspicious of moral or truth-claims that don't root themselves in subjective experience. Three-quarters of millennials (and 67 percent of the religious Nones overall) now say they agree with the statement 'Whatever is right for your life or works best for you is the only truth you can know,' compared with just 39 percent of the elderly, and 47 percent of practicing Christians of all ages. The Remixed demand agency and creative ownership in their spiritual lives, dissatisfied with the narrowness of the options available. Among the most common sayings I heard among the people I interviewed was, 'I made my own religion.'

"And the Remixed are willing to put their consumer collars into pursuing these new religions. If 'sex sells' was the unofficial advertising mantra of the Mad Men era, then 'spirituality sells' is the slogan for post-2016. One 'experience management software,' for example, promises without a shred of irony that it will 'help turn customers into fans/products into obsessions/employees into ambassadors/brands into icons.'

"The most successful new religions of 2020 and beyond are the ones that have taken this intuitional turn and found ways to make it both communal and — in an increasingly brand-driven age -- salable. They're the ones that take the extant consumer-capitalist culture of our age — smartphones, social media, Moon Juice, 4chan boards, oat milk — and make interacting with it into a sacred ritual, an avenue to fulfilling a wider purpose in a meaningful world. They're the ones that alchemize our everyday activities — eating, working out, following the news, posting on social media — and turn them, as Punchdrunk did to the McKittrick Hotel, into strange and sacred rites, not hobbies but rituals. They're the ones that have figured out how to take Twitter, or Instagram, or consumer culture, and enchant it.

"For some, this freedom is revelatory, even necessary. For many women who see in organized religion the relics of an oppressive patriarchal culture, or for the nearly 50 percent of queer people — so often marginalized by traditional faiths — who now call themselves religiously unaffiliates, these new religions offer an opportunity to seek out spiritual trust and a connection with the divine, beyond doctrine (and often communities) that would treat them as pariahs.

"But, at the same time, the refractory nature of these new intuitional religions — each one, at its core, a religion of the self — risks creating an increasingly balkanized American culture: one in which our desire for personal authenticity and experiential fulfillment takes precedent over our willingness to build coherent ideological systems and functional, sustainable institutions.

"When we are all our own high priests, who is willing to kneel?"
Open Horizons