​Ten Key Ideas
​
in the process understanding of God

1.    God's unchanging aim is for beauty understood as richness of experience.
2.   God seeks salvation for each and all: universal richness of experience.
3.   God is in the world through fresh possibilities or "initial aims."
4.   We feel God's feelings and share in God's desires. God is within us.
5.   God is both eternal and everlasting: non-temporal and infinitely temporal.
6.   God is nowhere and everywhere: non-spatial and omni-spatial.
7.    God is lovingly affected by the world: a fellow sufferer who understands.
8.   God saves the world through tenderness.
9.   God is many as well as one.
10.  God recycles love.
​

To the ten ideas many process theologians will add two more.  For some among them, these two are especially important.

11. God is not in complete control of the world; God acts through love not domination: One is that God's power in the universe and in human life is persuasive not coercive, invitational not manipulative, loving not combative, which means that God is not all-powerful in the sense that God wills, permits, or could control everything that happens, including tragedies.  All of this is entailed in the process view that God acts in the world through fresh possibilities or initial aims.  For process theologians there are many things that happen in the world that are genuinely evil. murder, rape, abuse, cruelty, violence, and injustice.  Not all things are  "meant to be" from a process perspective.  God, too, laments and then redeems with the provision of new possibilities.

Both of these ideas are controversial for many who are steeped in classical, Greek-influenced traditions, whether Christian or Muslim.  Today a prominent Christian theologian, Thomas J. Oord, has been especially influential in helping to foster a powerful social movement aimed at promoting these two ideas and critiquing their alternatives: the idea that God acts through controlling power and that the future, as actuality, is already known by God.  We might call it the God Can't movement, because it is deeply influenced by Oord's book God Can't.  If you are interested in this movement, I suggest you take a look at the work of the Center for Open and Relational Theology and also the Facebook group called Healing with God Can't.

In naming the ten ideas above I am emphasizing what is most prominant in the understandings of God in Whitehead's Process and Reality and John Cobb's A Christian Natural Theology.  These two books have been deeply influential in the minds and hearts of many process theologians.  Please add these two additional ideas to the list if twelve seems better than ten for any reason.  My own view is that a person can have a meaningful and "process" understanding of God with many different combinations of the twelve ideas.
​

Ten Key Ideas with Quotes
from John Cobb and Whitehead

​
The eternal and unchanging aim of God is to enjoy harmonious intensity, or “strength of beauty.”

Whitehead speaks of God as having, like all actual entities, an aim at intensity of feeling. (PR 160-161.) In terms of the developed value theory of Adventures of Ideas, we may say his aim is at strength of beauty. This aim is primordial and unchanging, and it determines the primordial ordering of eternal objects.  (John Cobb in A Christian Natural Theology)

God’s eternal and unchanging aim is not for divine satisfaction alone but for universal satisfaction.

But if this eternal ordering is to have specified efficacy for each new occasion, then the general aim by which it is determined must be specified to each occasion. That is, God must entertain for each new occasion the aim for its ideal satisfaction. Such an aim is the feeling of a proposition of which the novel occasion is the logical subject and the appropriate eternal object is the predicate. The subjective form of the propositional feeling is appetition, that is, the desire for its realization. (John Cobb in A Christian Natural Theology)

In God, however, there are no such tensions because the ideal strength of beauty for himself and for the world coincide. Hence, we may simplify and say that God’s aim is at ideal strength of beauty and that this aim is eternally unchanging... In God’s case there is nothing selfish about the constant aim at his own ideal satisfaction, since this may equally well be described as an aim at universal satisfaction.” (John Cobb in A Christian Natural Theology)

Even as God’s aim for the world is unchanging, the aim is also flexible.  It is continuously adapted to changing circumstances.  These adaptations, as felt by human beings and other living beings, are the initial aims.

Certainly God’s aim is unchangingly directed to an ideal strength of beauty. In this unchanging form it must be indifferent to how this beauty is attained. But if God’s aim at beauty explains the limitation by which individual occasions achieve definiteness, then in its continual adaptation to changing circumstances it must involve propositional feelings of each of the becoming occasions as realizing some peculiar satisfaction. God’s subjective aim will then be so to actualize himself in each moment that the propositional feeling he entertains with respect to each new occasion will have maximum chance of realization. (John Cobb in A Christian Natural Theology)

In the initial phase of our subjective aims for ourselves, we feel God’s feelings and want for ourselves what God wants for us.

Every occasion then prehends God’s prehension of this ideal for it, and to some degree the subjective form of its prehension conforms to that of God. That means that the temporal occasion shares God’s appetition for the realization of that possibility in that occasion. Thus, God’s ideal for the occasion becomes the occasion’s ideal for itself, the initial phase of its subjective aim. (John Cobb in A Christian Natural Theology)

God is both timeless and infinitely temporal, eternal and everlasting.

For Whitehead, "time" is physical time, and it is "perpetual perishing." The primordial nature of God is eternal. This means that it is wholly unaffected by time or by process in any other sense. The primordial nature of God affects the world but is unaffected by it. For it, before and after are strictly irrelevant categories. (John Cobb in A Christian Natural Theology)

The consequent nature of God is "everlasting." This means that it involves a creative advance, just as time does, but that the earlier elements are not lost as new ones are added. Whatever enters into the consequent nature of God remains there forever, but new elements are constantly added. Viewed from the vantage point of Whitehead’s conclusion and the recognition that God is an actual entity in which the two natures are abstract parts, we must say that God as a whole is everlasting, but that he envisages all possibility eternally. (John Cobb in A Christian Natural Theology)

God is everywhere (non-spatial) and nowhere (omni-spatial).  There may be many dimensions of space.

It is possible in Whitehead to consider time in some abstraction from space without serious distortion. Successiveness is a relation not dependent upon spatial dimensions for its intelligibility. I understand Whitehead to say that time, in the sense of successiveness, is metaphysically necessary whereas space, or at least anything like what we mean by space, is not. There might be one dimension or a hundred in some other cosmic epoch. Since God would remain unalterably God in any cosmic epoch, his relation to space must be more accidental than his relation to time. (John Cobb in A Christian Natural Theology)

God is an everlasting companion to the world: infinitely patient, tender, and empathic, feeling the feelings of all actualities.

God is the great companion— the fellow-sufferer who understands. (Alfred North Whitehead, Process and Reality)

The ‘consequent nature’ of God is the physical prehension by God of the actualities of the evolving universe.  (Alfred North Whitehead, Process and Reality)

It is here termed ‘God’; because the contemplation of our natures, as enjoying real feelings derived from the timeless source of all order, acquires that ‘subjective form’ of refreshment and companionship at which religions aim. (Alfred North Whitehead, Process and Reality)

God saves the world through tenderness

The consequent nature of God is his judgment on the world. He saves the world as it passes into the immediacy of his own life. It is the judgment of a tenderness which loses nothing that can be saved. It is also the judgment of a wisdom which uses what in the temporal world is mere wreckage.  Another image which is also required to understand his consequent nature† is that of his infinite patience. (Alfred North Whitehead, Process and Reality)

God includes the multiplicity of the world within God’s own everlasting life.

The consequent nature of God is the fluent world become ‘everlasting’ by its objective immortality in God…Thus the consequent nature of God is composed of a multiplicity of elements with individual self-realization. It is just as much a multiplicity as it is a unity; it is just as much one immediate fact as it is an unresting advance beyond itself. (Alfred North Whitehead, Process and Reality)

God recycles. As the world becomes part of God, the “love in heaven” floods back into the world as perpetual refreshment.

The love in the world passes into the love in heaven, and floods back again into the world. In this sense, God is the great companion— the fellow-sufferer who understands. (Alfred North Whitehead, Process and Reality)

​Where John Cobb’s analysis diverges from Whitehead in two ways:
​
It would be possible to support this analysis in some detail by citation of passages from Whitehead that point in this direction. However, I resist this temptation. The analysis as a whole is not found in this form in his writings, and it deviates from the apparent implications of some of his statements in at least two ways. First, it rejects the association of God’s aim exclusively with the primordial nature, understood as God’s purely conceptual and unchanging envisagement of eternal objects; this rejection is required if we deny that God’s immutable aim alone adequately explains how God functions concretely for the determination of the events in the world. Second, it interprets the subjective aim of the actual occasion as arising more impartially out of hybrid feelings of aims (propositional feelings whose subjective form involves appetition entertained for the new occasion by its predecessors. In other words, it denies that the initial phase of the subjective aim need be derived exclusively from God. (A Christian Natural Theology)
​

​Summary of Approaches to God
in the Process Movement
​ 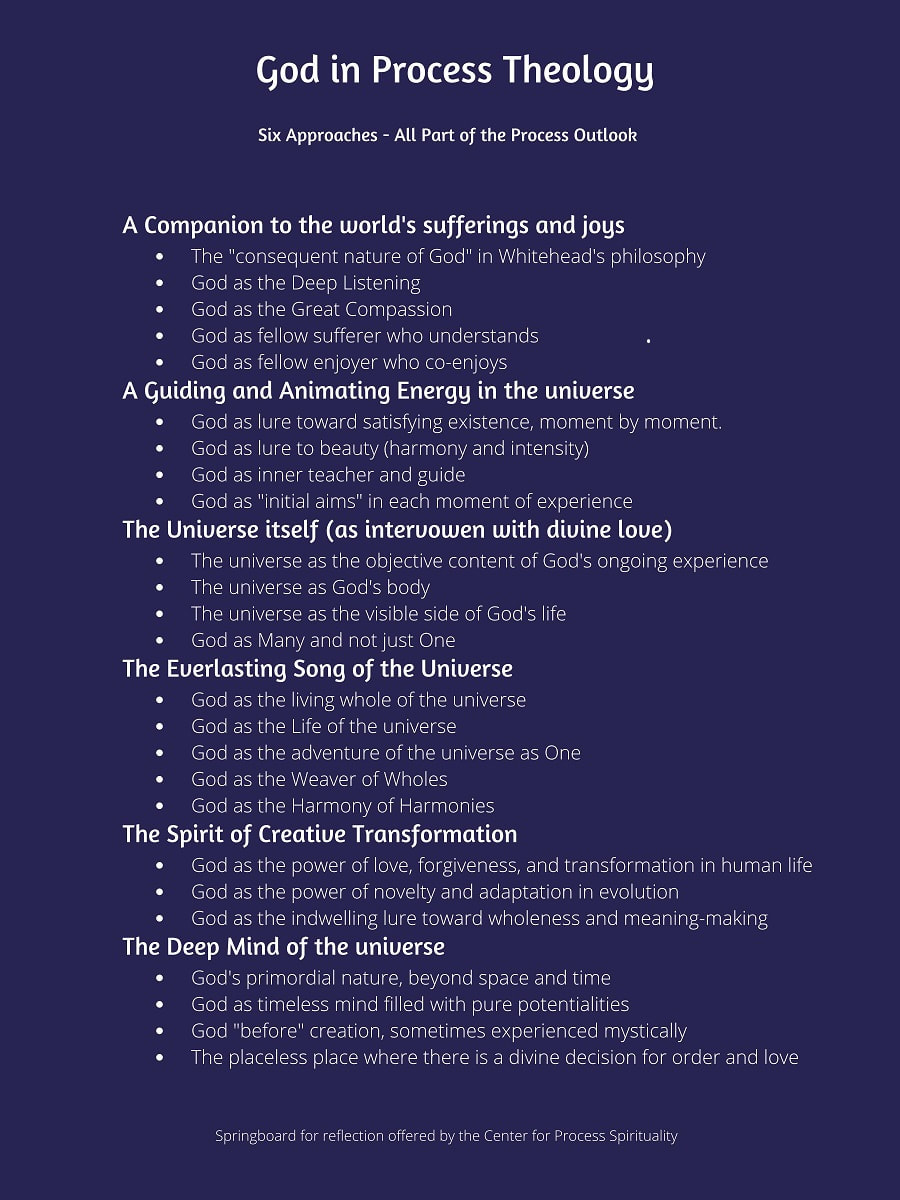 The Open and Relational Approach

God Can't: How to Believe in God after Tragedy, Abuse, and Other Evils
Center for Open and Relational Theology
Healing with God Can't
Open Horizons