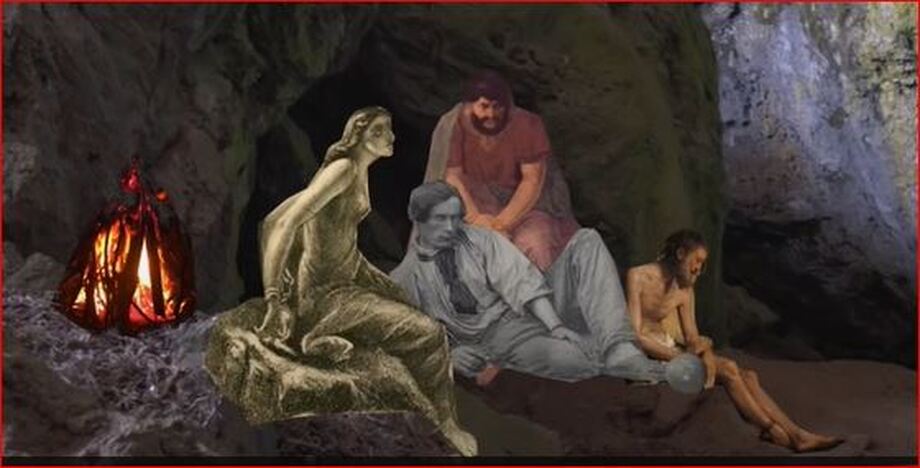 Screenshot from Video offered by School of Life

​​“The safest general characterization of the European philosophical tradition
is that it consists of a series of footnotes to Plato.”

AN Whitehead, Process and Reality
​
"The prisoners in the cave assume that these shadows are real and that if you pay a lot of attention to them, you’ll understand what is happening in life. They don’t realize that they are looking at mere phantoms of the mind manipulated by advertisers, politicians, clergy, and political action committees. How to break free of the phantoms? Open-ended conversation, beginning with a recognition of mutual ignorance, and seeking truth together, is one place to begin.”
​
A footnote to Plato.

The Allegory of the Cave

​"The School of Life The School of Life is an educational company that offers advice on life issues. It was founded by a number of intellectuals including Alain de Botton in 2008 and has branches in London (headquarters), Antwerp, Amsterdam, Berlin, Istanbul, Mexico City, Paris and São Paulo Seoul, Taipei and Tel Aviv."
​
​

Read the Allegory for Yourself​

“Plato’s famous allegory of the cave, written around 380 BCE, is one of the most important and influential passages of The Republic, and is considered a staple of Western literature. It vividly illustrates the concept of Idealism as it was taught in the Platonic Academy. In this dialogue, Socrates (the main speaker) explains to Plato’s brother Glaukon that we all resemble captives who are chained deep within a cavern, who do not yet realize that there is more to reality than the shadows they observe fleeting across the rock wall before them."

The Allegory of the Cave

The video rendition of Plato’s Allegory of the Cave offered by the School of Life group is but one. The allegory has been told and retold many times and interpreted in various ways. For a more complete introduction, please read text of the allegory below and listen to the BBC “In Our Time” podcast featuring three Plato scholars.

We best note that, historically, not all readers of Plato have been enamored of Plato’s image. This-worldly critics interpret the world outside the cave as a realm of timeless forms; and, given their modernist and empiricist tendencies, they eschew the idea that such a world exists. They think the allegory encourages us to leave the world of flux and change, and rest in false assumptions of timeless absolutes.

We might also note that the allegory can be interpreted theologically. Many interpreters (and I among them) see the Sun outside the cave as God or, to use Plato’s language, the Good. The entire tradition of neo-Platonic Christian theology, including that of Augustine, has found this vision helpful. On this view, our very intellects, when apprehending things through the light of reason, are themselves illuminated by the light of the Sun or God. This does not make our views infallible, but it does present the life of the mind as a form of spirituality, of piety, in its own right. Non-theists resist this way of thinking.

Finally, let us recognize that many interpreters of the Allegory understandably reject the allegory of the Cave because, in their view, the very image leads to an elitist idea that only “philosopher kings” and “philosopher kings” can govern society. They see the allegory as an invitation to authoritarianism. Plato himself was not in favor of democracy. Listen to the BBC podcast for more on this.

But what I find helpful about the rendition of the Allegory offered by the School of Life group are two ideas, both very important to process philosophy and theology.

The first is its depiction of life in the cave, with its idea that many of us, perhaps all of us, are trapped by phantoms of the mind. Our minds are not just windows to reality, they are homes for phantoms: conspiracy theories of this or that nature, for example. And also problematic ideas of God. I see the phantoms today as coming from social media, advertisements, politicians, and clergy.

The second its recommendation that breaking free of illusions comes through dialogue with others in a shared pursuit of truth. Would that education K-12 and thereafter could include, in some creative way, training in the arts of seeking truth together along with a recognition that our fervent beliefs, for good or ill, are sometimes (and maybe oftentimes) but phantoms in the mind.

Here is the depiction of the cave-dwellers.

“They assume that these shadows are real and that if you pay a lot of attention to them, you’ll understand what is happening in life. They don’t realize that they are looking at mere phantoms. They chat about shadowy things enthusiastically and take great pride in their sophistication and wisdom.”

And here is the description of philosophy, understood as a shared pursuit of truth.

"The solution is a process of widespread, carefully administered philosophical education, by which he understood the method of inquiry pioneered by Socrates and known to us as the Socratic method. It is a very gentle process. You don’t lecture or harangue or force someone to read a particular book. You just start with a general declaration of intellectual modesty. No one knows very much, and wisdom starts with owning up to ignorance. Confess that you don’t know what the government should do, what war is meant to achieve, or how good relationships work. You get the other person to say what they think, and gradually, together, you investigate the answers. Most likely the other person will be confident or rather painfully over-confident. They may tell you it’s all quite simply really and everyone knows the answer. You must be supremely patient with this kind of bravado. If they go off topic, you must cheerfully double back. You must take a lot of time and be ready to have chats over many days. This method of talking is founded on a lovely confidence that with the right encouragement, people can eventually work out things for themselves and detect errors in their own reasoning, if you carefully and quietly draw their attention to tricky points, and don’t cast blame or ever get annoyed. You never teach anything anyone by making them feel stupid, if they are, at first."

This interpretation of Socratic conversation has a gentler feel to it than I see, for example, in irritable and impatient philosophers and, for that matter, the person of Socrates as he sometimes appears in Platonic Dialogues. A process approach will appreciate this gentler approach, with its appeal to the spirit of persuasion not coercion, to mutuality not "winning." But one thing clear is that Socratic conversation thus described is a process and that being skilled in this process is something very much needed in education today. A process approach to education has something like Socratic conversation at its core. This is one reason among many that education needs to introduce people to the dialogical arts. It is not simply through answers, but through open-ended questions in which we admit our ignorance, that the fulness of life is found.

​A Scholarly Discussion offered
by BBC of Plato's Republic