​The Church of Sonic Wandering

imagining a church with open ears

Thank you for joining us tonight at the Church of Sonic Wandering.   As a process-relational church, we want to approach the world with open hearts, open minds, and open ears.

Our desire to have open ears naturally leads to listening to music at our gatherings.  After all, as we see things, the whole universe is made of feelings.  Music is what feelings sound like.

The philosophers among us say that musical events (including our listening to the music we hear) better represent the very nature of the universe than, for example, a landscape painting -- although we like landscape paintings, too.  The universe consists of interconnected events unfolding through time, like music.  Nothing stays the same even though there are recurring patterns, like music.  The world can be beautiful or terrifying or both, like music.  They invite us to think of the universe, and even God, as music-like.

We don't choose music only because we like it; we choose it because other people like it.  We want to hear the musical choices of others in a sympathetic way, so that we can, in the words of process theology, "feel their feelings." Music helps us build community with the world.

We are also open to the possibility that some of the music tells us something about the more than human world: the feelings of animals, the rhythms of the cosmos, the sounds inside God's mind.   Yes, in our desire to have open ears, we are a musical church.

Nevertheless, the sonic side of our community is more than music.  It includes an interest in sound as such, and in the activity of wandering in sound.  A few of  us are connected with an emerging discipline in the university called Sound Studies.  We enjoy reading the materials of sound studies scholars, sound artists, and sound professionals.  It is from the that we get the idea of wandering in sound.

By wandering in sound we mean:

​
We believe that many of the sounds, as interpreted and in context, can evoke and convey qualities of heart and mind that form humanity's spiritual alphabet, ​​  We borrow this idea from an interfaith group called Spirituality and Practice.  We can experience and enjoy a sense of play, openness, shadow, mystery, hope, imagination, joy, questing, and justice by wandering in sound. 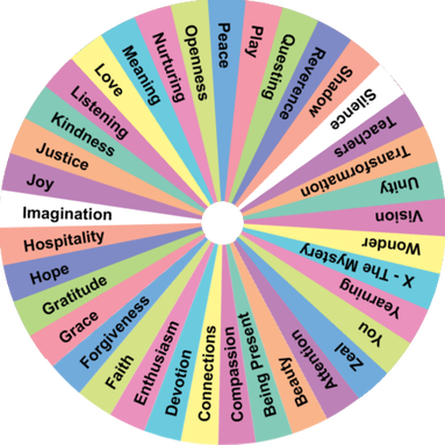 Even as we believe in sound-wandering, we also believe in world-healing.  Ultimately, the reason we place so much emphasis on sound is that it teaches us about the world, and the world is our moral frame of reverence.  The poet and writer Wendell Berry puts it this way:

We want to live in way that are good for the world, and we want our actions to be guided by that good.  We think God wants the same of us.  But, like we said, the world doesn't consist of visible objects that can be weighed and measured; it consists of the feelings and energy that make up those objects.  Subjective aims, subjective forms, hopes and dreams, fears and memories.  We want to help create a better world of respect and care for the entire community of life.  It must begin with listening.   A friend from Nazareth once said: "Blessed are the peacemakers, for they will be called children of God"   We want to add, "And blessed are the listeners, for they can hear the cries of the world and respond in love."