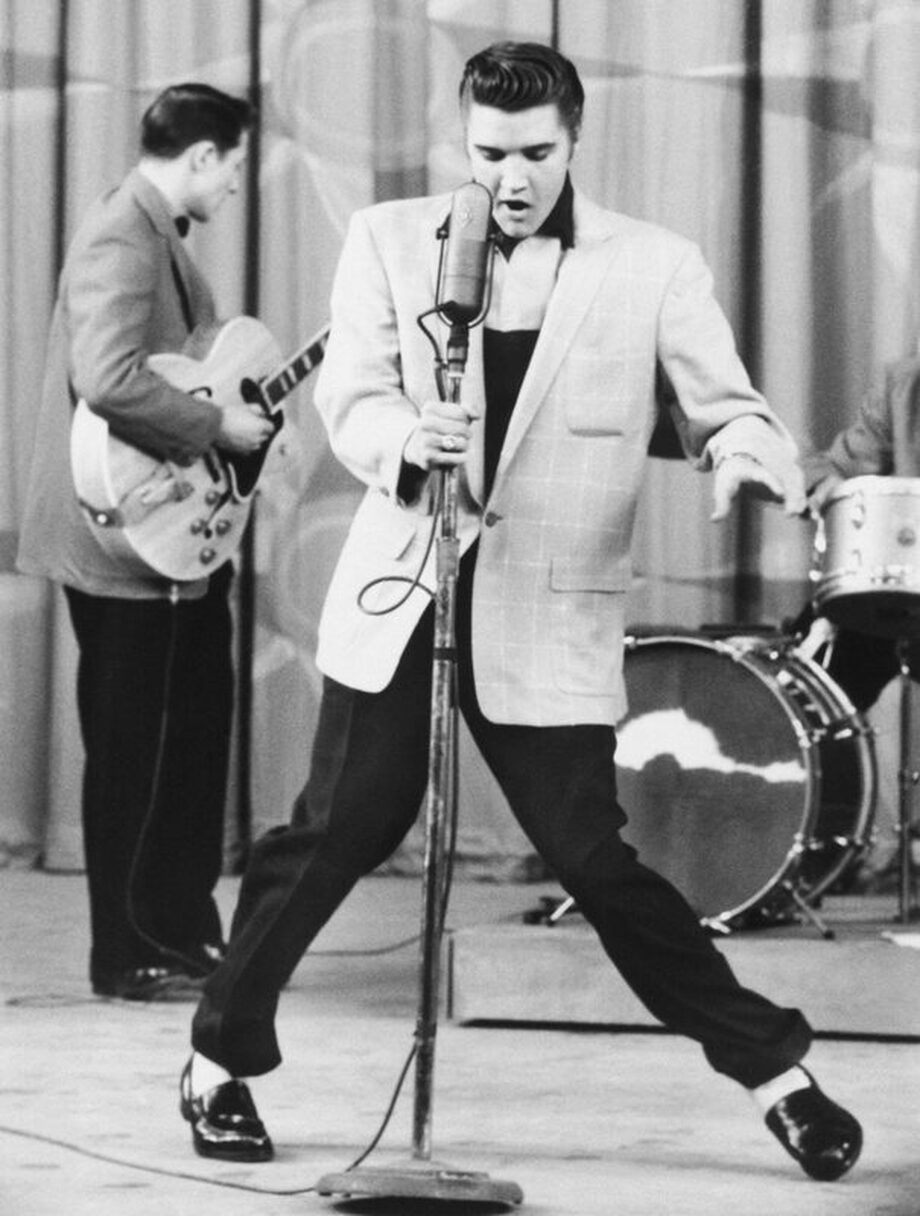 It wasn't just the music,
it was the dancing, and
on television!

No one benefited more from television than Elvis, who appeared on national programs at least twelve times from January 1956 to January 1957...While it is well known that Elvis transgressed racial boundaries that still largely separated white and black culture in the 1950s, his appearance and behavior on the tube also threatened class hierarchies and reminded people that America’s youth were defining themselves against adult norms.

Elvis redefined popular music stardom by his failure to conform to accepted conventions of performance decorum, and the most threatening aspect of his performance was his violation of gender codes. Elvis crossed gender boundaries in several ways, but it is my contention that his most troubling transgression was to called attention to his body as a sexual object. In the history of mass culture.  Elvis may be the first male star to display his body in this way overtly and consistently. In violating this taboo, Elvis became, like most women but unlike most men, sexualized. In adopting an explicitly sexualized self-representation, Elvis played out the implications of becoming the object of the gaze....

The major factor in Elvis’s feminization was the sexual suggestiveness of his dancing. This dancing was a source of shock when it was first presented on national TV...

There is good reason to believe that Elvis’s dancing, like his singing, was an adaptation of black performers’ styles. T-Bone Walker and Wynonie Harris are often mentioned as precursors. Harris’s producer, Henry Glover, said, “When you saw Elvis, you were seein’ a mild version of Wynonie.”  Some who knew Elvis in his prerecording days say that he learned his style from performers on Memphis’s Beale Street: “He would watch the colored singers, understand me, and then got to doing it the same way as them. He got that shaking, that wiggle, from Charlie Burse … right there at the Gray Mule on Beale. Elvis, he wasn’t doing nothing but what the colored people had been doing for the last hundred years.”

The question of just what, if anything, Elvis did bring to this style can probably never be settled, because the black musicians whom he imitated were seldom filmed. But that is my point. Black blues musicians were part of a subculture; their music did reach a mass audience, but their live performances did not. What distinguished Elvis’s performances was that they were televised, and, in the cases of the Milton Berle Show and Ed Sullivan Show, they were watched by enormous audiences consisting mainly of whites who had never seen R& B singers perform. It was not just the size or racial composition of the audience that is significant here, however. The context in which Elvis performed gave the dancing he learned from black performers a new meaning, as did the persona he developed in collaboration with his manager, Colonel Tom Parker, and the entertainment industry.

In Process and Reality Whitehead proposes that the aim of all experience as "satisfying intensity." Even God seeks such intensity, says Whitehead. God feels the feelings of all living beings and is enriched by their enjoyments. Surely these worldly enjoyments includes the bodily enjoyment: hip-swiveling and leg-shaking, for example. Perhaps this is one of many reasons why, as rumor has it, God was such a fan of the early Elvis.

The Enduring Popularity
​of Elvis Presley

The arc is one so familiar in American popular culture that it has become almost mythic:  a startling and original talent emerges apparently from nowhere, transforms a medium of expression, inspires a passionate following, struggles to live up to the expectations of the fans, and ultimately falls victim to the American cult of celebrity.

Elvis did not originate the pattern:  before him were his near-contemporaries James Dean, Marilyn Monroe, and in music, Hank Williams.  After him is a very long list that would include at a minimum Janis Joplin, Sam Cooke, Jim Morrison, Jimi Hendrix.  We still remember these icons, still celebrate their contributions.

But no one has exercised the hold on the American popular imagination more firmly, or more enduringly, than Elvis Presley.  Thirty-four years after his death at the age of forty-two, his home in Memphis remains one of the most visited tourist sites in the United States, attracting visitors from around the world, and his songs remain among the most played, and most readily recognized, of any performer on the planet.  Why this should be the case is both fascinating and mystifying.  If no one has as yet produced an entirely satisfactory answer, there are at least a few aspects of the phenomenon that can be identified:

1.  His is the archetypal rags-to-riches story we have come to regard as the distinctively American narrative of success, at the same time that it is also a cautionary fable of the price of wealth and celebrity.

2.  His voice and persona are distinctive, immediately recognizable and frequently imitated.

3.  His music and his performance style were transgressive, violating boundaries of race, class, and sexuality that disturbed the adults who assumed the responsibility of enforcing social norms even as it delighted their teen-aged children, defining a generational tension that continues to be one of the driving forces of contemporary American culture.

4.  At the same time, his public persona was one of humility, generosity, authenticity.

5.  He appealed to the generation of post-war Baby Boomers, just beginning to emerge as a force in the market, at the same time that prosperity and technology made his music (and later, his movies) readily available to them, and this generation has remained as a powerful force in the market and in the culture ever since.

6.  There are in fact many versions of Elvis, each of them appealing to slightly different, though often overlapping constituencies—the pre-Army Rock ‘n Roller, the movie star, the Las Vegas attraction;

7.  His career was very shrewdly managed during his life, by his manager Col. Tom Parker, and his legacy has been even more expertly managed by EP Enterprises since his death.
Open Horizons