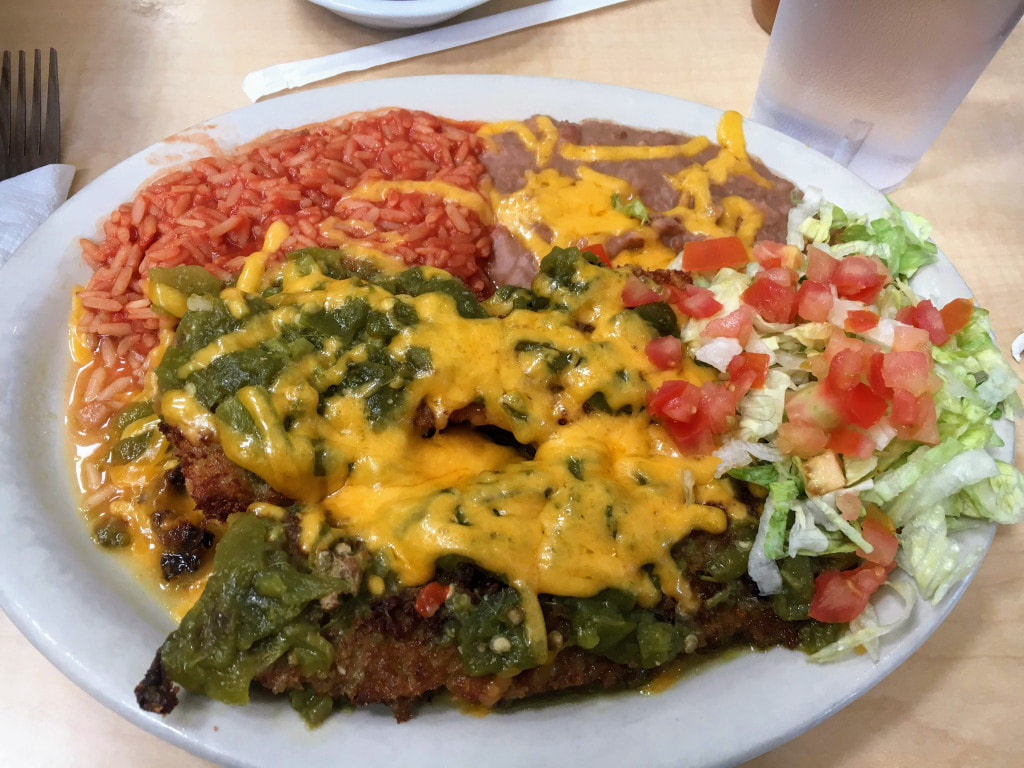 Let There Be Tortillas

Theology and the Search for "Authentic" Mexican Food
​​

originally posted in The Entertaining Anthropologist
​

For more from Anne Goldberg on Food and Politics from a Cultural Perspective, see her website:
Anne Goldberg: The Entertaining Anthropologist
I do love traveling, don’t you?

I’ve been going back to some home places this last month, revisiting favorite parts of the country and, of course, favorite dishes. My journey began with a stop in New Mexico, a state I lived and worked in for a few years. I have to tell you, I love the food in New Mexico. When I was pregnant in Arkansas, all I wanted was ground lamb-stuffed sopapillas with red sauce from Angelina’s in Española, New Mexico. I actually shed tears about this craving. Bitter, bitter tears.

Honestly, Angelina’s is home to a few fabulous dishes, including their chile rellenos.

Some people think that New Mexican food is not “real” Mexican food. Here is a thing I want to tell you about “Mexican food”: It’s not one way. There is not a right way. There can be a way you like, for sure, but do not come at me with “authentic.”

Authentic is the bane of an anthropologist’s existence. Authentic implies one way; it implies the truth and the past. It ignores change and innovation, which all people are allowed. Now, anthropologists would like for people to be allowed change on their own terms and at their own pace, but cultural mixing and trying new things are truly features of being human.

Let’s take tortillas, shall we? I can’t tell you how many times that people in the U.S. have told me that corn tortillas are “authentic” and that flour tortillas are for gringos. In many parts of Mexico, people mostly make corn tortillas for themselves and they grow lots of corn. Lots of it, every spare place, like by the mailbox and in the backyard. Corn really is the thing. “Sin maíz, no hay país,” (without corn, there is no nation) as Francisco Toledo likes to say in his campaign against genetically modified corn in Oaxaca.

Yet in Sonora, a northern state in Mexico bordering Arizona, wheat has been cultivated from early Spanish colonial times. Wheat can be grown in winter and spring, times when corn cannot be grown there, allowing for two productive crops in a year. Indigenous farmers welcomed the introduction of this crop in the 16th century. Today, a specialty of Sonora, and also of the O’odham people, are tortillas sobaqueras. These flour tortillas are huge, stretching nearly from the hand to the armpit (or sobaco). I had these for the first time in Agua Prieta, Sonora, where they were served with local pride. And as a side note, when a Mexican friend ordered a chimichanga in front of me long ago in Nogales, Sonora, I asked naively, “But, are those really Mexican?” She said, “Well, people argue over whether they were invented in Sonora or Tucson, so I don’t know, but I love them.”

When someone at a restaurant asks me what kind of tortillas I want, I always ask, “Do you make either of them here?” And if they do, that’s the one I get. Homemade is always better. When I was working in Douglas, Arizona, right on the border, I interviewed a Mexican-American woman in her 80s. When I left her house, she sent me home with a dozen of her freshly-made flour tortillas. When her daughter heard, she was jealous almost to the point of anger. “Those are gold,” she told me fiercely, “They are like gold.”

My point here is not that flour tortillas are the best. I just want people to be open to difference, and to realize that difference may have it’s own “authentic” history. We had a favorite Mexican place in Little Rock that has closed. The Yelp reviews were full of complaints about how it wasn’t like what the reviewers had in San Diego or Dallas. If you asked the owners, they would proudly tell you what state in Mexico they were from and how their dishes were from that region. Many people claim that they know “authentic” Mexican, and dismiss what is in front of them, without realizing that Mexican cuisine is hugely regional.  Embrace the local versions! Sure, some restaurants cater to Anglo tastes. I always ask what the waiter likes the best, though, and try that. Figure out what they do well and stop pretending that a chile relleno will be, or should be, the same everywhere you go.

In New Mexico, the green chile is king. Okay, someone is going to be mad that I wrote that because red chile sauce is also king. All you have to do is look at the ristras strung up on peoples’ porches and doors to know that. But, the smell of roasting green chile all over the state beginning in August is quite something. Grocery stores have giant drums set up for roasting, so you can get yours fresh. And you should definitely do that.

I’m just going to admit that the way I like chile rellenos best is the way they do it in New Mexico. I don’t even order them in other states anymore and I don’t make them myself. I know what I want when I ask for a chile relleno. I want them a little crispy. I want them with green chile on top. I want the chile itself a little al dente, with some chew to it.
​
And I want sopapillas to come with them. Big ones, with honey. Hot.

Do you know how this is? I don’t order certain things in restaurants. I am always disappointed with gazpacho because it is not MY gazpacho. I like it the way I make it. I would never order chicken piccata in a restaurant. Mine is better, and also, chicken? Why would I get chicken if I could have something else? That better be some special chicken. Life is short, friends.

My strategy, again, is to get regional. Order what they are good at where you are. Get the huevos with the plantains and posole on the side and piñon-atole pancakes.

My father-in-law was born and raised in New Mexico, though he has lived in Colorado for many years now. He is completely particular about his Mexican food. For him, real Mexican food comes from New Mexico. He drives to a certain farm stand in northern New Mexico to buy his fresh and dried chiles. He is not compromising on this issue.

He makes a chile verde, which I will share with you, that is sometimes insanely hot and other times not so insanely hot, depending on the chile. It is what it is. He will serve it to you with corn or flour tortillas, rolled or flat. It’s not the presentation, it is the chile verde that matters.

He got this recipe from a guy he knew, now passed away, named Jesus. It was a family recipe and he was given it on the condition that he never change it. So don’t mess with it, or Jesus in Heaven will be mad. (You can blame my father-in-law for that one!) He says that, but my husband has an ancient hand-written recipe for chile verde from his dad that is substantially different from the version that his dad put in the fundraiser cookbook for the local ski club. What stays the same are the ingredients – the ratios vary with your taste and the heat of the chiles. So, for god’s sake do not put onions in while you cook the sauce, but you can sprinkle on raw onions when you serve and if you don’t (I don’t) people think there might be something wrong with you. I’m going to share the fancy typed version of the recipe with notes, because I think he has refined his technique over the years. He has also become more fond of a very hot version, and that’s just fine. Pretty much everyone who has this dish wants it again, so I think you’ll like it.

Roast the pork butt at 300 degrees for about 3 hours until done (old recipe says 325°). Cool enough that you can remove the hard fat and cut into 1-inch chunks, but reserve the juices. While the pork is roasting, remove the skin and seeds from the chiles and dice them (old recipe says put them in a blender). Don’t wash them too much with water or you will remove some of the heat and flavor. Combine all ingredients, along with salt and pepper to taste, in a large pot on the stove. Add enough water to get things boiling, but you will want to end with a fairly thick consistency. Bring to a boil and then reduce to a simmer for 6 hours, adding more water as necessary.
​
You cannot eat these without beans. Jim makes them from dried pinto beans and he adds bacon or salt pork to them while they cook.
To serve, you can make stacked enchiladas with corn tortillas. Put down a heated tortilla, add beans and chile verde and cheese, and diced, raw onions, add another tortilla and repeat with chile verde and cheese. You could fix this up in a casserole to serve the family. You can also roll up the beans, chile verde, cheese, and onions in a heated flour tortilla and make burritos. Or you can put the beans in a bowl, add chile verde, and top with cheese and onions, and eat with a tortilla on the side. It’s how you like it!
​
As you can see, the ratios adjust the heat of the chiles. Cooking this will require tasting. If it’s too hot, you can add more tomatoes. Too mild, add some more roasted chiles. And remember, this recipe won’t be like the other chile verde you have had. It’s a regional dish. Enjoy!