“Too often, contemporary science-fiction movies are just thrillers pumped up with special effects and the latest in zap-gun futurology. Big-wow explosions and franchise brands tend to matter more than ideas in these tricked-out action flicks, especially in the shiniest, priciest major-studio releases. Every so often, though, a small-scale, thoughtful movie like “Advantageous” comes along and summons up a speculative new world with brains, some frugal sleight of hand and the cool confidence that, in the future, our greatest threat won’t be rampaging robots or alien invasions but the same hard-charging menace that’s haunted the planet since time immemorial — people.”

​- Manohla Dargis. NY Times, June 25, 2015
short film on which movie is based, also directed by Jennifer Phang
DIRECTOR JENNIFER PHANG is an idealist, but she's also realistic. Spend any amount of time with her and it's apparent there is a constant internal tennis match in her mind between a cynicism nurtured by exposure to an unfair society and a stubborn hope that we can learn to be better—better to women, better to the environment, better to each other. It's a struggle we all face, but in her new film, Advantageous, it's Phang's optimistic side that takes match point.

"It's basically an anti-cynicism movie," Phang says. "It's an attempt to re-engage moviegoers who've lost hope." 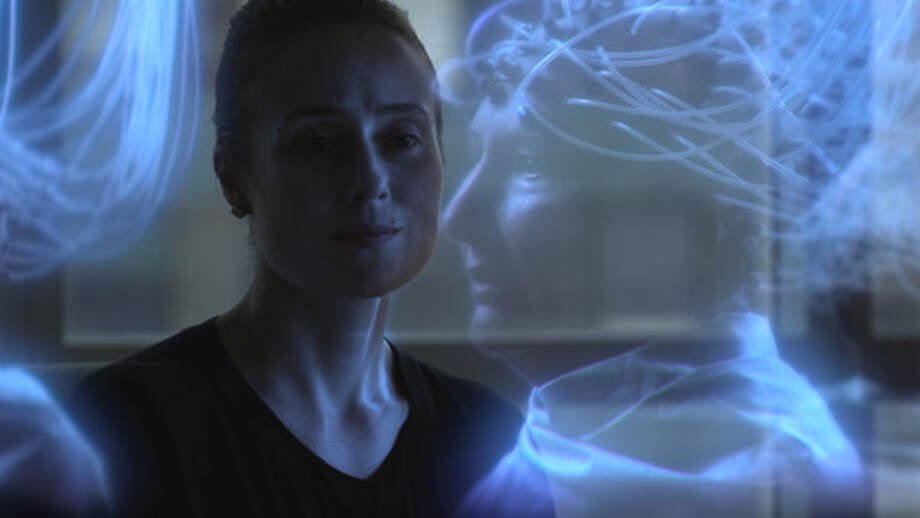 Film Review of Advantageous by Frederic and Mary Ann Brussat​
​
This intricately developed and well-acted science fiction fantasy began as a dystopian short film by director Jennifer Phang. In an interview, she says: "It's basically an anti-cynicism movie. It's an attempt to re-engage moviegoers who've lost hope."

This is one of those under-the-radar films that is over-shadowed by the deluge of action movies with comic book superheroes so treasured by Hollywood as big money-makers. Phang sees science fiction as "a way for people to deal with real issues in a slightly abstracted way so that they can handle it."

Gwen (Jacqueline Kim) is a single mother who lives with Jules (Samantha Kim), her 14-year-old daughter, in a large metropolis in an unspecified future date. She has a prestigious job working as a spokesperson for Advanced Health and Living, a corporation selling youthfulness and beauty products to women. Gwen is very close to her daughter and firmly believes that she deserves, as a brilliant student, to attend an elite prep school where she can get on the fast track to a fulfilling and meaningful career.

Gwen's plans are shattered when she learns that the company no longer needs her as a spokesperson: they want a younger woman who can speak to youth. Fisher (James Urbaniak), her boss, comes up with a way for her to regain her job and to get the money she needs for Jules's education. But he warns her that the entire body makeover will entail painful side effects and a drastic change in the way others relate to her.

Director Jennifer Phang and actress Jacqueline Kim have created an engaging and thought-provoking screenplay that deals with mother-daughter relationships, female unemployment, the yearning of parents to get their children into prestige schools, the commodification of the female body, and the exceptionalism of youth. All of these substantive themes are afoot today in our culture, and it is refreshing to see them dealt with in this ambitious drama. Viewers will appreciate seeing Gwen and her gifted daughter struggling with such universal issues as careers, carving out a future for your children, and having enough water to survive.