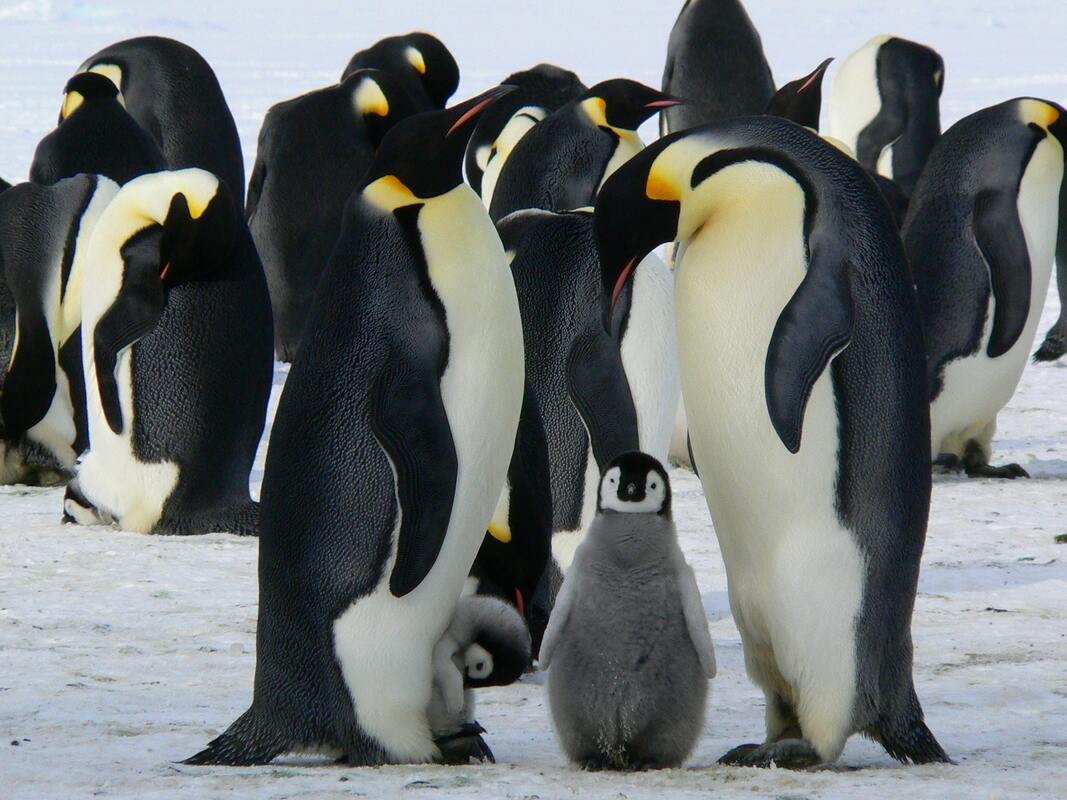 ​Always we are learning from the world around us. From other people; books, movies and films; landscapes and waterways; and, of course, from other animals. Penguins, for example.

​Documentary films such as March of the Penguins (see below) help us to learn from penguins even as most of us cannot see them in-person. And penguins are, after all, persons. In process theology a person is a series of persons, of experiencing “subjects."  The subject you are today is not the subject you were yesterday; you are always in process. And so it is with penguins.

Like us, penguins are on a journey, a pilgrimage. Their pilgrimage is to survive with satisfaction relative to the situation at hand, in community with others, through mating and bonding, ritual and play. Our human pilgrimage is, of course, quite similar. Our shared pilgrimage is prompted by genetic impulses and environmental circumstance, and also by an inwardly felt lure to live life to its fullest.

This inner lure is one way that the Spirit of the universe, God, is within all of us, moment by moment. Penguins much included. God is inside each of us as our will to live with satisfaction. The Bible calls it the breath of life.

How, then, might we live? That is the question we humans ask in ways that penguins need not. Our aquatic, flightless  friends seem to know what to do in ways that surpass our feeble powers of discernment. Perhaps we can learn from them. In their review of March of the Penguins, Frederic and Mary Ann Brussat offer us seven lessons from penguins. Call it practical theology, penguin style.

1. Walking slowly is one of the best ways to move. We're often in too big a hurry. Waddling is the right rhythm for those who want to savor all that is going on around them.

2. Stand tall, and do not let the forces of nature torment you or bring you down.

3. In courting rituals, try bowing to the one you love. It is a sign of both tenderness and respect.

4. Huddling together in a circle is one of the best ways to handle tough times when the winds of change knock you for a loop or you just need to be close to the warmth of another in times of suffering.

5. All of us have a nurturing instinct within us and part of the spiritual task of life is to draw it out in as many ways as possible.

6. We all need some play time and that usually happens in a milieu that enables us to let go and do what comes naturally.

7. Each of us has a distinct voiceprint. Use it well to sing a loving song to the ones who are near and dear to you.

​​March of the Penguins

An extraordinary French documentary on the lives
​ and habits of Emperor Penguins in Antarctica.

​The Penguin Encounters at the four Sea World amusement parks combined draw 10 million people a year. We love penguins. They walk upright like humans. Their waddling draws out our maternal instincts. Whether they are swimming, diving, or climbing up on the snow, they seem to be playing. We like identifying with them.

Penguins are creatures of instinct who have been around for 40 million years. But as this extraordinary documentary by Luc Jacquet shows, penguins go way beyond our easy categorizations of them as cute and anthropomorphic. They are incredibly adaptive birds whose survival instincts, mating rituals, and parenting skills have been honed over the centuries. The overall effect of experiencing this film narrated by Morgan Freeman is one of reverence for Emperor penguins and their manifold mysteries.

Ernest Shackleton, the explorer, called Antarctica, the coldest, windiest, driest, and darkest continent on the planet. It is home to the Emperor penguins who at the same time every year abandon fun in their ocean home and begin a march to their breeding grounds. They walk in single file, looking like pilgrims on a holy trek. When they tire, the penguins slide along on their stomachs in toboggan style. The journey is often gruesome with heavy winds and blinding snow. Luckily, they have bulked up with food for the previous three months. They will need all the energy they have to reach the breeding grounds where they were all born.

When they finally arrive, the penguins begin a courting dance and mating ritual, where couples pair off and settle next to each other, side by side for better or for worse. The weather usually grows worse as they await the arrival of the single egg. This precious result of their union is transferred from the female to the male who takes on the responsibility of sheltering and protecting the egg while the female heads off with her sisters on a 70-mile trek to the sea for more food. What a sight to witness the males cradling the egg on the tops of their feet in a small pouch covered by a flap of skin!

In the face of incredible winter storms with 100 mile per hour winds and temperatures of 85 below zero, the penguins huddle together in large groups, eager to warm themselves next to their nurturing brothers. They do not eat for months and must depend on their mates to return safely with food. When the egg hatches, it is the father who gets the first glimpse of the chick. Meanwhile, the females porpoise in the waters as they search for krill and other fish.

In some amazing footage, these animals who can hold their breath for 15 minutes, dive to 1700 feet in pursuit of food. This is the true home for these aquatic marvels who are agile and speedy underwater. They face the dangers of leopard seals and the exhaustion of the long walk back to the breeding grounds. Once the families are reunited, the female takes over and the starving males head off to the sea for food with their buddies. They have lost half of their body weight during their nurturing period, and the older penguins pay the price by falling over and dying on the journey to the sea.

The rituals of coming and going continue, and the chicks during one period are left alone. When a father returns with food, the young one must signal him with a sound and identify him correctly from all the rest. The struggle for survival continues on the breeding ground until the youngsters are ready to head out on their own toward the water. Watching them "take the plunge" is very gratifying for it signals the end of one cycle and the start of another.

Thanks to the creativity of director Luc Jacquet, the cinematography of Laurent Chalet and Jerome Maison, and the music of Alex Wurman; our pilgrimage with these black-and-white animals is a magical experience filled with many moments of wonder, delight, and reverence. We have even learned a few spiritual things from our journey with them:  See above.

Tallest penguin species at risk from climate change melting ice, which could wipe out third of Antarctic population by 2100