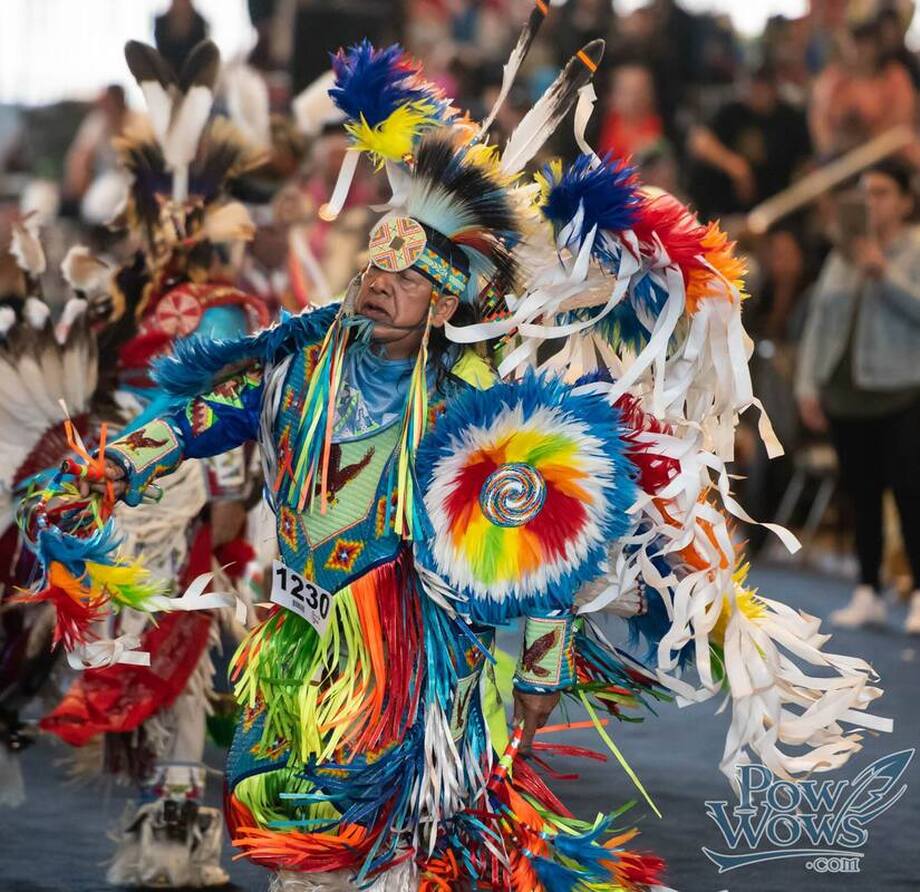 ​A powwow is a gathering to bring Natives together and to re-identify themselves with who they are and what they have lost. It is a cry for what was ours, what is still ours. A powwow is something that can pull out the meaning of that native self.

The need of 21st century peoples around the globe is to develop communities that are creative, compassionate, participatory, humane to animals, and good for the Earth, with no one left behind. In the process movement we speak of them as "just and compassionate communities" and seek a world that is a community of communities of communities. See the bottom of this page for more.

The development of such communities cannot emerge from wise philosophies alone, or from wise public policies. Such communities need forms of celebration (dancing, singing, drumming, and socializing) that lend themselves to friendship and community. They need powwows, and the history of powwows provides a key why they are so important.

The Pluralism Project at Harvard describes the history this way:

"The history of the powwow movement illustrates the celebration’s long association with intertribal peace and friendship.

It is said that in the 1870s a young woman of the Lakota Sioux was given a large drum filled with spiritual power and instructed how to use it and how to dance along with it. In her vision she was told that this drum would have the power to bring blessings and peace to all Native peoples.

In keeping with this vision, the Lakota shared the Drum Dance with their long-time enemies, the Anishinaabe Ojibwe. The Drum Dance tradition soon spread throughout the plains and woods of the upper Midwest to the Menomini, Potawatomi, Winnebago and peoples of the Plains.

​Especially in the early days, the dance and the songs were considered to be forms of prayer and were embedded in a rigorous code of ethics and respect." (Harvard Pluralism Project)

The lesson is clear. The powwows need to be intertribal in a certain way, welcoming people from different paths, secular and sacred. They might even be interfaith powwows, including Buddhists and Hindus, Christians and Jews, Muslims and Sikhs, Daoists and Confucians. And, of course, secular people, too.

Perhaps it can help if participants recognize that "religion" itself is not sufficient for understanding the powwow, if the word refers to a separate compartment of life. In the powwow there's so much more than "religion" thus understood. The heart of the powwow is singing, drumming, dancing and socializing: the being together in ways that build upon the past and point to the future, pulling out the meaning of a native self that runs deeper than consumer culture, international conflict, corporate rule, and devastating violence.

For non-natives, the first step is to be grateful for indigenous powwows and the gift they offer to the world. It is to listen and, when possible, tap your feet, supporting native peoples as they develop in their own unique ways. In the spiritual alphabet, "T" is for teacher. The powwow is the teacher,

Native Americans have lived in North America for over 13,000 years. The continued presence and rich diversity of contemporary Native communities in the United States discredits the pervasive myth that there are no more Native Americans.

Today hundreds of thousands of Native people from more than 500 distinct tribal communities testify to the continued resilience and diversity of Native Americans in America. They speak English, Spanish, Navajo, Ojibwe, and more than 100 other languages. They live in sovereign nations and within the 50 states, on farms, in towns, and in cities. They perform ceremonies, they run businesses, and they go to medical school. They write legislation and they write novels.

​One of the few common elements within the diversity of Native traditions is the idea that all dimensions of social life are profoundly integrated. Instead of “religion,” the broader term “life-way” is often used to describe the traditions of Native peoples.

In none of the Native American languages do we find a word that translates well into the English word “religion.” One of the few common denominators underlying the diversity of Native traditions is the sense that all dimensions of social life are profoundly integrated. Even among those Native people for whom English has become the primary language, many think the term “religion” as it is often used today is not useful; it seems to suggest an artificial separation of their spiritual traditions from their economy, government, art, law, medicine, and landscape. In most Native views, these aspects of life are all interrelated. Thus, rather than “religion,” the broader term “life-way” is often used to describe the traditions of Native peoples. While it is something of a truism for the devout of any religious tradition to assert that theirs is not a “religion,” but a way of life, for Native American communities, it is often emphatically the point.

At powwows across America, Native Americans gather for dancing, singing, drumming, and socializing. Most consider the powwow to be more celebration than ceremony, but it contains elements of both. Today powwows are important as central expressions of tribal and intertribal Native American identity. This sense of a broader identity does not replace, but complements the tribal identity Native peoples may have as Navajo, Lakota, or Wampanoag.

More than 900 powwows are held throughout the United States and Canada each year. They vary a great deal in size and in nature. Some powwows are large commercial events, with dance competitions that attract substantial non-Native audiences. Others are small scale gatherings where singers, dancers, and onlookers are involved in ceremony and prayer as well as socializing. Wherever its place along the continuum between these poles, a powwow is regarded by many Native people of different tribes to be a celebration of their identity as Native Americans.

Today, whether as “contest” or “performance,” the singing, drumming, and dancing of the powwow tradition are an important mainstay of tribal ways of life. A powwow may be dedicated to honoring the elders, giving thanks, remembering the Holocaust, or marking sobriety. Even at contest powwows, special honor-dances take time to recognize the contribution of outstanding young people or elders. In the course of the powwow, dancers, drum groups, and visitors often share a large feast prepared in their honor by the host community. Around the outer circle of the powwow grounds, burger and “Indian taco” stands, along with jewelry and gift stalls, create the atmosphere of a fair.

​Give-aways may be scheduled to coincide with powwow celebrations. In the give-away tradition a family honors the memory of a loved one or celebrates a special occasion by saving up and providing gifts to others. Give-aways express an old and widely held ethic of sharing wealth by giving away prized articles, including such traditional gifts as blankets, beadwork, and homemade quilts.

​"The Coahuiltecan were various small, autonomous bands of Native Americans who inhabited the Rio Grande valley in what is now southern Texas and northeastern Mexico. The various Coahuiltecan groups were hunter-gatherers. First encountered by Europeans in the sixteenth century, their population declined due to imported European diseases, slavery, and numerous small-scale wars fought against the Spanish, criollo, Apache, and other Coahuiltecan groups. After the Texas secession from Mexico, the Coahuiltecan culture was largely forced into harsh living conditions. It is because of these harsh influences that most people in the United States and Texas are not familiar with Coahuiltecan or Tejano culture outside of the main population groups mostly located in South Texas, West Texas, and San Antonio."

For America’s Native peoples, the drum is much more than a percussion instrument. For many different tribes and traditions, the drum is a powerful and resonant symbol of Indian identity and spirituality. The Anishinaabe Ojibwe people of the Great Lakes region, for example, have particularly rich traditions surrounding the drum. They speak of it as the “heartbeat” of the people, not itself an object of worship but a spiritual messenger that voices the collective prayers of the people to the world of the spirits.

- Harvard Pluralism Project
​
Simply put, without a drum, there is no powwow. The drum consists of the instrument and its singers. It is the center of the arena and the center of attention. The drum sings songs for all occasions – from a contest song, to a birthday song, flag songs, memorial songs, veteran's songs, intertribal songs, etc. Drums travel many miles to attend powwows and will sometimes sing for eight hours straight, giving their all to make the dance successful. Good drums draw the best dancers, so every powwow committee tries to get the best drum possible...A song is started by the lead singer, who will not announce the song, he simply begins with the lead. Today, there are many fine drums that travel the powwow circuit, spreading their songs throughout the continent. Most drums write their own songs, a task that requires talent and blessings from above. 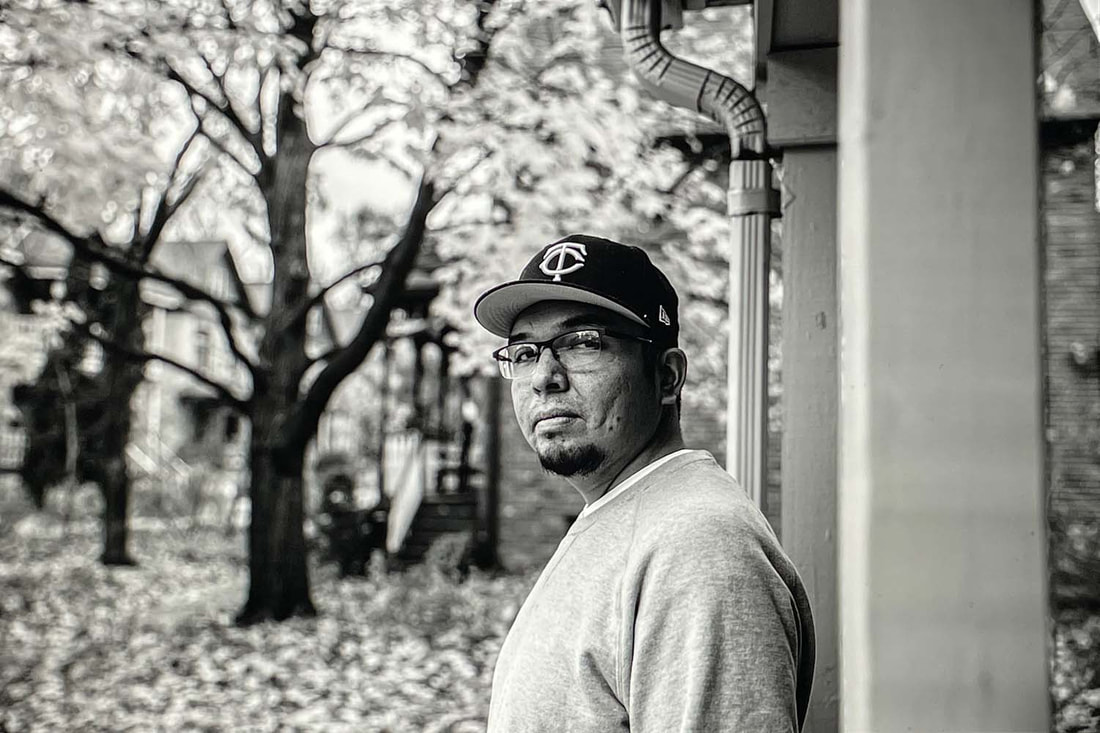 Photo by David Guttenfelder
"Joe Rainey is a Pow Wow singer from Red Lake Ojibwe in Minneapolis, a city with one of the largest and proudest Native American populations in the country. On Niineta, Rainey demonstrates his command of the Pow Wow style, descending from Indigenous singing that’s been heard across the waters of what is now called Minnesota for centuries, and accompanied by cinematic, bass-heavy production from Minneapolis producer Andrew Broder. The two of them first met backstage at Justin Vernon’s hometown Eaux Claires music festival before encountering each other more frequently through Vernon and Aaron and Bryce Dessner’s 37d03d collective—both contributing to the last Bon Iver album. Depending on the song or the pattern, Rainey's voice can celebrate or console, welcome or intimidate, wake you up with a start or lull your babies to sleep. Each note conveys a clear message, no matter the inflection: We’re still here. We were here before you were, and we never left."