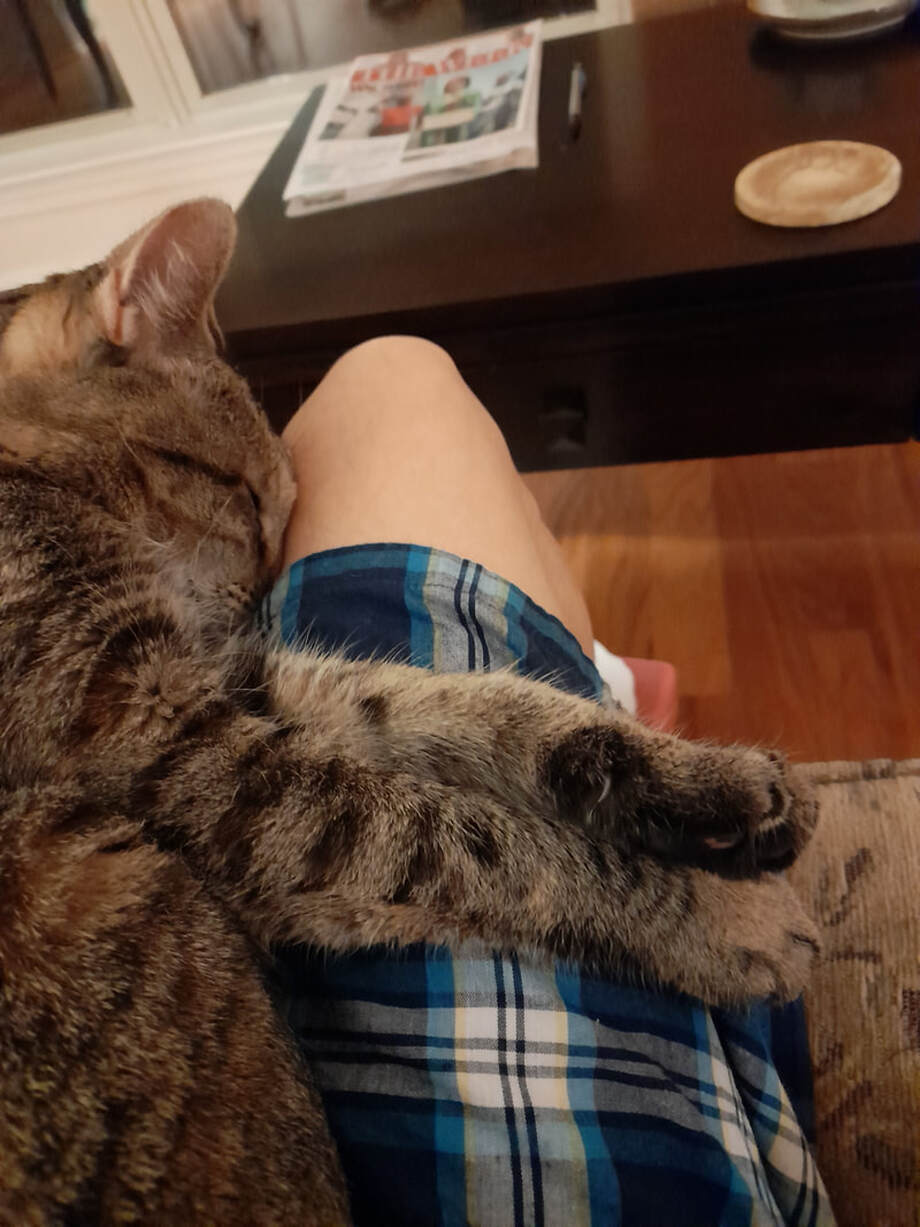 ​
The Secret Life of a Cat
​
by Terry Goddard

The following was written by Process thinker, Jay McDaniel.  I found it interesting, in particular because Miriam and I live with a cat.  Jay’s essay led me to write about our cat.  The cat’s name is Olive, but we call her Ollie … sometimes Ollie Bollie and sometimes Sweet Pea.  This last nickname is not symbolic of her nature, however.  But first Jay’s piece.
​
​The process movement (see Process Nexus) is devoted to the creation of communities that are creative, compassionate, participatory, diverse, inclusive, humane to animals, and good for the Earth, with no one left behind.  These communities are the building blocks of what we call "ecological civilizations."  Being humane to animals includes, of course, compassionate treatment: protecting animals from abuse, providing space for them to enjoy their unique forms of satisfaction.  But it also includes a sense of kinship with them: that is, a recognition that they, like us, are subjects of their own lives, with experiences of their own, that are valuable to them and beautiful in their own right.  Animals inspire awe, wonder, and a sense of connection.  For the religiously-minded, such respect entails a twofold recognition: (1) that the cosmic Soul of the universe, God, is within animals an inwardly felt lure to live with satisfaction relative to the situation at hand and (2) that animal experiences add richness to the divine life that would not be present otherwise.  In short, the cosmic Soul feels their feelings and is enriched by what is felt, quite apart from human life.  God would not be "God" without the animals.

Of course, human beings are animals, too.  We and other animals are all "creatures of the flesh," to use biblical language.  The use of the word "animal" to refer to non-human beings is a concession to popular parlance, even as it suggests a dualistic cosmology that is problematic.  The bottom line, however, is that other animals enjoy and suffer aesthetic experiences, forms of consciousness, and forms of thinking that are worthy of respect and admiration.

Don’t get me wrong, Ollie’s moods aren’t a great deal different from my own; she may express them in different ways, however.  Let me describe a typical day.

When it is cold (as it is now – November) Ollie will sleep between us.  Miriam and I are early risers, so Ollie is too.  We get our coffee and go to the den to read the paper and talk about our plans for the day.  Ollie climbs into Miriam’s lap and snores contentedly.  When I get up to get a second cup of coffee Ollie takes my place and refuses to give it up when I return.

We all have breakfast, and then this morning Ollie and I played ball.  This is one of her favorite games.  I roll the ball across the floor, and she runs after swatting it between her paws until both she and the ball crash into a wall.  Then I retrieve the ball and the game starts over.  Ollie is happy.

Generally, Ollie greets us with tail point up and rubs against our legs and desires to be petted.  Sometimes she jumps up on the desk of a chair and expects the same greeting.  This morning I had a pen in my hand and approached Ollie as she was leaning toward me in a chair.  As I reached out to pet her (with the hand holding the pen) she hissed at me and ran.  Of course, she was frightened and  upset, and her behavior upset me.  We stayed away from one another for a bit and now we are on “speaking terms” again.

I have learned a lot from having cat companions (Ollie is our second one).  Ollie (most of the time) brings me a great deal of happiness.  It is comforting having a little companion around.  We care for her, and she gives us joy.  It seems to me a good trade.

Did you know that there are five feline personality types? According to a study in which researchers applied a model of human personality traits to pet cats, these feline purr-sonality types are dubbed “The Feline Five,” and include:
​
If you struggle with your cat’s behavioral problems or have a multi-cat household where certain cats don’t get along, understanding your cat's personality can help you understand why your cat is behaving in certain ways. It can help you form a game plan so you can make adjustments to the home or provide your cat with something they're missing, such as environmental enrichment - or something as simple as a place to hide.
​
Knowing the “normal” or baseline personality of our cats can also help us keep tabs on their health. A change in personality could indicate an underlying medical issue, like a normally outgoing feline suddenly growing withdrawn and hiding more often.
​
Neurotic Cat

Cats with high scores in the "Neurotic" type are anxious or highly strung cats, displaying strongest levels of traits such as insecure, anxious, fearful of people, suspicious and shy. They're the cats that run for cover when visitors come over. They would rather hide than face the unknown!

The key to working with "Neurotic" cats is to give them plenty of opportunities to hide. Provide them with hideaways throughout the house, whether that is a cat tunnel, cat tree, or simply a cardboard box.

According to Dr. Pippa Elliott, these somewhat fearful felines cope with life by avoiding scary situations. But once they learn they are safe, they slowly begin to grow more confident.

Cats are generally seen as curious creatures, and cats that score high in the "Extroverted" category are even more so; "nosy" might also apply. These cats tend to need more mental stimulation and environmental enrichment. They can get bored easily and may resort to destructive behaviors to vent their pent-up energies.

The answer is to provide them with plenty of toys and spend time each day playing with them.

Dominant Cat
​
Cats with Dominant personalities can make a multi-cat household frustrating and stressful. Dominant cats may hog household resources, such as food, toys, and even the litter box.

If you're struggling with a dominant cat bogarting all the goods, make sure each cat has their own food and water bowls, as well as multiple litter trays. Place these resources apart - the dominant cat can't be everywhere at once.

Impulsivity in cats isn't necessarily the same as it is in humans. A highly impulsive cat may be reacting to something stressful in their environment.

This type of cat may react differently to the same situation on different occasions. This is often a case of a cat who hasn’t quite learned to cope with life and, when faced with uncertainty, runs first and asks questions later. He may also have to manage a mix of high energy and anxiety.
​
Never shout at a spontaneous cat (or any other, for that matter) — it will raise his anxiety levels and increase his erratic behavior. It helps to have set routines, such as feedings and playtime, so he knows when something is about to happen — which prepares him to behave more appropriately.
​
Agreeable Cat

An Agreeable cat is exactly what it sounds like - the social butterfly of the bunch, who gets along with everyone and is never short of a friendly meow, a raised tail, and a happy headbutt. They are ideal cats for a multi-cat household. This agreeable personality is often the result of a cat who was well-socialized as a kitten.

According to the study, low scores for Agreeableness (a cat who might be irritable/aggressive towards people) could reflect "poor socialization, frustration, or underlying pain or illness."

Of course, every cat is unique and has its own blended personality, just as humans are. But being in tune with your cat’s personality can help you better meet your cat's needs on an individual level and provide them with the ultimate kitty paradise in your home.
If you're interested in taking a personality test for your cat, you can find the survey here!

Although we call the world’s most popular pet “domesticated,” there are ongoing debates about how domesticated our feline companions truly are.
​
There’s no question that cats still have a bit of the wilderness in them. It’s evident in the way they play, prowling through our houses as if they’re stalking prey in the wild, keeping their claws honed and sharpened, ready to strike at anything that moves.

Studies show that domestic cats, unlike dogs, don’t really need human care to survive. They are some of the world’s most effective hunters, after all, with nearly 70 percent of their hunts ending in success. If cats can survive (if necessary) without us now, did they really need us way back when? If they didn’t need us to survive, why did they decide to stick around? How did they become the pets we know and love today?

Recent studies show that our fluffy companions likely became domesticated some 10,000 to 12,000 years ago, by farmers in the Middle East, after strolling onto our farms and into our homes in their confident feline fashion. And ever since, they’ve been wandering their way into our hearts, too.

Geneticist Carlos Driscoll says that cats “just sort of domesticated themselves," content to meander about the farms some 12,000 years ago, catching mice, rats and other pests that destroyed the farmers’ crops. Cats essentially became protectors of the harvest and an important part of agricultural life for humans.

It’s likely that cats chose to become a part of human life and actually allowed themselves to be domesticated. People probably weren’t going out into the wilderness to forcibly capture cats and keep them as pets. It’s hard enough to keep a cat inside our homes today without some type of barrier. Imagine trying to keep a cat inside a house 12,000 years ago!

Now, fast forward a few thousand years. When people started traveling to distant lands, their cats came with them. On the island country of Cyprus, the preserved remains of a 9,5000-year-old cat were found buried alongside its human. Cats aren’t native to Cyprus, indicating that people brought their cats with them. Cats were steadily becoming our close companions.

It was in Ancient Egypt, however, when early domestic cats were at the pinnacle of society: almost rivaling the undeniably adorable power of our modern-day Internetz gods.

A treasure trove of feline artifacts from some 4,000 years ago reveals that cats were a sacred part of everyday life in Ancient Egypt. Cats were venerated as symbols of Bast, a goddess of protection and fertility, and other deities like Sekhmet and Ra. Countless statues and hieroglyphs of cats reveal their roles in Ancient Egyptian life; And carefully mummified cats buried alongside the great Pharaohs indicate that Egyptians took great care of their companions, ensuring they would be safe even in the afterlife.

​Even with all the evidence at hand, it’s difficult to tell if we domesticated cats or if they just trained us really, really well to take care of the

More on Cats in Open Horizons

Do our cats judge us?
Cats as Spiritual Teachers
The Bible as a Cat Lady: A Poem and a Thought
Open Horizons