​A Colleague Retires
Reflection after his Concluding Lecture
​
by Jay McDaniel 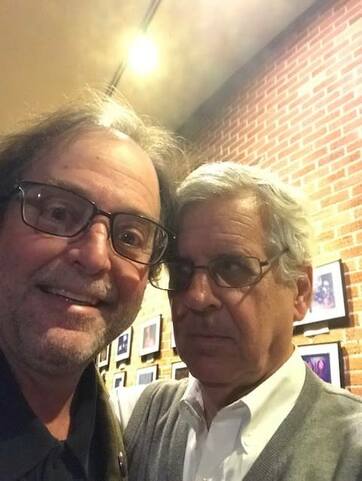 Danny Grace and Jay McDaniel
Danny Grace, Professor of Theatre Arts at Hendrix College, gave his concluding lecture on April 6, 2019.  He is retiring into something beautiful.

His talk was on the importance -- well, actually, the absolute primacy -- of theatrical events and stage production for the future of the world.

Danny and I co-taught a course to first year students called Art and Spirit. I teasingly explained to him that I always had to keep my eye on him, lest he transform students into mirror images of his own vivacious. intense, spiritually-engaged, let there be craziness self. Really now, don't we need some Calvinists, too?

Early in his time at Hendrix, Danny brought Allen Ginsberg to campus and arranged for the poet to visit my World Religions class! Ginsberg spoke to us about living "life" with fullness and passion. He and I had lunch afterward in the cafeteria, along with a friend of Ginsberg's from the punk group the Fugs. .

That night Ginsberg read from Howl, including the line about people "who passed through universities with radiant cool eyes hallucinating Arkansas and Blake-light tragedy among the scholars of war," We, in Arkansas, were honored to have been hallucinated in such a loving way. We, too, were against the scholars of war.

Ginsberg's visit was an Event. But what isn't? Always Danny impressed upon me the importance of live theatre as an "event" in which, to quote Whitehead, "the many become one are are increased by one." I was predisposed to think in terms of events because, after all, Whitehead's is an event ontology. Being doesn't "be." It happens. Truth be told, Danny happens, too. Danny is an event.

Danny's specialty at Hendtix was set design, with particular focus on lighting. He was deeply influenced by the Swiss theoreticial of light in set design, Adolphe Appia. I wrote a little piece on Appia called the Unity of a Theatrical Event, dedicated to Danny.  It's about process theology and theatre.  You'll find it below.

Danny was -- and is -- a light for me. Not sure who turned it on or where it comes from. Kind of mysterious. Gotta keep your eye on it. 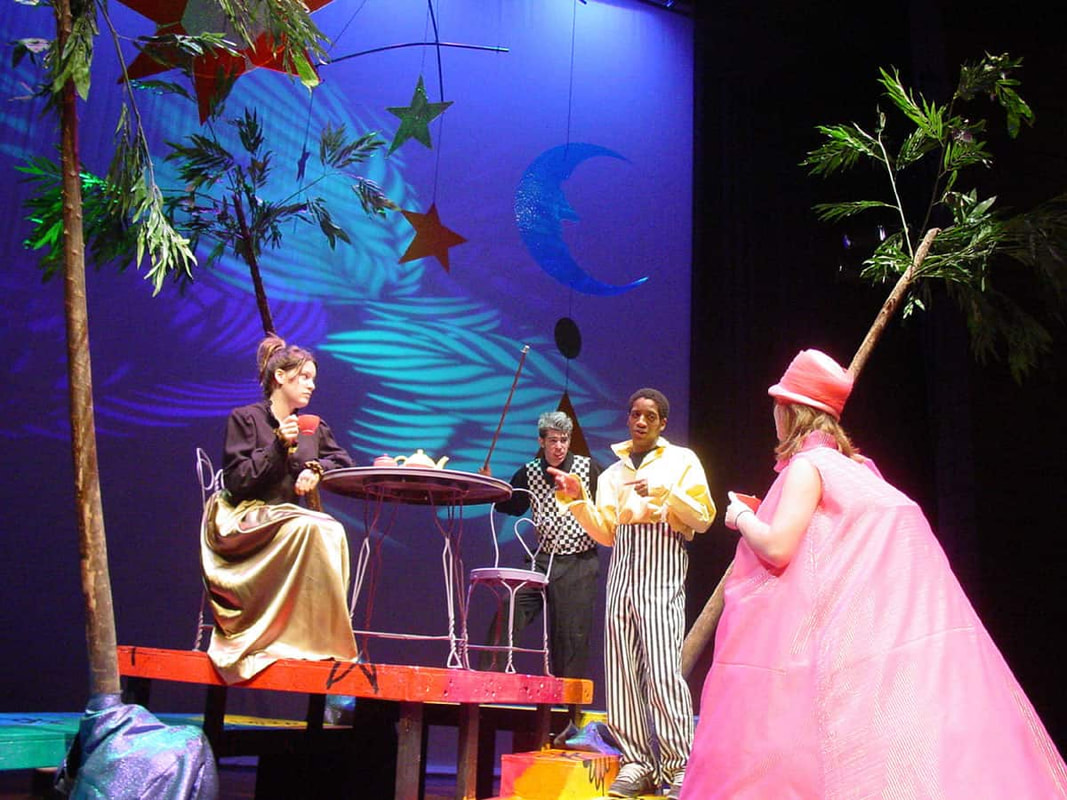 The Unity of a Theatrical Event

The unity of a theatrical event is not a substance that endures through time, but rather an event that moves through space  An event is a happening or an occurrence.  It is more like a liquid than a solid, more like the movement through time of live music than like, say, the apparent stillness of a landscape painting.

I say apparent because, in truth, landscape paintings are not still, either.
​
At least this is the way those of us influenced by Asian traditions and the organic philosophy of Alfred North Whitehead see things.  We believe that all things are pulsating and moving in their own way,  This includes hills and rivers and mountains and trees; this includes paint on a canvas; and this includes the props in a theatrical performance.  It is all energy.

But the unity of a theatrical event is a special kind of event, because it is an event in which many people participate simultaneously.  It is moving spectacle that is seen and felt and heard by actors and audience alike -- albeit, and happily, from different points of view at the same time.

And if if truth be told, the actors are seeking this as well as the audience. In a theatrical performance the differences between actor and audience are not divisive.  This is because, as the spectacle unfolds, the actors feel the presence of the audience and the audience feels the presence of the actors.  In the language of Whitehead, they prehend one another and their prehensions partly determine the quality of the performance. Indeed, in many instances of theatre at its best, the very dichotomy between actor and audience falls away, as it does in liturgy in religious ceremonies.  The performance becomes a mass in which, at least for a moment, everyone becomes a priest.

To be sure, the actors have a special role.  They are, as it were, leading the dance.  But the dance is the spectacle itself and it takes all parties are necessary for the spectacle.  A performance without an audience is is like someone trying to do a tango alone.  Without a partner there is no tango.  The actors need the audience as much as the audience needs the actors.

The decisions made by actors and audience are part of the event as well.  They are not entirely predetermined by the past, which means that all theatrical performances have an improvisational quality.  Even if the script is precisely determined and the staging precisely specified, there is an improvisational quality in how the lines are spoken and how the audience responds.  In a theatrical event as in life, the future is open and creativity is key.  It does not matter how many dress rehearsals have occurred. every performance is new.

The stage and staging are events, too.  The stage consists of the props, lighting, and sound effects.  We might think of props as static, but in fact they are dynamic, pulsing with an energy of their own.  Even as they might sit still for a moment, their very sitting is an activity that takes space and makes space.  The making of space is an activity and it can be felt by actors and audience alike, that is, by all the performers in the performance.

At least this is how process philosophers see things.  They - we -- believe that physical matter is not mere inert stuff, but is instead dynamic, filled with creative energy.  From a process perspective, props vibrate in their own ways.  Part of this unity of a theatrical event is for all participants to feel the vibrations of the props.  In their making of space, the props are happenings.

The lighting is crucial, and this is where Adolphe Appia was a genius. Working at a time when electrical lighting was first coming into existence, he realized that lighting could be moving through time and that lights could be placed in multiple locations.

While it is obvious to all of us that light in itself is an event, Appia realized that the event of lighting could be key in enabling the theatrical event to occur.  With Appia, light became a character in the drama, playing a deeply supportive role. His use of shadow and light in variable ways made light a dance in its own right.

But Appia knew, as ought we all, that light and sound go together.  HIs aim was to weave lighting and sound effects into a single whole, so that the unity of a theatrical event is synesthetic: a weaving together of aural events and visual events into a single, ongoing event, focusing on the actors.  And for him the props themselves were not meant to be mere representations of external scenes but rather archetypal happenings revealing energies within the depths of the universe and, of course, the depths of the human soul.  In Appia these archetypal happenings are part of the unity, too.  They are part of the many that become one in the unity of the theatrical event and they are ways in which actors and audience alike can participate in something deeper and wider than themselves.

There's a lesson for life in all of this.  In so many ways the whole of our lives is akin to live theatre and live theatre is an occasion for reflecting on this fact.  Isn't every moment of any person's life a relational activity in which he or she is responding to props and costumes, landscapes and archetypes, in concert with others who are also responding?  And aren't there times when we are in fact actors on the stage and other times when we are audiences?  But isn't it true that, whether as actors or audience, we make decisions, moment by moment, that influence others a well as ourselves in ways both helpful and harmful?

If this is the case, then live theatre is itself sacramental: that is, a window through which the light of life shines in its splendor and catastrophe, its horror and its beauty.  Life theatre is an invitation to mindfulness: becoming aware of life as it is, as it has been, as it can be, and perhaps, in some instances, as it should be.  Should is a hard word, but we Whiteheadians do not hide from it.  At the very least we should be mindful of the whole of life, not hiding from the horror and the beauty.  Only after we have seen and felt the various truths of life, illuminated by light, can we respond with wisdom and compassion in our daily and corporate lives. That response -- deeply moral and deeply aesthetic -- is the fruition of live theatre and a continuation of the performance.  It is live theatre, too.

Is there a unity of the universe -- an Event within yet beyond all events -- which itself is the gathering of many into one?  Is there something like a divine reality, filled with archetypal patterns and yet also composed of the manyness of the world?  If so, this Event would be similar to what Whitehead calls the consequent nature of God.

Given this way of thinking it would seem that even the mystery at the heart of the universe -- even God -- is a theatrical event, albeit with a life of his or her own.  If we human beings are subjects whose very subjectivity is composed of many events, then is it possible that the universe as a whole is likewise an event whose very subjectivity is composed of many events?  Could the lure toward beauty that we experience within our own lives be one way that we experience the Event within whom all events unfold?  Can live theatre at its best be liturgy in which we respond to something divine as well as human?

These are questions best left for each person to address, to the best of his or her lights, given the dramas at hand.  There are no simple answers either way. But perhaps live theatre, in its own way, is an act of faith: faith in the truth that theatre illuminates and the possibilities it can open.