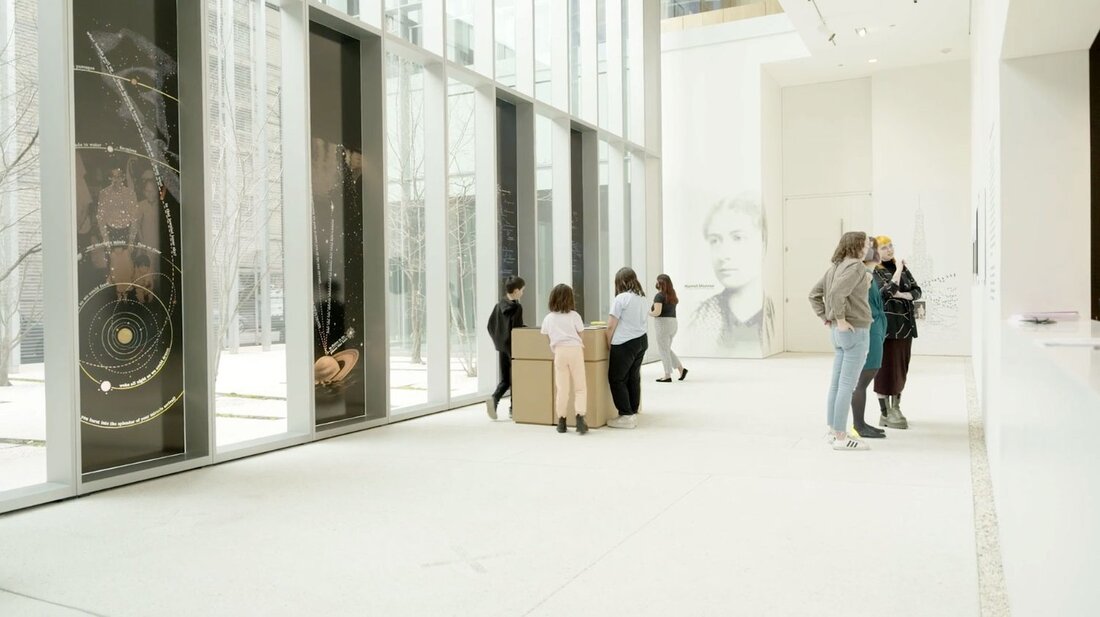 From the video introduction to the exhibition Monica Ong: Planetaria.

The Visual Poetry of Monica Ong

Social Justice in the Heavens

"Monica Ong’s exhibition Planetaria, on view at the Poetry Foundation in Chicago, opens a universe of visual poetry to readers. The term planetaria refers to models of the solar system, and visitors should come prepared for not only celestial travel but also political dethronement, as Ong neutralizes China’s astronomical patriarchy by repopulating the heavens with a feminist gaze.

​For example, Ong’s Purple Forbidden Enclosure explores the tendrils of power that link China’s distant stars to its earthly governance. The broadside’s title references one of three celestial universes in ancient Chinese star charts. In that universe, purple represents the North Star as well as the heavenly abode of the Celestial Emperor, with the surrounding stars and constellations designated as the Purple Forbidden Enclosure. As above, so below: for more than 500 years the Forbidden City in Beijing served as a home to (terrestrial) emperors and the seat of China’s political power.

*
​
This is Ong’s magic, to anchor the reader in a present moment that is also timeless. Even as a gazer searches overhead, she can imagine centuries of long-ago gazers’ faces tilted similarly upward, searching the night sky for meaning. Visitors to Monica Ong’s Planetaria will encounter glittering starscapes and resonant language, but equally important, Ong’s poetic incursions reveal how the star charts that locate and assign meaning, map our societies as well. Following Ong as truthteller, perhaps readers will interrogate the assumptions that map their own identity, while comforted that the stars will remain overhead in abiding witness to every voice raised."

Social Justice in the Heavens
​

Images from the James Webb telescope give us new eyes for the heavens and, a new experience of transcendence. What is transcendent is the universe itself, with its trillions upon trillions of galaxies, many of which have planets on which, in all likelihood, life is present.

On earth, our own experience of life is deeply gendered. No matter how many genders we recognize, we categorize our world in gendered terms. The same applies to the heavens. When we gaze into the heavens, we do so with eyes shaped by our own historical experience. Yes, the stars and galaxies present themselves, but we interpret what they present with gendered eyes.

​Often those eyes have been male. The stars have been patriarchal in the sense that their heavenly orders have mirrored and reinforced patriarchal forms of human organization. As above, so below: goes the saying. God sits on a heavenly throne, and the emperor sits on an earthly throne.

The visual poet Monica Ong helps change that. She rewrites the heavens with a feminist gaze. Planetaria invites us to imagine a new and different kind of world, a post-patriarchal world, which can be good for people of all genders. Her practice, visual poetry, is her medium for exploring the possibility.

​In the spiritual alphabet, "J" is for justice and “I” is for imagination. Ong shows that, if we are to imagine new worlds, it helps if we imagine ancient skies in new ways. Planetaria is an invitation to that kind of imagining. Call it social justice in the heavens. We do not know whether life on other planets is gendered. We may never know. We are not even sure what gender is on earth.

But what we do know is that social justice begins with mutual respect and the inclusion of all voices. Imagine that the heavens unfold inside a sky-like Womb whose nature is compassion. One earthly prophet, Jesus of Nazareth, beckons us to do with will of God on earth as it is in heaven. Ong shows that, if we are to do this, our image of heaven will need re-imagining, too.