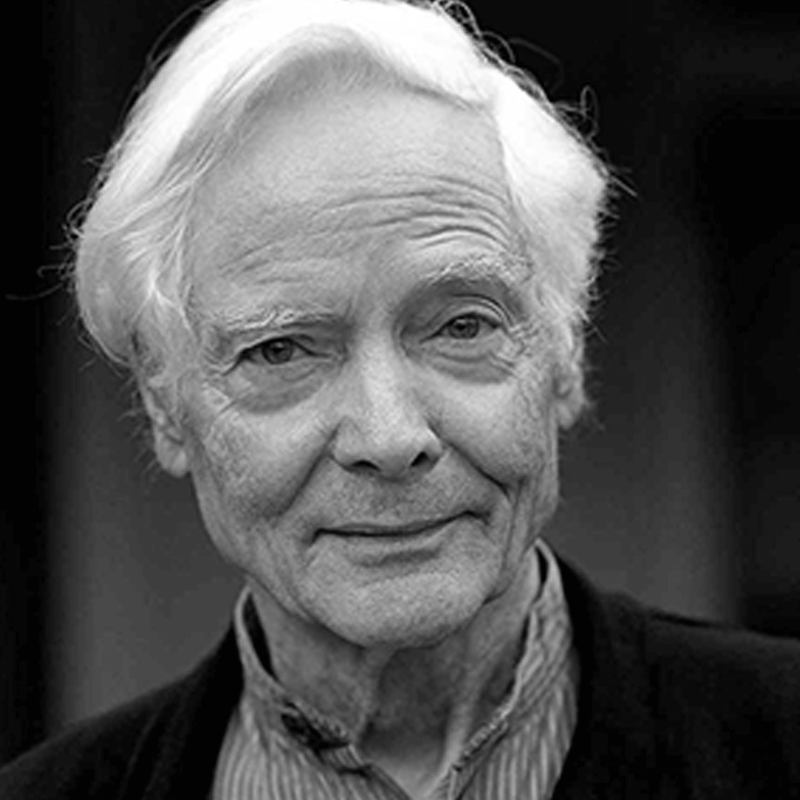 ​
​Human discernment does not require the standard process claim that God constitutes an initial aim for us, only that the future is alluring.

To the New Year

​
W.S. Merwin (September 30, 1927 – March 15, 2019) was an American poet who wrote more than fifty books of poetry and prose, and produced many works in translation. During the 1960s anti-war movement, Merwin’s unique craft was thematically characterized by indirect, unpunctuated narration. In the 1980s and 1990s, his writing influence derived from an interest in Buddhist philosophy and deep ecology. Residing in a rural part of Maui, Hawaii, he wrote prolifically and was dedicated to the restoration of the island’s rainforests. Merwin received many honors, including the Pulitzer Prize for Poetry in 1971 and 2009; the National Book Award for Poetry in 2005, and the Tanning Prize—one of the highest honors bestowed by the Academy of American Poets—as well as the Golden Wreath of the Struga Poetry Evenings. In 2010, the Library of Congress named him the 17th United States Poet Laureate.

The Future as Untouched and Still Possible
​

The Future as the Arrival of Novelty

I write this in the first days of 2023: the beginning of a new year. What is beginning?  It is a new year as measured by human calendars, to be sure; but it is also an arrival of that mysterious reality we call the future. Some speak of the future as created by the universe pure and simple. I disagree. I think the future arrives. It is the arrival of novelty as an actualization of what Merwin calls the untouched but still possible. Sometimes we are agents in the arrival, helping give birth to it; but if we consider the way it arrives in the ongoing histories of plants and animals, hills and rivers, bacteria and viruses, stars and planets, we rightly recognize that its arrival far surpasses our agency.

And mysterious it is! We experience the future as something that is always beginning, with every new sunrise and sunset. Thus, the future has a certain dynamism to it. It is wrong to think that dynamism occurs only in the present in its immediacy, or only in the past as it influences the present. The dynamism includes the emergence of new things that did not exist before they emerged. Whitehead suggests that the universe is a creative advance into novelty. The future is the novelty as it arrives in the present; and, as I suggest, it is a plenitude of potentiality in which that novelty resides prior to its arrival. The future has two sides: it is (1) the perpetual arriving of novelty and it is (2) that which has not yet arrived but can arrive: the untouched but still possible.

New Years Happy and Sad
​
This future is felt in a special way on the occasion of a formal New Year. Such a year is anticipated in many different ways relative to different contexts. We can feel it as an object of despair, fear, indifference, anticipation, or hope. Many people in the world experience a coming year with dread, anxiety, and sadness. There is nothing happy about it. They might wish the New Year would never come. They might wish that the past decade had never come. The future does not promise happiness. It promises only difference, only novelty. What is will always be replaced by what can be, This replacement is the arrival of the future.

The Future as a Plenitude of Possibility

What, then, allures us? What is the future when experienced as an object of hope? Some say it is nothing at all, that future contingents are unreal apart from being imagined. On this view the word "future" has no referent, and the language of an alluring future is deceiving, as is for that matter the language of a threatening future. There is nothing to allure or threaten. Others say that the alluring future is an already-existing script, residing in the mind of God, which unfolds according to a pre-determined plan. The word "future" points to the meticulous or detailed plan in God's mind. It is God's providence.

Merwin's poem invites us to consider a third option: that the future has a certain reality of its own that is not reducible to human projection but that its reality is different from the actual world. It is plenitude of possibility which is real but not actual until actualized. This plenitude is not a sentient being; it does not make decisions. But it is not simply nothing. It is something more vibrant and mysterious, something untouched but still possible.

What does untouched mean? Some might say that it means uninfluenced by the world, in which case we might disagree. We might argue that the alluring future will have been touched or influenced by the present when it happens, because present decisions partly determine what will happen. When the future arrives, it will be touched not untouched. Nevertheless, Merwin's poem may have a point, Prior to its arrival, it is untouched. This corresponds to the intuition that more is possible than is actual. The untouched future is this more-ness. It is the plenitude of possibility.

But the word untouched means more than un-influenced. To the poetic mind the word also evokes a sense of freshness and novelty, innocence and pristineness: something untrammeled by the violence of the world. It is pure. Recall Whitehead's idea that there exists in the mind of God a realm of pure potentials (Whitehead's phrase) that may or may not be actualized by entities in the universe. These potentials can be considered apart from their actualization, as objects of the intellect in their own right. In this sense and this sense alone, they are pure. They are innocent of actualization. For Whitehead these potentials are non-temporal; he calls them eternal objects. They are not created by God; they are co-eternal with God and constitute a plenitude of possibility from which God draws in luring the world, as best God can, toward healing and wholeness, beauty and truth, harmony and intensity.

The Fresh Presence of the Still Possible

Whitehead adds that eternal objects are pure potentials for the specific determination of facts in the world, and that even if they have never been actualized in any world, they are still available, as possibilities, for actualization. In the words of the poem, they are still possible.

What, then, is a happy New Year? I suggest that it is the fresh presence of the still possible. If we are fortunate enough to live in situations when we can feel the coming of a New Year this way, our responsibility is to pay attention to what is already good in the world and to discern the particular possibilities that truly bring hope to the world. It is to tap into the plenitude of possibility as best we can, by imagining and then helping nurture a world that is good for people, other animals, and the earth.

A truly happy New Year has a religious side. Not the religion of dogma and authority, but the religion of gentleness and hope. It does not hide from what is evil but it sides with what is good, perpetually attentive, in a Zen-like way, to the fresh presence of the still possible. In 2023, but in all years, may this presence arrive in ways that bring forth goodness. And may we be midwives to the nurturance. Our actions in the world, guided by attention, can be part of the arrival. The future needs us.

He won nearly every award available to an American poet, and he was named U.S. poet laureate twice. A practicing Buddhist as well as a proponent of deep ecology, Merwin lived since the late 1970s on an old pineapple plantation in Hawaii which he has painstakingly restored to its original rainforest state. Poet Edward Hirsch wrote that Merwin “is one of the greatest poets of our age. He is a rare spiritual presence in American life and letters (the Thoreau of our era).”

Merwin moved to Hawaii to study Zen Buddhism in 1976. He eventually settled in Maui and began to restore the forest surrounding his former plantation. Both the rigor of practicing Buddhism and the tropical landscape greatly influenced Merwin’s later style. His next books increasingly show his preoccupation with the natural world. The Compass Flower (1977), Opening the Hand (1983), and The Rain in the Trees (1988) “are concerned not only with what to renounce in the metropolis but also what to preserve in the country,” noted Ed Hirsch in the New York Times. Many of the poems in the last volume “immerse themselves in nature with a fresh sense of numinousness,” said Hirsch, while also mourning the loss of that nature to human greed and destruction. Merwin has continued to produce striking poems using nature as a backdrop.

Merwin on Moving beyond Anger
​

​Merwin was once asked what social role a poet plays—if any—in America. He commented: “I think there’s a kind of desperate hope built into poetry now that one really wants, hopelessly, to save the world. One is trying to say everything that can be said for the things that one loves while there’s still time. I think that’s a social role, don’t you? ... We keep expressing our anger and our love, and we hope, hopelessly perhaps, that it will have some effect. But I certainly have moved beyond the despair, or the searing, dumb vision that I felt after writing The Lice; one can’t live only in despair and anger without eventually destroying the thing one is angry in defense of. The world is still here, and there are aspects of human life that are not purely destructive, and there is a need to pay attention to the things around us while they are still around us. And you know, in a way, if you don’t pay that attention, the anger is just bitterness.”