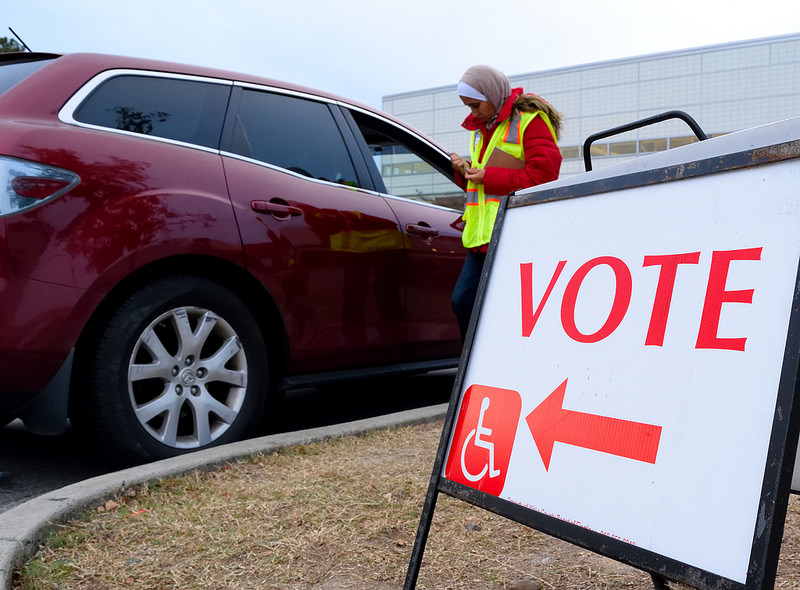 Rabbi Bradley Shavit Artson
Dean, Ziegler School of Rabbinic Studies, American Jewish University
Originally Posted as "​Your Non-Partisan Guide to Voting for Biblical Values" in Huffington Post ​ 10/30/2012 04:27 pm ET | Updated Dec 30, 2012
Seems these days that some politically motivated pastors are attempting to direct the way their congregants vote by selectively lifting some occasional biblical verses out of context and then pretending that this reflects a self-evident biblical mandate in politics. Those red-letter issues — abortion, dismantling a welfare state, keeping women marginal and passive, fostering a ruthlessness version of the market economy, penalizing non-citizens who live and work among us, opposing workers’ self-determination and safety, exploiting the environment for short term gain, relying on greed as the primary social engine, treating non-human life as a mere tool for human benefit, legislating social privilege for some while relegating most to marginal status — are routinely presented in houses of worship as simple Biblical values, what any biblically motivated person must advocate and advance.

The problem with this partisan deception is two-fold. The biggest outrage is that these distortions poison the planet, oppress the bulk of humanity, desensitize us to each other’s pain, struggles and humanity, and doom us to a civilization dominated by ego, violence, bullying and vicious self-interest. The secondary problem is that a simple reading of the Bible, while indeed containing passages that can be isolated and caricatured into supporting this radical and divisive agenda (see some of the comments of some of the respondents below), presents an overarching demand for us to advance human dignity, celebrate creation and show our love for God precisely by working for justice for the alien in our midst, the weak, the oppressed and the marginalized.

Someone has got to speak out for the better Bible agenda — the one that heeds God’s lure toward tzedek u-mishpat (justice), shalom (peace, harmony, integration) and a society based on hesed (acts of lovingkindness).

In the spirit of full disclosure, I need to clarify that when I refer to the Bible, I mean the Hebrew Scriptures, what Jews call Tanakh. I am no expert in the Greek Scriptures (Gospels, Epistles and Revelation) and it is possible that they perhaps might reflect an ethics of disdain, stinginess of spirit, disregard for the poor and marginalized, privileging the haves over the have-nots. But that sure isn’t what I’ve heard about Jesus.

Abortion is not murder.

Turns out there is only one biblical passage that deals directly with the forced termination of a pregnancy, Exodus 21:22. When two men fight and the pregnant wife of one tries to interfere to protect her husband, and she is struck so that she miscarries early, the penalty if deliberate is not death (which it would be if the Bible considered that abortion to be murder), nor even fleeing to a city of refuge (which is the Bible’s provision for involuntary manslaughter). Instead, the penalty assessed is but a monetary fine, the kind of punishment the Bible imposes for loss of limb, but not loss of life. Sorry, folks, abortion may still be murder, but the Bible says it’s not.
​

A welfare state is one in which the central authority mandates ways of transferring wealth from the rich elite to create a safety net for the most poor. Providing supplies of food, housing, education and even medical care are all aspects of a modern welfare state, and all are mandated by biblical law and practice. The wealthiest are instructed to tithe their harvests at a mandated rate and the poor are legally entitled to a percentage of the produce to feed themselves and their families. Rather than considering financial donations to the poor voluntary (the root of “charity” is caritas/care), the Bible mandates such support and calls it “tzedakah/justice.” Ancient Israel achieved near universal literacy (among males) by creating an extensive educational system available to all regardless of income. And the few biblical tales of those afflicted with tzara’at, a skin disease, shows them visited by the Priests regardless of ability to pay. Healing is an obligation (Exodus 21:19). The biblical covenantal ethic obligates us because we are all in this together.
​

We must advance the dignity and engagement of women.

While it is clear that biblical views of gender and equality were significantly different than those of contemporary Western democracies, it is nonetheless true that Israelite women enjoyed legal protection, rights of ownership and inheritance, and a religious voice that was in advance of their contemporaries in Mesopotamian, Egyptian and Eastern Mediterranean cultures. Israelite women are portrayed as prophets and as judges, leading troops to war and imposing judgment on the population. Israelite women had the right to decline marriage proposals and there was a concept of rape as a crime (even within marriage!). Women even persuade God to expand the laws of inheritance to provide for daughters along with sons. And Israelite women had active roles in the economy and in the financial support of their families. The Matriarchs of Israel, the prophet Miriam, the judge Deborah and the convert Ruth all refute the hijacking of biblical rhetoric to cover for contemporary sexism, and shine as beacons of women of wisdom, dignity and power. God, it seems, loves strong women!
​

Our economy should be free and regulated.

Far from advocating a no holds barred economy, the Bible presents a modified free market, in which the general transactions are market driven, but there are limits to the amount of profit one can earn, limits to when and if interest may be charge. Greater wealth creates obligations for greater contributions to the Temple and society at large. Specific industries are regulated in terms of zoning, standards and product. The Bible presents an economy that benefits from a free market made better through regulation and mandates. We should do the same.
​

Non-citizens should have equal protection under the law.

The single most repeated instruction of the Bible is “you shall have one law for you and the ger/alien in your midst.” Stranger, in the Bible, doesn’t mean someone you don’t know, it means a non-citizen, what some today call an illegal alien or undocumented worker. The biblical mandate is clear and unequivocal: They get the same laws as citizens do. Indeed, we are commanded to love the ger/alien (Deuteronomy 10:19). What part of “God said it” are you still resisting?
​

All people are entitled to accommodations and dignity to be able to participate fully.

Not only the ger, but all people deserve to be able to participate fully in communal life. Several of our greatest religious heroes had physical challenges (Moses’s speech impairment, Jacob’s limp, Isaac’s blindness) and were sometimes selected because of those extra obstacles. All Israelites were allowed to bring sacrifices to the priests, and all were able to prophecy when called. One law for all meant not only a single standard, but providing those additional assists to make every human’s beauty and participation visible. For this reason, the Bible prohibits placing a stumbling block before the blind or insulting the deaf (Leviticus 19:14). That stirring mandate for special accommodations to meet fundamental human needs concludes with the phrase “you shall revere/fear the Lord your God.” Perhaps our reverence for God is only apparent in how we create real access for those with special needs. Someone remind Anne Coulter.
​

We all benefit when we strengthen workers’ self-determination and safety.

Biblical legislation on behalf of workers stands heads and shoulders above other legal systems and blazes a precedent for us to emulate today. Like weekends off? Thank the Bible with its visionary establishment of the Sabbath — a mandatory day of rest for every member of society regardless of class, wealth or status. Like being paid on time? Thank the Bible and its requirement to pay workers their wages regularly. Worker’s safety, ability to refuse involuntary labor (including the right to terminate a contract), ability to pause for eating and reasonable rest — all these are part of the vision of covenantal participation that includes labor, management and owners in a system of human dignity, communal benefit and profits generated within a context of larger human values.

With each new day of creation, God assessed the work and weighed in that it was “tov/good.” At the conclusion, God evaluated all creation as “tov meod/very good” and assigned to humanity the task of being responsible stewards in the management of creation and the tending of the garden. Those rules continue in the establishment to let the land lie fallow every seven years, and every 7x7 years to add a Jubilee year to let the land rest. We are required to restrict our consumption of animal flesh to a few select species, slaughtered within specific and humane ways (hoisting and shackling is not required by kosher slaughter and is an atrocity). We are taught to love a particular land (Israel) as a model for loving the entire planet, and even biblical war legislation provides for taking trees into account. The Bible is the first Green book!
​

We may not rely on greed as the primary social motivator.

Rather than surrendering to a pessimistic and destructive ideology based on self interest and greed, the Bible evaluates the human heart more positively, noting that we are made in God’s image and summoning us to rise to a life of meaning through building communities of inclusion and justice. Small wonder, then that the two reasons given for commandment after commandment is to remember the act of creation (a moment of gratuitous love freely bestowed) and to remember the exodus from Egypt (an act of liberation freely bestowed). We are most Godlike when we too give love freely and act to liberate the downtrodden and despised and to bring today’s Pharaoh’s down.
​

Honoring and caring for non-human life.

Humans may be the only self-conscious, verbal creatures, but we are embedded in a web of life that is a reflection of creation too. Biblical law requires us to extend the shalom of the Sabbath to our animals: They may not plow or work on the Sabbath, and we are not allowed to trap or hunt on the Sabbath, extending the beauty of the Sabbath to non-domestic animals too. Biblical and Jewish dietary laws liberate most animals from the danger of being human food, and the Bible notes at its outset that each living species has its own genius and role to play, each le-minehu/after its own kind. Even language of divine mystery is presented in terms of the horse, the hippo, leviathan and other wild creatures (in Job and Psalms). We must translate those biblical values into our own policy choices today.
​

Favoring diplomacy and cooperation over glorified war and premature exercise of coercive power.

The Bible is not a pacifist book. There are times when the only way to save the weak is with power, and the only way to oppose tyrants is with war. But often humans are drawn to power and bloodshed as a first option, rather than as their last. The blood thirst that has marked our species from its beginnings is now a global threat. Small wonder that the Bible portrays the end of days as an age of shalom/peace, and demands that even with in a just war, we are commanded to first pursue negotiations and cooperation as a means to avert bloodshed. Jewish tradition reminds us that “shalom” is one of God’s very names.
​
If you are one of those voters who wants to be sure to vote in accord with the central motivating values that permeate the Bible, then I invite you to use this list as you assess each candidate seeking public office. Only those who most closely approach these ancient and sacred standards should receive your vote.
Open Horizons