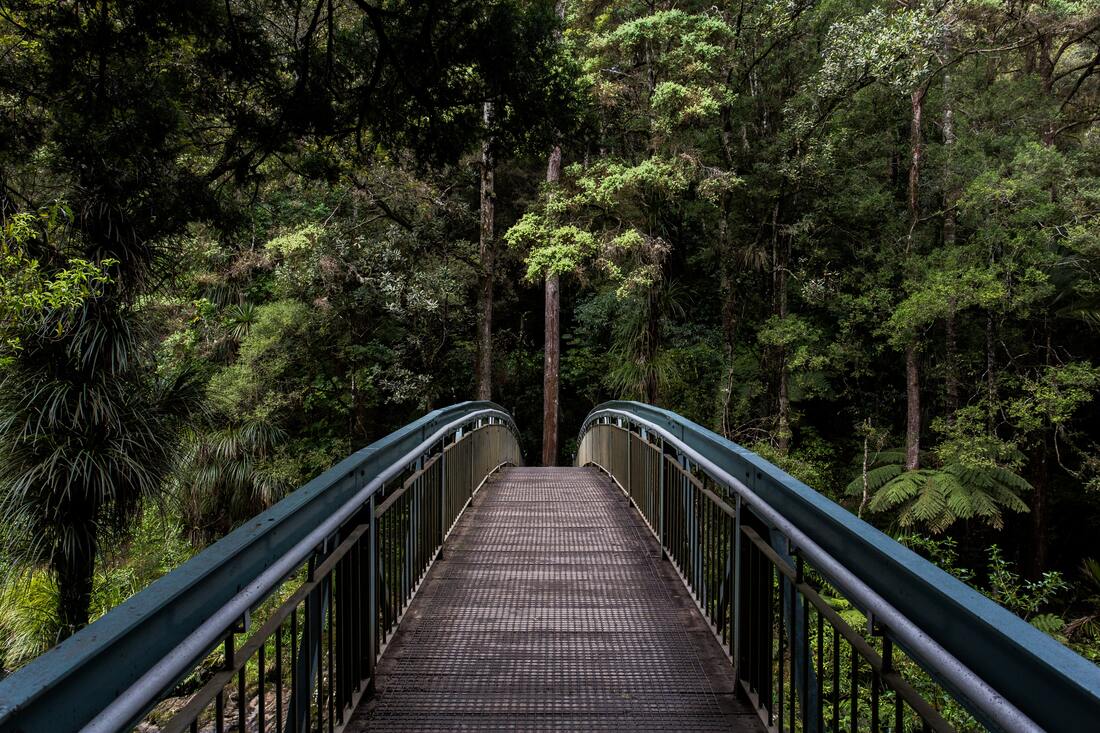 Photo by Tim Swaan on Unsplash

​An Open and Relational (Process) Reflection

What "grows" when we grow old?

One thing that grows is our personal past, our past actual world.  Growing old is a little like living in a house in which new rooms are gradually added over the years.  Some of these rooms are of our own making.  They are the decisions we've made and experiences we've undergone for which we feel and are responsible, which are now deposited in our unconsious (and sometimes conscious) memories.  Others are made by other people and the natural world.  They are what has happened to us that we may not have had much control over.  Either way these experiences, willed and unwilled, become part of our personal past.  What grows when we grow old is the size of our personal past.  We are older because there is more to our past this year than there was last year and, for that matter, today than there was yesterday.

Another thing that grows in the later years of life is our need for home repair.  Whether or not we are healthy, there is a natural process by which, over the years, our bodies become less able to function in ways that were formerly possible.  We may suffer from disease or just a gradual weakening.  Either way we are less able to do some things physically than we were in the past, and the same goes for our mental capacities.  We may not be as sharp, or as quick, or as mentally able than we were in the past.  We may experience the slow (or sometimes) rapid emergence of what the world calls dementia.

Still another thing that grows when we grow hold is much happier.  We can grow in wisdom and spiritual aliveness.  By wisdom I simply mean that we can gain perspective, we can learn to see things in new and wider ways that take into account a bigger picture; we can come to a realization that some of our values in earlier years were not so important and perhaps also superficial; and realize that other values are really deeper and much more important to us.

Another important part of wisdom in growing old lies in accepting mortality, and sometimes even appreciating it.  We can learn to view physical death, at the end of a long life, as something that will happen to all of us, as a form of closure and, I believe, transition to another plane of existence.  We can learn to think of death as a friend of sorts: as, in the words of Francis of Assisi, brother death.

And by "vitality" I mean, not physical vitality but rather "spiritual" vitality: a growth in emotional intelligence and the spiritual virtues.  What are these spiritual virtues?  Compassion, a sense of wonder, listening, gratitude, playfulness and humor, courage, a sense of mystery, an appreciation of meaningful connections with friends and family, and in some instances service to the world.  This "service" may or may not be of an active or civic nature.  It can take the form of volunteering, but also just a simply listening to others in kindly ways, without judgement.

Let it be noted that neither of these two forms of growth - growth in wisdom and growth in spiritual vitality - are inevitable.  They are possibilities for us, but we can be closed to these possibilities, trapped in less desirable cycles from the past.  We can resent our growing old, or be embarassed by it because we are no longer "young."  We can valorize a time in our past when things were better, and then live with resentment that it cannot be reclaimed.  This is where, for process theologians, the deep Friend to life comes in.  For process theologians God is indeed a friend to life and a friend to aging.  God does not reside in the past as a paradise lost, but rather in the present and future as incoming of fresh possibilities for living here-and-now and in the future.  In process theology we speak of them as 'initial aims,' but the language is not important.  What is important, for all who age, is to trust in the availability of fresh possibilities, whatever the circumstance.  This trust, whether or not verbalize and, for that matter, whether or not joined with a conscious belief in God, is itself faith.  Faith is trust, not certainty.  Joined with this can be a trust that, in ways not easily understood, everything is well in the sense of becoming part of a larger harmony - a Harmony of Harmonies, to quote Whitehead - where the past does not really fade away, where all is fresh.

And what of people who are in situations where they cannot "age gracefully" on conventional grounds.  What of people with severe dementia, for example, or with mental illness, or with terribly painful diseases for which there is not easy cure, or who are deeply afraid of death itself, or who are riddled with guilt and conflict and unresolved tensions.  As a process theologian I believe that, for them, too, God is present through fresh possibilities and as an eternal Companion, a harmony of harmonies, to their suffering.

And God is present to us in possibilities for being with them in their pain and for recognizing their dignity, sometimes presented to us in new and unfamiliar ways.  A person with severe dementia, for example, can indeed grow in the very onset and development of her dementia: becoming the self that she or he can become, and, sometimes, becoming a better self than she was.  I think of a good friend with Alzheimer's who now smiles more, and laughs more easily, with help from medication and support from others.

What grows when we grow old?  Sometimes, with will and grace, we do, in ways never expected.

How We Age: A Doctor's Journey
​Into The Heart of Growing Old

By Marc E. Agronin
​
A wise and empathetic overview of aging
in America and different ways to look at it. 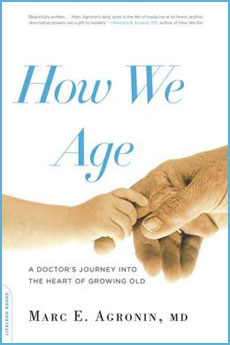 Marc Agronin is a board-certified adult and geriatric psychiatrist currently serving as the Medical Director for Mental Health and Research at Miami Jewish Health System. His articles have appeared in The New York Times and many other publications. Agronin winces at the rampant examples of what Robert Butler called "ageism" in America where the negative side of growing old — decline, loss, illness, and death — is emphasized. This is abetted by a multi-billion dollar industry which has grown by leaps and bounds by peddling anti-aging products and clinics. People want to look younger, and so the quest for the Fountain of Youth continues. In this enlightening book, Agronin sets out to offer a more balanced perspective on growing old. He writes:

"We imagine the pains of late-life ailments but not the joys of new pursuits; we recoil at the losses and loneliness and fail to embrace the wisdom and meaning that only age can bring."

Attending a seminar on Erik Erikson's eight stages of the human life cycle, Agronin is pleased to see the emphasis on balance in late life, which itself is a form of wisdom. The author sheds some light on the resistance to life by one of his patients who reminds him of Bartleby, a character in a famous short story by Herman Melville.

Other elderly people he has worked with provide him with insights into memory, empathy, vitality, and independence. Gene Cohen exposes the myth of cerebral decline in all elders and posits that the brain can resculpt itself in later life. The same writer suggests that older men and women develop a "social portfolio" which contains all their past assets along with new ventures which bring deep gratification and meaning.

Many religious teachers have emphasized the positive side of aging. Abraham Joshua Heschel, the great Jewish sage, is quoted as saying that this stage of life is "rich in possibilities to unlearn the follies of a lifetime, to see through inbred self deceptions, to deepen understanding and compassion, to widen the horizon of honesty, to refine the sense of fairness."
​
As more and more people head toward living for 100 years, others are felled by what Agronin calls the "Four Horsemen of Old Age" — depression, dementia, delirium, and destitution. Every elder is given a chance to feast at the great table of life and then to rise up in hope for another day's gift of breath.

Old age is not, as the saying goes, for sissies. There are some lucky ones who little by little slow down to be sure, but otherwise go on to the end pretty much as usual. For the majority, however, it's like living in a house that's in increasing need of repairs. The plumbing doesn't work right anymore. There are bats in the attic.
​​
— Frederick Buechner, Beyond Words

Here are the proper occupations of old age: prayer, which is the quickening of the mind, the rooting of the attention in the ground of being; song, which is the expression of spontaneous joy in the harmony of the chaos; the telling of old tales, which among all primitives was the supreme function of the old, who passed on the wisdom . . .
— Helen M. Luke, Teach Us to Number Our Days by Steven McFadden

That is no country for old men. The young
In one another's arms, birds in the trees
—Those dying generations—at their song,
The salmon-falls, the mackerel-crowded seas,
Fish, flesh, or fowl, commend all summer long
Whatever is begotten, born, and dies.
Caught in that sensual music all neglect
Monuments of unageing intellect.

An aged man is but a paltry thing,
A tattered coat upon a stick, unless
Soul clap its hands and sing, and louder sing
For every tatter in its mortal dress,
Nor is there singing school but studying
Monuments of its own magnificence;
And therefore I have sailed the seas and come
To the holy city of Byzantium.

O sages standing in God's holy fire
As in the gold mosaic of a wall,
Come from the holy fire, perne in a gyre,
And be the singing-masters of my soul.
Consume my heart away; sick with desire
And fastened to a dying animal
It knows not what it is; and gather me
Into the artifice of eternity.

IV.
​
Once out of nature I shall never take
My bodily form from any natural thing,
But such a form as Grecian goldsmiths make
Of hammered gold and gold enamelling
To keep a drowsy Emperor awake;
Or set upon a golden bough to sing
To lords and ladies of Byzantium
Of what is past, or passing, or to come.
Open Horizons